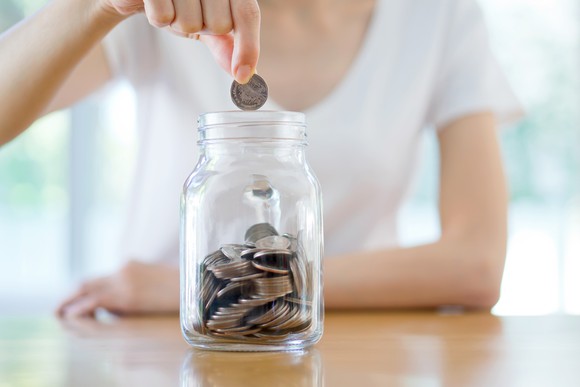 If You’re in Your 40s, Consider Buying These Stocks

Forty-something investors may want to grab some shares of American Express, Bristol-Myers Squibb, and Starbucks soon.

Forty-something investors shouldn’t necessarily shy away from risk altogether, but it is a good time to start pivoting toward more traditional large-cap companies that pay dividends. Keeping with this theme, our Foolish contributors think investors in their 40s may want to take a look at American Express Company (NYSE:AMP), Bristol-Myers Squibb (NYSE:BMY), and Starbucks (NASDAQ:SBUX) right now. Here’s why.

Jason Hall (American Express Company): You won’t hear me arguing that AmEx hasn’t had a relatively rough year-and-change. It lost major customers such as Costco, and many fear that the company could see its pricing power erode in coming years as competitors go after its position as the high-end charge card of choice for the well-heeled spender. American Express has seen its profits fall after the Costco loss, and the market has seemingly lost any faith in the company’s ability to recover, much less grow.

But considering the general fundamental strength of the U.S. economy, that looks like the wrong assessment in the short-term, and — more importantly for fellow 40-somethings — a tremendous opportunity for long-term investors. If you’re in your 40s, American Express is a wonderful stock to buy today and ride for the next two (or more) decades.

To start, AmEx is super-cheap today, whether by book value or earnings multiple: 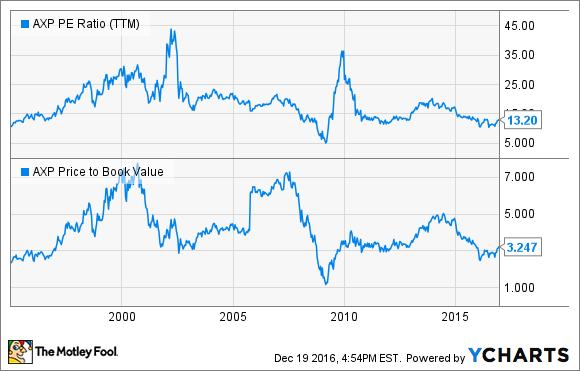 In other words, even if American Express isn’t able to grow its earnings very quickly going forward, you’re getting a fair price.

But here’s the kicker — I find it hard to believe that the company won’t have mostly overcome its recent problems over the next five years. This is particularly true when you consider the big-picture trends.

Bottom line: American Express is a wonderful, very profitable company that has excellent long-term prospects and is selling cheaply today. Investors in their 40s have the time to be patient while the company works through its current challenges and takes advantage of long-term trends.

This pharma stock will head higher over the long haul

George Budwell (Bristol-Myers Squibb): Bristol-Myers Squibb is arguably a top stock for investors in their 40s to own because of the company’s strong competitive moat in the cancer immunotherapy space, its sky-high 5-year forward-looking CAGR of 18%, and its respectable dividend yield of 2.66% at current levels. Perhaps as an added incentive to buy and hold this pharma stock for the long-term, Bristol’s shares are currently 14% off of their 52-week highs, potentially making them a great bargain buy.

But I think the most compelling reason to buy this pharma stock is the ongoing sea change in the high-value oncology drug space. In a nutshell, immuno-oncology treatments like Bristol’s market leading Opdivo are rapidly displacing chemotherapy once they enter the market. Although this pivot toward immuno-oncology medications isn’t surprising given their frequently superior efficacy profiles compared to chemotherapy, the impact on Bristol’s top line growth trajectory is probably being underappreciated by a wide margin right now.

In short, the cancer drug market — which has been dominated by chemotherapy products for decades — is already valued at over $100 billion, and is forecast to reach $147 billion by 2018. So if doctors continue to favor Opdivo over traditional chemotherapy regimens whenever possible, Bristol clearly stands to benefit as the industry leader in immuno-oncology. After all, Opdivo has already racked up five indications from the FDA, and is currently in dozens of ongoing trials that should lead to even more label expansions down the road.

This stock isn’t cooling off

Dan Caplinger (Starbucks): Investors in their 40s will remember very well how Starbucks came to prominence, translating the experience of an intimate coffeehouse into the global empire that it enjoys today. Nowadays, it’s hard to go anywhere without being near a Starbucks location, but wherever you go, loyal customers throng to get their daily brew — and building a reliable customer base has been a key part of Starbucks’ long-term success.

Many see the recent decision by CEO Howard Schultz to give up the leadership role at the coffee giant as a negative for the stock. Admittedly, when Schultz gave up the top spot in 2000, Starbucks stock fell sharply. Yet much of that decline seemed related more to the end of the tech boom, which had benefited Starbucks in part because of its Seattle location. More importantly, Schultz will remain strongly connected to the company this time around, working on its higher-end Starbucks Reserve Roasteries locations. With the ability to tap into demand for an ultra-premium experience, Starbucks will continue to benefit from Schultz’s leadership even as it continues with its core expansion and growth initiatives. In the meantime, shareholders can simply look at the long lines at their local Starbucks location and smile at the money pouring into the company’s coffers as they watch share prices climb.