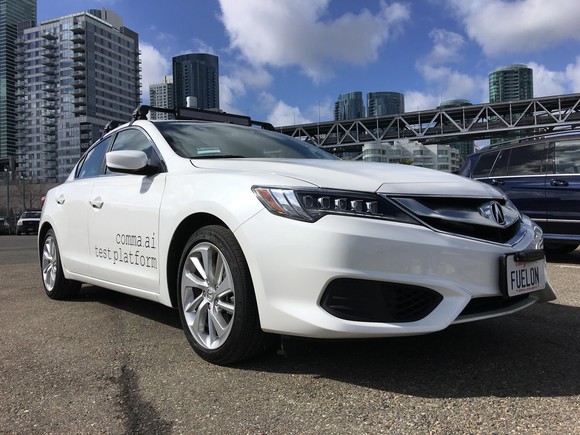 What Investors Can Learn From This Failed Self-Driving Start-Up

Its CEO is a brilliant hacker. It had a potentially disruptive product idea and big-name venture funding. But at the last minute, this company hit a very predictable pothole.

Here’s a cautionary tale for any investor looking for “disruptive” opportunities. I’ll warn you up front that at first this might seem a little like inside baseball. But there’s a big lesson here that’s applicable far beyond the narrow intersection of tech and autos.

In three tweets, a potentially disruptive start-up became a footnote

Venture-funded start-up comma.ai, run by famed hacker George Hotz, announced on Friday morning that it has canceled its plan to bring an aftermarket driver-assist system similar to Tesla Motors’ (NASDAQ:TSLA) Autopilot to market.

In a series of three tweets on Friday morning, Hotz said that his company had canceled the launch of its system, called “comma one,” after receiving a pointed inquiry from the U.S. National Highway Traffic Safety Administration (NHTSA).

The comma.ai system was expected to be an add-on package that would give a car some limited self-driving capabilities in highway situations, like Tesla’s Autopilot. It would include a set of front-facing sensors and a camera, and was expected to sell at a retail price of just $999. Initially, it would be compatible with only a few kinds of vehicles, but the company said it would increase the number of compatible cars as it refined the system over time.

At first glance, it seemed like a promising idea, not least because of the low price. But now, those plans are off.

You can read NHTSA’s letter to Hotz on Scribd via the link in the tweet. In a nutshell, the Feds strongly urged Hotz to hold off on selling his system until it could be extensively tested, and demanded detailed answers to a long list of questions about the technology. Here’s the key quote, which was in bold in the original:

We are concerned that your product would put the safety of your customers and other road users at risk. We strongly encourage you to delay selling or deploying your product on the public roadways unless and until you can ensure it is safe.

The letter included a “Special Order” demanding answers to a long list of questions about comma.ai’s system by Nov. 10.

The opportunity looked like a no-brainer, until it didn’t

It was a surprising change, not least because Hotz has been trash-talking auto-industry incumbents for months. One of Hotz’s most frequent targets has been Mobileye(NYSE:MBLY), an Israeli firm that supplies advanced assisted-driving technology to over 20 automakers — including, until recently, Tesla itself.

Hotz has made no secret of his belief that Mobileye is slow and its technology is outdated. Here’s just one example, from an extensive Bloomberg profile of Hotz from last December:

[Hotz] thinks he can challenge Mobileye, the Israeli company that supplies Tesla Motors, BMW, Ford Motor, General Motors, and others with their current driver-assist technology. “It’s absurd,” Hotz says of Mobileye. “They’re a company that’s behind the times, and they have not caught up.”

There’s no doubt that Hotz is smart. He famously became the first person to hack an iPhone, when he was just 17. A few years later, he became the first to hack a Sony Playstation 3. More recently, working in his garage, he built a self-driving system for his own car. That’s what drew Bloomberg’s attention — and that attention drew others’.

PART OF THE “COMMA ONE” SYSTEM. IMAGE SOURCE: COMMA.AI.

But now those plans have changed, because Hotz ran right into some big moats.

The auto industry is dominated by a small number of big companies that have been in existence for decades. That’s because the industry is protected by a couple of huge moats.

First, as Tesla’s recent experience has made clear, profitably manufacturing cars to global standards of quality is really, really hard. Decades of fierce competition between well-funded incumbents has raised consumers’ expectations to a very high level.

That in turn means that companies looking to supply parts or systems to the big automakers have to be prepared to put their products through extensive testing to ensure that they’ll perform as required — safely — for the life of the vehicle in which they’ll be installed. That process is called “validation testing.” Without that testing, which for a complex new technology can take months or years, no automaker will install the product in its cars.

The second moat is related to the first: The auto industry is highly regulated. Not just in the U.S., but all over the world. It’s only recently that the NHTSA has begun to focus on advanced driver-assist systems (ADAS) like the “comma one.” But it was inevitable that it would step in, impose standards, and take a hard look at any company trying to bring ADAS to market.

Mobileye understands all of this. It’s working with giant industry suppler Delphi (NYSE:DLPH)to bring a complete self-driving system to market for any automaker that wants it. But the system won’t be ready until late 2019 — because it will take that long to test and refine it to the satisfaction of the automakers and regulators.

So what’s the lesson for investors?

Hotz is clearly very smart, and he was backed by smart investors with a good track record. They all looked at the auto industry and saw an opportunity to create a new business that could prove disruptive in time. That was exciting, and so they headed to market — without a clear understanding of the risks and pitfalls of the market they were entering.

What’s worse in this particular case is that Tesla warned them. Look at this excerpt from a statement that Tesla issued in response to that Bloomberg profile of Hotz:

We think it is extremely unlikely that a single person or even a small company that lacks extensive engineering validation capability will be able to produce an autonomous driving system that can be deployed to production vehicles. It may work as a limited demo on a known stretch of road — Tesla had such a system two years ago — but then requires enormous resources to debug over millions of miles of widely differing roads.

This is the true problem of autonomy: getting a machine learning system to be 99% correct is relatively easy, but getting it to be 99.9999% correct, which is where it ultimately needs to be, is vastly more difficult. One can see this with the annual machine vision competitions, where the computer will properly identify something as a dog more than 99% of the time, but might occasionally call it a potted plant. Making such mistakes at 70 mph would be highly problematic.

(The statement is unsigned, but the droll humor certainly sounds like Elon Musk’s. It’s quite possible that he wrote it himself.)

The lesson is that even smart, skilled investors can get so excited about the potential for a disruptive new technology that they don’t see (or perhaps don’t want to see) the potential pitfalls. They might not even hear warnings from sources they should know to trust. That doesn’t usually work out well.

10 stocks we like better than Apple
When investing geniuses David and Tom Gardner have a stock tip, it can pay to listen. After all, the newsletter they have run for over a decade, the Motley Fool Stock Advisor, has tripled the market.*

*Stock Advisor returns as of October 3, 2016
The author(s) may have a position in any stocks mentioned. The Motley Fool owns and recommends shares of Apple.