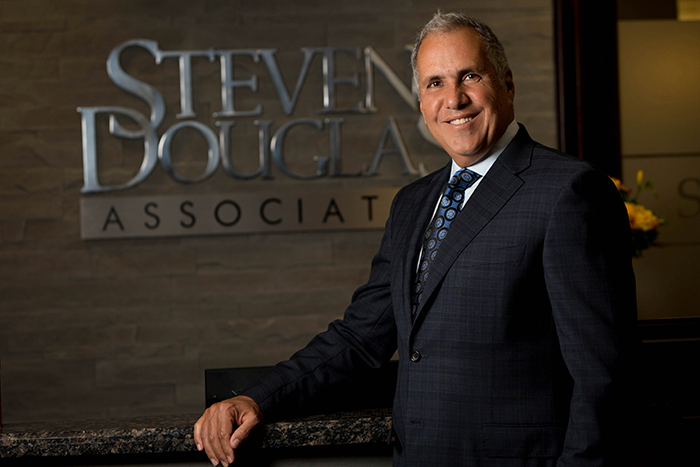 It All Adds Up

Steven Sadaka decided early on that he wasn’t really cut out to be an accountant. Smart move, because he was much better at recruiting them.

Sadaka established Steven Douglas Associates in 1984 as a boutique search firm specializing in accountants and has built it into a $40 million a year revenue company. These days, it covers a broad spectrum of professions and also offers interim help and project services. Revenue has gone up more than 600 percent in the past decade.

Sadaka, who is chairman and CEO, has been able to accomplish that by setting the right culture in an often dog-eat-dog industry and getting key members to join his team, including President Matt Shore, Division President Mark Viner, Executive VP Steve Kalisher and CFO Sylvia Alvarez.

After Sadaka graduated with top honors in accounting from the University of Florida, he started doing government audit work at Price Waterhouse in Little Havana. A senior accountant didn’t even talk to him for a couple of weeks.

He quit in four months.

“I was the worst accountant at Price Waterhouse,” Sadaka quips. In the pre-computer era, he was bored out of his mind doing spreadsheets by hand. He went on to Laventhol & Horwath and taught tennis, too. After a year, at age 22, he’d had enough of accounting.

“I went to a headhunter to look for a job. I mentioned my interest in dealing with people, so he offered me a job to place CPAs,” Sadaka recalls. “He gave me a telephone book and said, “Go find clients!” I had no sales experience.” Moreover, he considered himself a shy bookworm when he was growing up.

He started taking clients to play golf and out to dinner on Friday and Saturday nights. “Now, it’s natural. I like to work with people. I love to solve problems,” says Sadaka, who is known for his sense of humor by those who know him well.

When he was 25, Sadaka started to wonder why he should be giving away half his commissions just for getting a desk and a phone. So he started his own firm, using his middle name as the firm’s last name.

Was it risky? “I didn’t know any better,” Sadaka says. “But I also had established some very loyal clients.” He added a recruiter to his firm at six months and started diversifying into other industries, securing Ryder System, Burger King and American Express as clients.

Banks asked him if he could find information technology help, so Sadaka expanded into those lines. He found Kalisher, who had his own IT recruiting firm.

Steven Douglas was profitable its first year and has been profitable every year since, except in 2009, when it broke even during the recession.

Steven Douglas has picked up a lot of accolades along the way, including making Inc. magazine’s Fastest-Growing Companies list from 2012 to 2014, the South Florida Business Journal“s list of Best Places to Work in 2009, 2010 and 2014; a Business of the Year Award from the Business Journal in 2008 and 2014; and the Good to Great Award from the Greater Miami Chamber of Commerce in 2010.

About nine years ago, when the company was doing about $4.5 million in revenue, a couple of key steps helped Sadaka further accelerate its growth. He started taking classes from a course called Strategic Coach, which is offered by Dan Sullivan of Toronto who works with entrepreneurs on how to grow their business and enjoy their job.

His next step was getting Shore and Viner to join his team. Sadaka wanted to expand the industries his company had for search and start placing interim help.

Shore says he thought of Sadaka as a high-end competitor and admired him for his integrity and sense of fun. Sadaka pursued him, but Shore says he kept telling him he couldn’t afford him.

Shore and Viner, who were friends, were well on the path to launching a business together, but realized it would be a challenge to get financing and build all the back-office operations. Eventually, Shore says he got together with Sadaka for dinner with their wives.

“We had a great dinner and two-and-a-half hours went by like nothing,” Shore says. “We got in the car and as soon as the door closed, my wife said, “Take the job.”” He decided that it was worth taking a short-term pay cut for a long-term gain.

The big challenge came a couple of years later when the recession hit. “We turned it into an opportunity,” Shore says. “Many firms were laying people off and micromanaging them. We stuck to our culture. We pay people great and were able to attract some talent – people that before wouldn’t return our phone calls. People that were untouchable.”

Sadaka and Shore helped build the company culture by giving back to the community. In 2010, Sadaka launched the “Read to Succeed” initiative, which has raised $1 million for the Jason Taylor Foundation’s literacy program for students. In 2014, Shore was named chairman of United Way of Broward County.

That same year, he also helped a friend build a 6,000-square-foot cigar bar in Weston called Smoke on the Water, which is also a site for charity fundraisers.

Three years ago, with the recession fading, Steven Douglas moved to a new home in Lakeshore Plaza near Sawgrass Mills mall. The firm recently added 3,500 square feet to bring it up to 10,000 square feet total.

Today, Steven Douglas has about 230 people on its payroll, including 50 full-time recruiters and 185 on its project and services team. For someone who decided not to be an accountant, Steven Sadaka’s numbers are adding up pretty well. ?

Approach: An eight-step Talent Acquisition Solution process, trademarked by the company, which aligns expectations with the market, promotes accountability, sets a timeline and involves clients in the process.