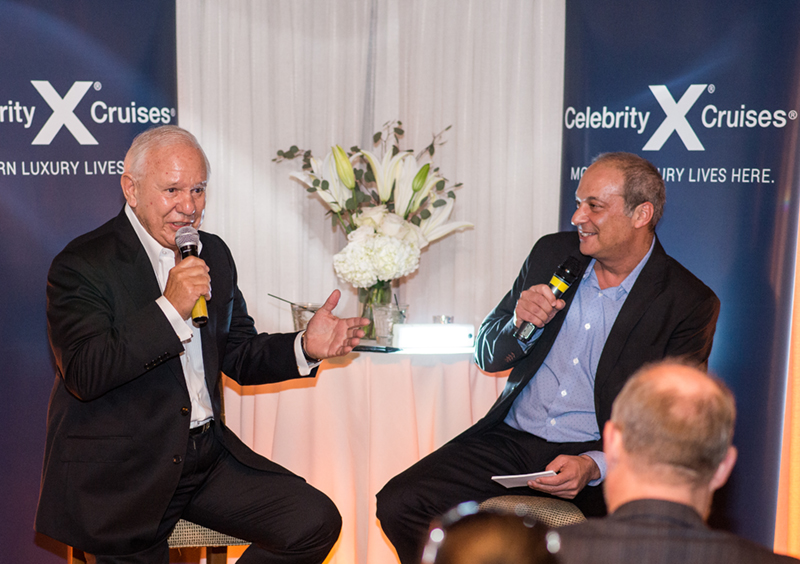 It’s all in the Details

Bob Roscioli started his career in the marine industry in 1962. Within a year’s time, he began to develop the painting technique that would culminate in his world-renowned marine companies, Roscioli Yachting Center and Roscioli Donzi Yachts.

The 100-employee Roscioli Yachting Center is a multimillion-dollar, full-service yachting facility. It has an array of specialists in captaining, electric, electronics, carpentry, fiberglass, welding, painting, mechanics, propulsion and interior design.

Roscioli became a dealer for Donzi in 1985 and acquired the company a year later. The boats are designed to have classic, fluid lines, and are known for their ruggedness, seaworthiness, agility and high-end finishes and interiors.

Roscioli works together with his wife, Sharon, and their children, Heather and Robert.

Roscioli was interviewed at Grateful Palate Catering & Events, which is on the Intracoastal Waterway in Fort Lauderdale.

Tell us about your early life.

I was born in 1956 in Philadelphia and we later moved to Fort Lauderdale. I was a Stranahan High School graduate. I became a lifeguard for three years, and finally I decided I had to do something with my life. I started washing boats, cleaning boats and working on docks. They offered me a job in a shipyard.

I learned how to paint and mastered brush painting. If you had to ever brush paint a yacht, you had to be meticulous. I practiced and I practiced. I watched other people who were good at it.

I worked 15 years as a master brusher. People would seek me out to brush their boats. This was along State Road 84 before Interstate 395 was built. I would rent sheds and the boats would come up there.

Then all of the sudden they came out with urethane spray painting. I don’t know how to spray-paint. I’m a brush master. I went to Sears and bought a spray gun.

I told someone, “I’ll paint your boat for a few hundred bucks.” I painted it four times. I brought the gun back to Sears and said it didn’t work. I didn’t know you had to clean it.

I became one of the best in the world at spray-painting. They came from all over the world to have me spray-paint their boats. I worked day-to-day and paid $5,000 a month for rent.

Then the highway came along and I had to get out. I had 25 painters, seven carpenters, building boats and repairing. I asked myself, “What do I do now? If I fail, I lose everything.”

A man from Bradford Marine bought the place I have today and said, “I don’t want to run a shipyard. Would you like to lease it?”

It changed my whole life.

I understand there was a turning point in your life that happened after you asked for a nickel raise.

I worked in a shipyard, sanding bottoms. I had to do all the prep work. They treated me as a lower-end employee and paid me $1.10 an hour.

I worked for nine months and started to do a lot of good work. I asked, “Can I get a dime raise?” Later I said, “Gee, I’ve been waiting three weeks, and I haven’t got a raise. Just give me a nickel.”

The next week, they fired me. They didn’t like my attitude.

I got my little Roy Rogers lunch box and walked under the bridge on Fourth Avenue and said to myself, “I’ll never get fired again.”

Paint a picture of what it would look like if we walked into Roscioli Yachting Center.

When you walk in at 7 a.m., it’s very intense. We have about six guys that work closely with me. I believe in surrounding yourself with good people—people you can count on 100 percent. I have people who came to work with me at 16 and 18 and they have been with me 25 to 30 years.

It’s a beehive of large megayachts, 110 to 150 feet long. We have a travel lift that can lift 400 tons. We’re dealing with captains and customers with about 100 people in the yard. It’s a busy place—it never stops. I leave about 5 o’clock. It’s a busy day for all of us. The whole family works every day.

You have sold to some amazing people. Tell us about that.

Ray Kroc from McDonald’s was one of our first customers. I had his personal phone number and he would invite us to his house. I knew Charles Walgreen Jr. for 30 years. He used to visit me all the time.

One day, Roy Culver [founder of tire recapping company Bandag] called me and said, “I hear you are the best painter around, including Europe.” I said, “That’s quite an honor, and I guarantee anything that I do will be right.”

He asks to meet me at the Jockey Club. I get in my car and I have paint all over my pants. He has the whole top floor of the Jockey Club. He owns a 140-foot Feadship, the largest that ever came up the New River.

It all starts with a passion. There are a lot of CEOs here who own larger companies than I do. I work hard every day looking at every job.

I talk to all my men, from my sweeper to the top. I worry about how much stuff is on the ground and how is the guy doing his job.

The meetings are quick-hitting. I believe in getting on the job and getting the work done. We have meetings a couple of times a week. I meet with the foremen twice a week with 15- to 20-minute meetings. We have 20 to 25 jobs at any one time in the shipyard. We have to stay on schedule with everything we do.

I don’t sleep good at night. Two hours and I’m awake. I sleep a couple of hours here and there. Before you know it, you are up. I worry about clients and helping people. I want to make sure it runs smooth every day.

Are you bullish on the economy?

I’m excited as hell right now. This man has who been elected, I think you will see one of the most exciting things in history in the next five or 10 years. This guy is not just a president—he’s an animal. He already has the jobs covered.

Tell us about your Donzi sports fishing boats.

I wanted to build a boat that you are not going to have to fix, because I used to have to fix them. I’m going to build them so everything is accessible. It will run fast and run strong.

As a business owner, what has been your biggest challenge?

What is the biggest failure you have learned from?

I never looked at failures. I thought they were setbacks and had to overcome challenges. I’m going to fight through it and bust through it to not be that failure. ↵

The CEO Connect was held at Grateful Palate Catering & Events

South Florida Business & Wealth’s CEO Connect series is an exclusive, invitation only monthly event that brings together South Florida’s top business leaders to meet, mingle and talk amongst their peers. Presenting Sponsor is Celebrity Cruises, Gold Sponsors include Greenspoon Marder, Shorecrest Construction, TD Bank, Optime Consulting and Grateful Palette. The evening begins with a cocktail reception for about 100 guests followed by the highlight of the event, a live interview between Gary Press, Chairman & CEO of SFBW and a prestigious C-Level Executive providing insight into their personal lives, careers and views on issues affecting the business community. Partnering with SFBW on this exclusive event will provide the opportunity to network with the area’s business elite, generate new business opportunities and increase brand awareness in the community. For more information about event sponsorship opportunities, please contact Clayton Idle atcidle@sfbwmag.com.