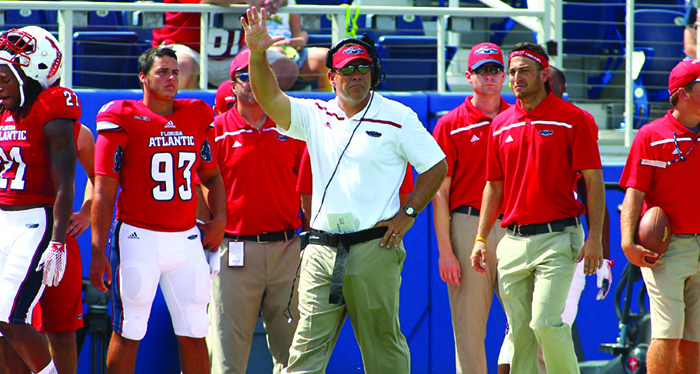 Man on a Mission

Everything you need to know about the head football coach at Florida Atlantic University fits on a wallet-sized card that each of his players are expected to carry. On one side are the team’s five rules: Be on time, don’t do drugs, make good decisions, respect others and compete.

On the flip side is a reminder from Charlie Partridge to “get out” when confronted with a situation that could embarrass or hurt the program.

“That’s what real men do,” says Partridge, who begins third season at the helm when FAU hosts Southern Illinois on Sept. 3. “The childish thing is to stay and engage. When you know there’s trouble, leave – and get everyone you love and care about out of there with you.

“Someone will make a mistake. I know that. And we’ll address it and deal with it. But our culture is now sustainable. And that will lead to victories.”

Three years ago, following the abrupt departure in November 2013 of second-year coach Carl Pelini amid allegations of drug use, football at FAU felt rudderless on and off the field. In dire need of a steady hand, the program turned to a straight shooter with local ties (Partridge is from Plantation), a strong sense of family, purpose and direction – and no head coaching experience.

The record book may show consecutive 3-9 seasons under Partridge, but wins and losses don’t tell the entire story. Something is brewing on the campus at Boca Raton, a sea change that extends to the classroom where, last year, more players recorded a GPA of 3.0 or higher than any year in school history.

As a player, Partridge was an undersized defensive lineman and three-year starter at Drake, the same school that gave him his first coaching job in 1996. Back then, he relied on raw emotion because “I always felt I had something to prove.” As a coach, Partridge is seeing the bigger picture – and doing so with greater clarity every day.

He shares some of what he’s learned over the years.

Straight talk: “Through years of recruiting the South Florida area, I established a reputation: I may not tell you what you like, but I’m going to tell you what’s truly going on. Sometimes, that line gets blurred in recruiting.”

Savor each second: “More than anyone I’ve been around, J.J. Watt (the three-time NFL Defensive Player of the Year for the Houston Texans who Partridge coached at Wisconsin) understands the clock. He knows that the clock is always ticking. He has a finite amount of time to accomplish everything he wants to accomplish in life, so he takes advantage of every minute.”

Unsung hero: “When I was at Iowa State, I was promoted to director of football operations (in 2000). It wasn’t my calling; I wanted to coach, and my wife knew it. At the time, I was making somewhere around $60,000. … I got a chance to coach at Eastern Illinois for, I think, $30,000. I said, ‘Honey, we have a chance to go coach in Charleston, Illinois, and my pay is going to get cut in half.’ I didn’t even have a chance to finish the sentence. ‘Let’s figure out how to make it work,’ she said. My wife is incredible.”

Eye on the prize: “The best teams that I’ve been a part of have been the ones with the fewest distractions. The sheer volume of our distractions has dramatically decreased from when I first got here.”

Brick by brick: “I talk to our kids about this. When an office building is being constructed, you don’t see much happening for months – and then, all of the sudden, it’s up. What was happening all those months? They were building the foundation. We’re at that level now. Culture has inertia. It’s hard to get going, but when it starts, it’s hard to stop the momentum.” ↵