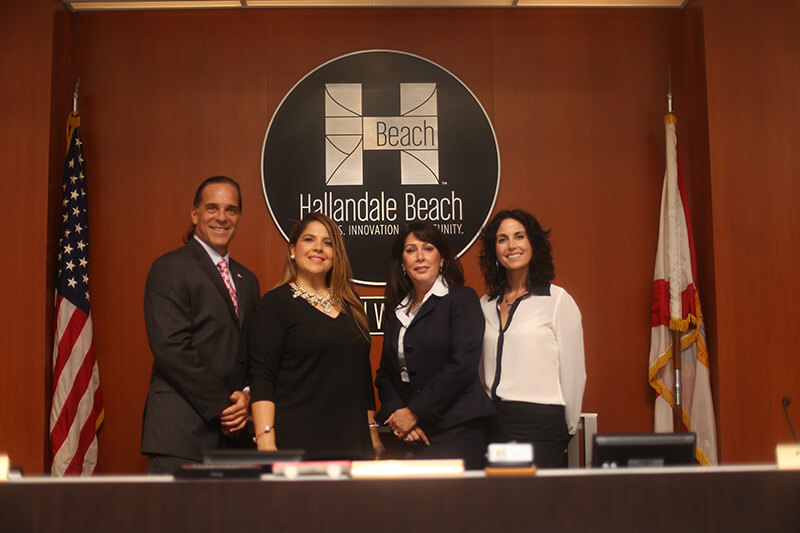 SFBW invited the mayor, vice mayor and city commissioners to give their thoughts about the city. Answers from those who responded are below and were edited for brevity and clarity.

Mayor Joy Cooper: Hallandale Beach is small geographically in size, but home to two of South Florida’s racinos: Mardi Gras and Gulfstream. We also are home to the Diplomat Golf Course and Resort. We have a wonderful beach and a variety parks for all ages.

Vice Mayor Keith London: The diversity of our people makes Hallandale Beach a great opportunity to experience multi-cultural living, dining and entertainment. We are located between two major air and seaports. Gulfstream Park is host to the Pegasus statue (the largest bronze work south of the Statue of Liberty) and a namesake horse race offering the largest purse in the world.

Commissioner Michele Lazarow: There is a place for everyone. We are a diverse community that boasts housing that’s affordable for seniors and middle-class families in every neighborhood. Even our most expensive neighborhood, Golden Isles has age 55 plus apartments that rent for less than $1,000 per month.

What excites you the most about what’s happening in Hallandale Beach now?

Cooper: Our three major attractions are going through transformations. Mardi Gras has major plans to redevelop, Gulfstream continues to implement a robust master plan and the Diplomat is slated to refurbish the golf course and add hotel/condo and condo units. Our city is now implementing our parks master plan through a general obligation bond. The $58 million-dollar investment will afford residents and visitors a state-of-the-art green park system.

London: The new city commission and new administration are taking the best of our past and blending it with new technology to create a city of the future. Facilitating opportunity, so residents and businesses can reach their full potential is a high order priority for me and the new commission. By providing consistent, transparent rules and regulations, Hallandale is attracting new business and new projects that provide a quality lifestyle.

Lazarow: The change. I repeat—THE CHANGE. Following November’s election, the city has a new commission, manager and attorney. Most of all, we now have professionals rather than politicians running the city. The days of corruption ruling city hall are over.

How do you see your role in the relationship between government and business?

Cooper: I have always believed as mayors we are stewards of Main Street. I have focused on streamlining permitting and encouraging a collaborative environment. It is essential municipal government works in partnership to help businesses get their problems solved.

London: Clear, consistent rules and regulations fairly applied so each party understands the process and expectations of the all partners sitting around the table.

Lazarow: As a commissioner, I have an obligation to foster a business-friendly environment. It’s about balance. I want investors to put their money in Hallandale Beach. I just don’t want them to expect that the quality of life of our residents will be disregarded when the commission votes.

What are your top economic development priorities?

Cooper: I saw a glaring need to create a true vison for our future. Our master plan was developed with collaboration among city government, residents and many stakeholders. The goals were to address redevelopment demands while still protecting our infrastructure needs and our community.

I was instrumental in spearheading form-based codes within our regional activity center to enhance development opportunities. The system helps developers understand what can be built where and removes the long approval process. It still ensures developers pay their fair share for our infrastructure needs.

We are also in the visioning process for the final nine years of our community redevelopment agency. How we leverage this resource to ensure strategic investments will be critical to our economy’s vitality.

London: Providing an appropriate level of regulation that ensures our quality of life while not inhibiting economic development. Providing infrastructure needed to meet the needs of growth with the costs shared with developers.

Lazarow: Smart growth is key. Our city is fortunate to have big taxpayers like Gulfstream and rising residential property values. As we grow, we have to do it in a smart way. That means considering impacts on traffic, infrastructure and overall quality of life.

How do you balance new real estate projects with residents’ concern over traffic?

Cooper: We are densely populated at more than 8,000 people per square mile with only two major corridors. We have very limited opportunity to add or replace roads that were given up by former commissions. The challenge is educating our residents on property rights, transit priorities and the new era in transportation and technology that is changing the way we look at redevelopment.

We are also reevaluating our impact fee structure to ensure developments are paying their fair share of need they will create.

London: The top three issues in Hallandale Beach are traffic, traffic, traffic. Requiring new developments to pay their fair share for the impact they are creating to our mobility system is only fair. Properties come with certain development rights, but if owners want added entitlements, they should be prepared to provide additional benefits to residents.

Lazarow: I live here, too. I don’t want to fight more traffic. I also recognize that if we aren’t updating our real estate, we’re going to struggle in the future. Developers need to be prepared to help mitigate the impacts they make on the city. I will vote for projects that add traffic, but I won’t vote for projects that don’t make an effort to contribute to solutions.

What does the city want to accomplish over the next decade?

Cooper: I would like to see the completion of our parks master plan that is being constructed over the next four years. We have already conducted a full evaluation of our city’s infrastructure needs, which will cost more than $200 million. We are contemplating how we can generate funding streams.

London: Have a strategy developed through consensus with well-defined benchmarks. Continually evaluating the strategy’s progress and holding the city manager’s office accountable for delivering on the vision of the city commission and, by extension, the electorate.

Lazarow: We need to rebrand. That’s not about a logo or a sign. It’s about the way people see us. Unfortunately, we are still fixing problems that have been created over more than a decade of mismanagement. Fortunately, we are on the right track now.

We have to rebuild our reserves after having them depleted by approximately $30 million over the last five years.

Is Hallandale Beach gaining more of an international flavor with its redevelopment and new residents?

Cooper: Absolutely. We have always been culturally diverse. It is what makes us great. We have seen an uptick in redevelopment of many smaller scale projects from South American developers.

London: Gulfstream Park owners have invested over a billion dollars into their world-class facility. RK Properties has redeveloped multiple shopping centers in our community. RK owns and manages properties up and down the East Coast. Currently, the first Class A Platinum LEED office building is being built by a Mexican team. In addition, we have groups from the United Kingdom, Argentina, Venezuela and Columbia.

Lazarow: Hallandale Beach has long had an international flavor. We have residents from all across the globe, with a large population of Canadians and Russians. New luxury development in South Florida always attracts international buyers. We welcome the diversity of culture.

Mayor Joy Cooper was first elected to the Hallandale Beach City Commission in 1999. She has served as commissioner, vice mayor and is the first directly elected mayor in the history of the city. She was born in Trenton, New Jersey, and grew up in Levittown Pennsylvania. She made Hallandale Beach her full-time home in 1991.

Vice Mayor Keith S. London, a Philadelphia native, moved to South Florida in 1979. He has been a resident since 1992. He owned and operated three successful businesses before he decided to run for public office in 2005. London operates a consulting business providing strategy and community outreach to businesses.

Commissioner Michele Lazarow was born in New York City and moved to South Florida in 1970. After returning from college, she has been a Hallandale Beach resident since 2001. She opened a boutique, Absolutely Fabulous, in Hallandale Beach in 2005. Lazarow was elected to the commission in the 2012 election.

Commissioner Anabelle Taub was born in Haifa, Israel, and raised in New York. She spent the early part of her adult life as an EMT-Paramedic. She later became a real estate broker and is now working up the street from Hallandale Beach at Beachfront Realty in Aventura. She was elected to the commission in November 2016. k