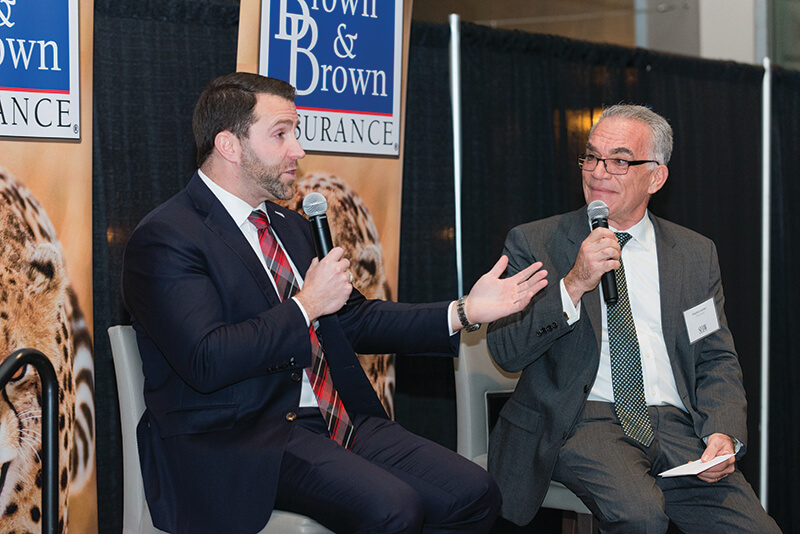 Matthew Caldwell has his attention on the team’s business matters

Matthew Caldwell is president and CEO of the Florida Panthers and Sunrise Sports & Entertainment, joining the organization when Vincent Viola and Doug Cifu purchased the team in 2013. He previously was chief operating officer for the Panthers.

Caldwell has worked with Panthers ownership previously and has helped with a number of their operating companies, including Eastern Air Lines Group and VersaMe, which makes a child development product. Before joining the Panthers, Caldwell was a vice president at Goldman Sachs in its investment management division, where he helped families and institutions invest their capital.

Before working in the finance industry, Caldwell spent five years as an Army officer. He conducted combat operations in Iraq, peacekeeping operations in Kosovo, and trained soldiers in Germany as they prepared to deploy to Iraq and Afghanistan. Caldwell earned a law degree from Northwestern University School of Law, an MBA from Northwestern University’s Kellogg School of Management, and a bachelor’s degree from West Point.

For this edition of Veteran of Influence, SFBW columnist Stephen Garber, CEO of Third Level, interviewed Caldwell at the BB&T Center in Sunrise.

Part of your goal is to have the BB&T Center become an entertainment center for South Florida as well as make the Panthers a real icon in the community. How are you going to do that?

First off it comes down to winning, especially in South Florida. And that’s really become true in any market; you have to win. We haven’t won that much, but we had a lot of success early on. We are investing a ton of money into getting good players, and importing a great coach, Bob Boughner [former assistant coach of the San Jose Sharks], who we are super excited about. The product has to be great if you want people to follow you. But on top of that, I am very confident in our concert business. You can just look at the shows we put out.

Digging deeper than that, on top of winning, I think it is very important to be stewards of the community. During the aftermath of Hurricane Irma, we opened our doors to house first responders and we not only did that because it is the right thing to do, but we want people to see that we are more than a hockey team. We are here as role models, and we want kids to come to games and really have great experiences.

I think we have the community business side figured out, and I think people see that in our brand, but now it is about winning as we intend to combine the two. We will become a powerhouse in South Florida.

What exactly does a CEO of a hockey team do?
I focus on the business side of the whole operation. So, season tickets, sponsorships, merchandise, food and beverage—all the revenue streams that come into the business, I run. I have a great team that focuses on each individual area. I’m very involved with the budget and community outreach. I control all the relationships with Broward County. They own the building in a private-public partnership. On the hockey side, I try to stay off the ice.

This edition of Veterans of Influence was held in the Chairman’s Club at the BB&T Center.

You’ve fought combat in Iraq and later trained soldiers in Germany. How did the two experiences help form you into the leader you are today?

When you’ve been in combat, it does give you a perspective on life. If you’ve had a long day and you’re working late, and you’re tired, at least there’s no bullets flying at us, right? You can go to bed at night, feeling good, that there are people who have it much worse. I say the No. 1 thing the military has taught me is leading from the front. You can’t expect someone to do something, unless you are willing to be right there with them. Not having an ego, and always putting the company and the team first, is something the Army has instilled
in me.

On Monday mornings, you’ve been known to lead a “battle rhythm” meeting with team. You also ring a bell and do pushups when a team member makes a sale. How do these actions motivate the team or help productivity?

Yes, we have a bell. And when a sales representative sells a season ticket, we ring the bell to fire up the whole sales floor. And I used to sit right in the middle of the floor, I’d jump down and try to knock out 10 or 20 pushups for each season ticket that we would sell. In a suit and everything.

Would you share some of the initiatives that the Florida Panthers do to honor veterans in our community?

Another thing that we are very proud of—at every game we honor a veteran. When we bring out our national anthem singer, the veteran walks out on the center ice. Prior to the game, we go to the veteran’s home and we interview them, hear their story and take clips of that and during the second period we will play it on our scoreboard. This program has completely taken off. ↵

About Veterans of Influence

SFBW’s Veterans of Influence series is an exclusive, invitation-only, quarterly event that brings together South Florida’s top business leaders to meet and mingle.

The evening begins with a cocktail reception followed by a live interview of a C-level military veteran who provides insight into their personal lives, careers and views on issues affecting the business community.

The presenting sponsor is Brown & Brown Insurance and the gold sponsors are CenterState Bank, BB&T Center/Florida Panthers and Third Level.