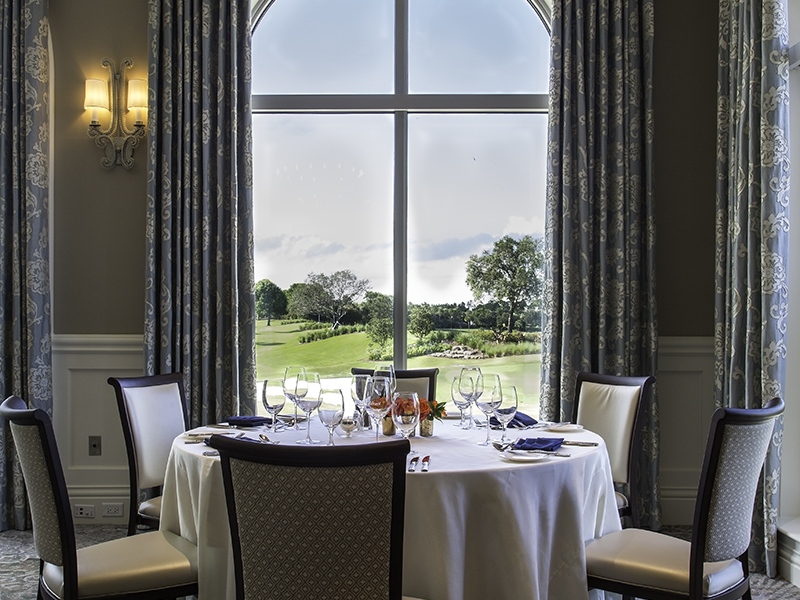 Today’s golf club isn’t the same as the one appreciated by your cigar smoking grandfather.

he latest trends in making a clubhouse cool focus on one major theme: amenities. In this land of myriad country clubs, a lot of competition exists to attract new members as well as keep current members, says Brian Idle, president of Peacock + Lewis, an architectural firm that has designed—or redesigned—many South Florida clubhouses.

“One of the biggest trends today is making the club multi-generational,” Idle says. “The amenity package more resembles a resort rather than a traditional club.”

Idle says today’s clubhouses are even adding aquatic complexes with waterfalls, beach entry pools and play areas for the kids. “There are poolside bistros with indoor and outdoor bars,” he says, “and the traditional fitness centers are now being called lifestyle centers. They now relate more to a changing lifestyle of new and younger members. Golf is not as important as physical wellness centers.”

Idle says clubhouses are now being built to provide multi-modality options because of the big age differences in the membership. In addition to the traditional spa massage, he says clubs are adding physical therapy, personal trainers, group exercise, core strength building, and even urgent care medical centers. “The club has become the ‘one-stop’ shop where you can get full service,” he says, “the more amenities, the more age groups and genders.”

As for the older, cigar-puffing gentlemen of yesteryear, times are definitely changing in today’s clubhouses. “It’s a much more active membership,” Idle says. “There’s a lot of salon services with hair and nail care.”

Idle says he’s designed clubs with cyber cafes. “You can get your favorite coffee drink, while you relax and overlook the pool or tennis complex,” he says. “It gets you out of the house. Working members have a club outlet as well.”

With more and fancier amenities being added, people don’t have to go anywhere else. “You can have a ‘staycation,’” he says.

He points to a few different clubhouses Peacock + Lewis designed. “In the Boca area, there’s Woodfield Country Club,” he says. “Their ‘hook’ is they’re the youngest club in the Boca area. The average age is in the mid-to-late 40s. They have the full package with fine and bistro dining by the pool, a big ballroom for banquets. These are all cruise ship amenities.”

He says the Bear’s Club in Jupiter wanted to create a Tuscan enclave, and even one of the oldest, more exclusive clubs in Florida, Indian Creek Country Club in Miami Beach, has begun to feel the pressure to add more food and beverages.

On the following pages is a look at some of the region’s notable clubhouses:

• Designed by Architectural Design and planning group with interiors by Image Design.

• The second rotunda starts off with the club’s boutique, which looks like an upscale department store, then leads to the library and an activities ballroom that seats 500.

• The lower level has a modern shopping experience at the club’s Golf Shoppe as well as an under-roof golf cart staging area.

• A design reminiscent of the “Grand Old Florida” style of architecture.

• Flagler Steakhouse, a fresh take on the classic American steakhouse, is on the second floor. Members and guests are be greeted by a timeless social club vibe with a red, white and blue decor. Other menu items include Italian favorites, vegetarian and gluten-free options. Indoor and outdoor terrace seating is available providing panoramic views of the golf course.

The Country Club at Mirasol

• It won second place in the “Remodel Category” of Golf Inc. Magazine’s “Clubhouse of the Year” contest.

• Mirasol was also awarded the Silver Star Award for Hospitality Design by the American Society of Interior Design for Excellence in design at its April 2017 design competition.

• The formerly 50,000 square foot clubhouse increased in size by 50 percent.

• The upstairs culinary facility was relocated from the center of the building to facilitate sweeping views of the golf course when entering into the lobby.

• Original clubhouse was torn down and rebuilt.

• The new clubhouse is only slightly bigger in square footage, but has been designed with a much bigger footprint.

• A more flexible design to host activities and community events.

• 3,200 bottles of red wine stored in a climate-controlled wine cellar.

• A pool deck offering a panoramic view of the marina.

• Currently under construction with completion slated to be finished in mid October.

• The old clubhouse currently is being gutted in its entirety.

• Dining room and bar will be much bigger, with the bar doubling in size.

• Both will feature a contemporary design with the bar being the focal point, overlooking the world-famous Blue Monster golf course.

• A balcony area allows members to enjoy cocktails while overlooking the No. 1 tee box on the Blue Monster course.

• The second floor was also expanded to provide additional pre-function space. The renovation included a reconfiguration of the club’s O Bar restaurant, as well as a refresh of the Grande Ballroom, The Grille and Terrace Restaurant. All lobby spaces and corridors received an interior design overhaul to create one cohesive design look throughout the clubhouse. The lighting, paint, flooring, décor and furniture was updated throughout.