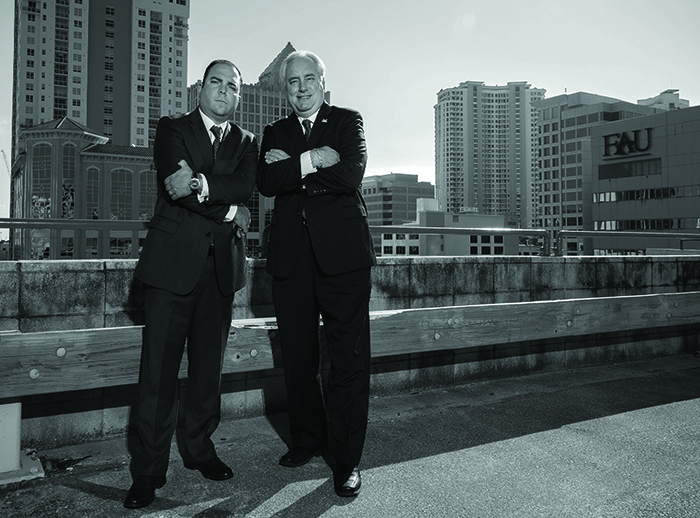 Tell Carlos Arboleda and Mike Moore that there seems to be an air of mystery about what they do – even after looking at their COI Access website – and you are likely to get a big grin.

Going beyond the website’s catch phrase, “Connecting Centers of Influence,” reveals an intriguing mix of how they are strategists, recruiters, talent advisors, matchmakers and troubleshooters.

The firm took a big leap in August when Moore joined COI founder Arboleda and brought his 29 years of experience in accounting, information management and technology. The move was especially notable because Moore is also the current chairman of the Greater Fort Lauderdale Alliance.

Arboleda started the firm at the end of 2011 with 11 years of experience as a senior level executive search and talent advisor at Steven James Consulting.

Still, there’s a bit of mystery left because Arboleda has an unnamed co-founder at COI. He won’t say who that is other than to say he has 20 years of experience at a major law firm and helps with deal flow.

COI Access works on an industry exclusive basis when it comes to non-political lobbying, which doesn’t involve registering in places like Tallahassee. Instead, it utilizes COI’s knowledge of who the key players are in an industry and finding the right person to tell a client’s story.

Their strategy consulting can help with growth strategies or advising on mergers and acquisitions. Moore says he feels liberated by being involved in a broader array of topics than he was earlier in his career.

One of his clients from the beginning of COI is First Bank Florida, which has 10 branches in South Florida. Its parent company is No. 2 in market share in Puerto Rico and is first in the Virgin Islands.

First Bank follows a community banking model, but has grown rapidly in recent years, Arboleda says. It has been involved in public/private partnerships, including enhancements to Interstate 595 and the Miami Port Tunnel.

The bank raised $525 million in capital in 2011 and has great management, including Executive Vice President Calixto Garcia-Velez, who is the leader in South Florida, Arboleda says.

Another notable client is the Cherry Bekaert accounting firm, which has not only had rapid organic growth, but acquired talent that was once part of CBIZ’s Miami office, Moore notes. The South Florida practice, which is led by Managing Partner David Appel, is the fastest-growing geographical area for Cherry Bekaert.

The biggest challenges COI faces in general now are a shortage of top talent and intense competition for deals that can lead to prices being over-negotiated, Arboleda says.

Competition in the field of law and accounting are driving down rates, too. “We are overly saturated here between the mom and pops in professional services to the true global players,” Arboleda says.

Another challenge is that many business owners are still fiscally conservative even though they say their cash flow, balance sheets and reserves are the strongest they have seen in history, he says.

Too many entrepreneurs still have the pain from 2008 to 2009 in the back of their minds, Moore says. “They are afraid to take a leap and we got to get people more entrepreneurial to help the economy. If you believe in the deal, do it.”

In contrast, Arboleda has a concern that the lessons of the recession are fading too quickly in banking, saying, “In the banking sector, we have short memories. We are competing on rates and terms again.”