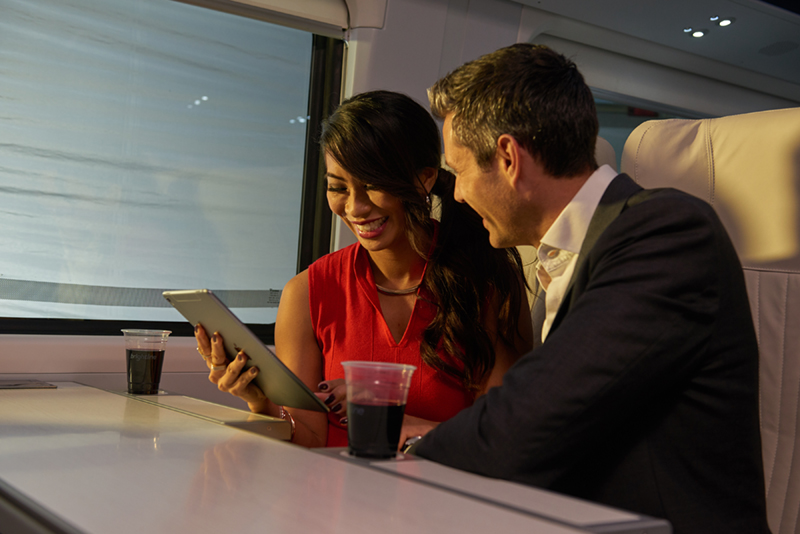 This ISSUE: Part One

Brightline, the Wave Streetcar and the Tri-Rail Coastal Link

Coming in May: Part Two

Brightline will unveil its high-speed rail service this summer, connecting West Palm Beach, Fort Lauderdale and Miami. Tri-Rail trains will serve downtown Miami by the end of the year. And the Wave Streetcar in Fort Lauderdale is scheduled to select its contractor in August.

Brightline is a national novelty as the first privately funded high-speed rail service. While it ultimately will run from downtown Miami to Orlando International Airport, the first link from Miami to West Palm Beach will open this summer.

Brightline already is testing its first train and has opened an operations center in West Palm Beach. Instead of braving Interstate 95 by car, passengers can take an hour-long rail trip from West Palm Beach to Miami, or a 30-minute trip to Fort Lauderdale.

Service will start this summer, but Brightline had not announced a launch date before the deadline of this issue of SFBW.

Inside the locomotive cab of a Brightline train

In June, Brightline will unveil its e-commerce website and mobile app, says Michael Reininger, executive director at Brightline’s owner, Florida East Coast Industries. He expects it to integrate with ride-hailing services such as Uber and Lyft to make a seamless experience for riders, although the stations also will connect to other transit options.

There will be an array of choices for Brightline tickets, ranging from one-way single rides to unlimited passes for a week, month or year, Reininger says. Brightline also plans to work with major venues, such as arenas and performing arts centers, to package event tickets with Brightline service.

Instead of fuming while being stuck in I-95 traffic, Brightline passengers can have a cocktail, beer or wine. Snack and beverage service at your seat will be included in the Select class of tickets. Brightline’s smart service will allow purchases from an attendant.

The MiamiCentral train station near the Miami-Dade Courthouse will have Central Fare, a food hall with 20 different dining options.

MiamiCentral will have integrated connections to Metrorail and the Metromover, plus a platform for Tri-Rail commuter trains. By the end of the year, some Tri-Rail trains will have downtown Miami as their final southern destinations while others will continue to use the station at Miami International Airport.

“We paid very careful attention to the specific locations for the stations so they could, in fact, become the hubs of intermodal connectivity for transportation systems,” Reininger says. “The major objective is to create an alternative to using your private automobile on overcrowded roads. In order for us to get you to change your behavior, we need to be part of an integrated system.”

The Fort Lauderdale station is next to the downtown bus station for Broward County Transit and will have a stop for The Wave Streetcar when it becomes operational. The downtown Trolley in West Palm Beach and Palm Tran buses will connect with the station there.

All three Brightline stations are also being designed with expectations that Tri-Rail ultimately will have commuter trains on the Florida East Coast Railway as well. Tri-Rail’s Coastal Link identifies locations for stations in all the coastal cities in South Florida. Jack Stephens, executive director of the South Florida Regional Transportation Authority, which operates Tri-Rail on the tracks along I-95, is looking to partner with cities in developing stations on the Coastal Link route, which could run from downtown Miami to Jupiter.

Brightline is unique nationally in being the only entity responsible for both the operation of a transit system and the real estate development around the stations, Reininger says.

The Miami station will have 190,000 square feet of office space in the 2 MiamiCentral Tower and 90,000 square feet in 3 Miami Central. Cisneros, Ernst & Young, Moss and Regus are among the tenants that have signed up. Florida East Coast Industries, the parent of Brightline, will move its headquarters from Coral Gables to downtown Miami.

MiamiCentral will have more than 800 residential units, and a 275-unit apartment building is planned next to the West Palm Beach station.

The $195 million, 2.8-mile first phase of the Wave will run from Flagler Village just north of downtown to the Broward Medical Center area near 17th Street.

The project is fully funded and the design-build team will be selected in August, says Laila Haddad, the consultant spokesperson hired for the project.

Some construction activities, such as relocation of utilities, might start towards the end of 2017, Haddad says.

Construction will start in earnest in 2018 and be completed by the third quarter of 2020. After testing and safety certification, the Wave is anticipated to open in early 2021.

The Florida Department of Transportation is managing the procurement stage of the project, but the streetcar will be operated by the Broward County Transit Authority.

Funding for the system has come from an array of federal, state and local sources, including an assessment on properties along the route. The assessment started in 2013 and will continue for 25 years.

One rationale for property owners to pay the assessment is higher property values. For example, a study in Portland estimated real estate values along the route have increased by $11.63 billion. The study estimated that the streetcar was responsible for 35 percent of the 7.7-million square feet of commercial development along its routes.

“We feel the advent of Brightline and the Wave coming to Broward is just the beginning of regional transit in the area,” Haddad says. “This is big for moving people and alleviating congestion as well as important for the economic development of the city.” ↵