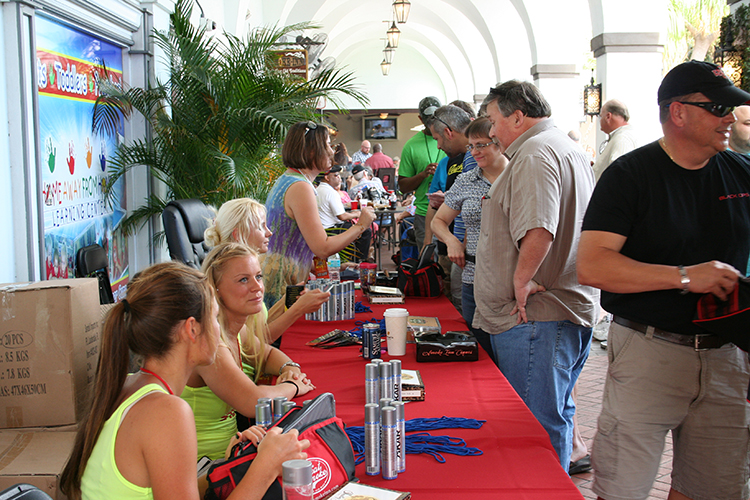 Cigar nirvana will arrive in South Florida in the form of The Great Smoke on Feb. 21.

The event organized by Abe Dababneh, owner of Smoke Inn, is expected to attract more than 1,500 cigar enthusiasts. One of the major allures of the event is getting 45 premium cigars worth about $6.75 each (over $300 total) for the $135 price of admission.

But there’s way more than that.

Representatives of 45 different brands, including industry celebrities, will be on hand to talk about their smokes and typically offer 25 percent discounts and add-ons such as ash trays, humidors and gift sets, Dababneh says. “If you are a cigar buyer, this is the day you want to come and buy cigars.”

The tickets also include a commemorative bag, food from local caterers, beer and wine tastings, plus an assortment of spirits. Russian Standard Vodka will sponsor a special VIP Vodka Lounge and Property Transfer Services will have a great relaxation station where attendees can stop for a quick massage.

Dababneh’s weekly radio show, Kiss My Ash Radio, will kick off things with a live broadcast from 10 a.m. to noon while the classic rock band Foghat will provide entertainment at the end.

Dababneh has moved the ninth annual event from Smoke Inn’s West Palm Beach location to the German American Club in Lake Worth, which will allow easy parking and the addition of vendors that sell cigar related merchandise.

Dababneh started contemplating the creation of The Great Smoke in November 2006, after the 10th anniversary party for his West Palm Beach store. Smoke Inn had three locations then, but now has 12 locations including licensees.

A puff of an idea

He was partially inspired by a cigar industry attendee who raved about the anniversary event at an after party. The next day Dababneh was walking around the store’s courtyard just after noon when inspiration stuck.

“It dawned on me because someone had mentioned a long time ago that Cigar Aficionado threw a Big Smoke,” he says.

There used to be about a dozen such events, including one in Miami, but they had started dwindling because of smoking regulations. Now, the Big Smoke is down to just Las Vegas.

“People around the country who liked this type of event couldn’t go anymore unless they went on a plane to Vegas. So I said to myself, “Wouldn’t it be great to do a Great Smoke right here in our courtyard,” Dababneh says.

He initially planned it a year later, but started worrying that a major cigar seller on Florida’s West Coast might do one, so he accelerated the schedule to February.

He rounded up 30 vendors, but became worried when all it did was rain the week before the event and he had no way of covering the courtyard. The morning of the Saturday event, Dababneh thought he might have to refund 350 tickets.

“About 10 o’clock it was like the sun parted the sky. The next thing I know the CAO girls were walking around in bikinis,” Dababneh happily recalls.

The event has expanded over the year to include a 15,000-square-foot tent with a stage for entertainment. One of Dababneh’s techniques was to snag competitors from America’s Got Talent, including the Scott Brothers and Kristef Brothers. He added a $30 companion fare so cigar aficionados could bring spouses and friends who don’t smoke, but can enjoy the food, drinks and atmosphere.

Dababneh also has a giveaway contest that involves seeing whether the final contestants will take the sure thing of a cash buyout, such as $1,500 each, or gamble on winning a major prize such as a new Camaro. This year there’s the return of a 20 pound bar of silver and Dababneh says he wants to lower the cash offers enough to make sure someone gets it this year.

Dababneh further adds that The Great Smoke has become a national event, which prompted him in the fourth year to add an exclusive pre-event VIP dinner and a free admission after party. In 2015, the pre-event dinner, which has a separate charge, will be at Ruth’s Chris Steak House and the post-event party will be at Spearmint Rhino. The dinner at Ruth’s Chris steakhouse, which will be limited to about 70 attendees, will feature Drew Estate’s release of a five-pack sampling of Smoke Inn’s newest Microblend, the “Pope of Greenwich Village.” The blend doesn’t actually go on sale until April. ?

If you are going

To order tickets: thegreatsmoke.com or (888) SMOKES-1