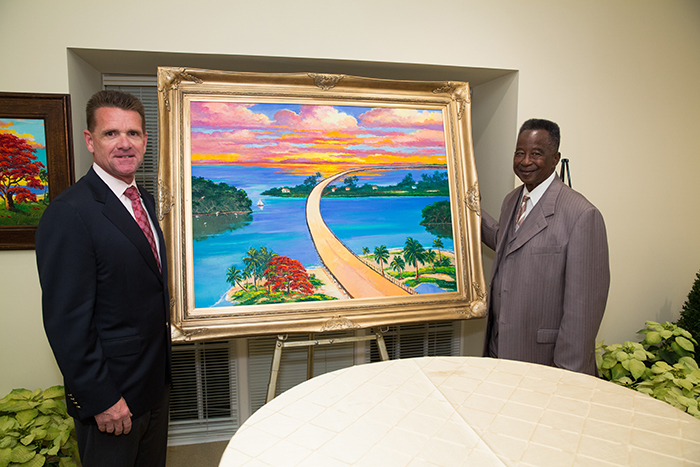 City Furniture says that the cost savings from trucks that can run on compressed natural gas (CNG) are a key part of its strategy to expand to Orlando this year and to Tampa by 2018.

The nation’s 30th-largest furniture retailer has spent $4.5 million to create its green delivery fleet – which can run on CNG or gasoline – and to build a fueling station at its 909,000-square-foot headquarters and warehouse in Tamarac.

The company has recouped its investment in less than two years through fuel savings, says City Furniture President Keith Koenig, who was the subject of SFBW’s CEO Connect in October 2015. Koenig says he is optimistic about the Florida economy and that City Furniture is also planning two new Miami-Dade County stores for 2017.

“We’ve converted the majority of our fleet to bi-fuel trucks that run on CNG or gas, and we covered about 3 million miles this year using CNG,” says the company’s vice president of operations, Andrew Koenig, who spearheaded the fleet conversion. “With just half the emissions, those CNG miles ran far cleaner, and at 60 percent lower fuel cost, than gasoline.” The number of CNG filling stations in Florida has hit 21, so other retailers may also want to consider a switch, he says.

A map on floridagas.org in January showed three public and 12 private CNG fueling stations in South Florida. The website floridagoldcoastcleancities.com has more resources for businesses that are interested in exploring CNG.

City Furniture’s pioneering approach won the company a No. 14 ranking in the national Green Fleet Awards in 2015. It was one of just two private companies on the list.

Tapping into the e-commerce wave

The event will bring together hundreds of business professionals ranging from manufacturers to wholesalers, distributors and retailers, including those currently selling e-commerce and those considering selling e-commerce.

“We are extremely excited to host the eCommerce Expo South Florida event this year,” says Seth Rand, founder and CEO of Rand Internet Marketing. “We look forward to discussing a variety of e-commerce topics, along with making new business relationships and learning more about the latest technologies that e-commerce clients can benefit from.”

Registration for the event at https://goo.gl/UeUz48 is free, but attendees must own, operate or work for a manufacturer, distributor, wholesaler or retailer or already own or manage an e-commerce website. Attendees can also be looking to engage an advertising agency for responsive website design, Web development, search engine optimization (SEO), social media marketing, Google AdWords management, online content marketing or Web hosting services.

A symbol for 90-year-old Gunster: ‘Clear Skies Ahead’

Gunster commemorated its 90th anniversary at its Palm Beach office’s holiday celebration in December. Over the years, the firm has grown to more than 170 attorneys in 18 practice and industry groups at 12 offices.

James Gibson, one of the original Florida Highwaymen painters, unveiled a commemorative piece entitled “Clear Skies Ahead” at the celebration. The Highwaymen, whose name came from selling paintings out of the trunks of their cars, were a small group of African American painters that emerged from Fort Pierce in the late 1950s. They are known for their colorful paintings of Florida scenery. ↵