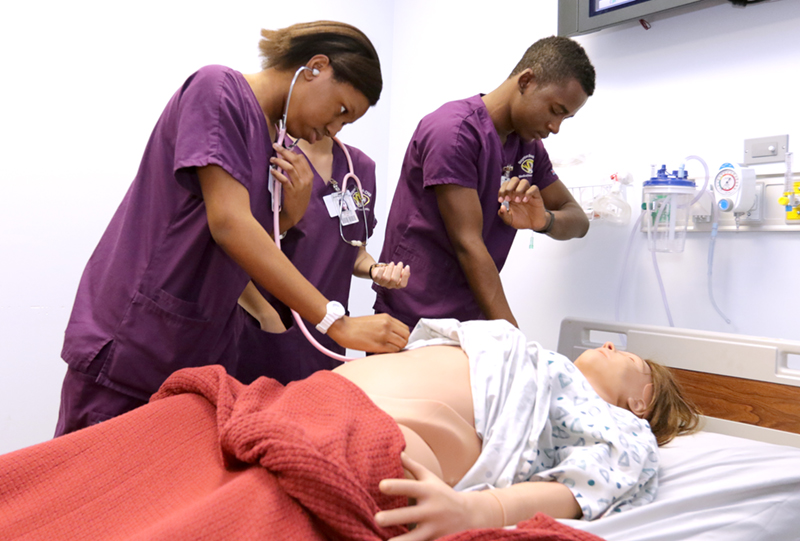 Florida Atlantic University’s medical and health care students soon will have even more modern, state-of-the-art learning tools with which to hone their skills, thanks to a $300,000 grant from the Quantum Foundation to the school’s new Advanced Clinical Skills Training Facility.

The grant was designed to advance the ability of medical students, nursing students, residents and other health care trainees to deliver high quality, technologically advanced, humanistic and culturally competent care to the community. Construction on the new training facility was slated to be completed in May. The facility is being built adjacent to the FAU Simulation Center, which has also received Quantum Foundation funding in the past.

The Quantum Foundation was founded in 1960 in order to provide funding for various health projects in Palm Beach County, says Kerry Jamieson, Quantum’s senior director of communications. “Only nonprofits are funded,” she says. “Our mission is to improve the health of Palm Beach County residents.”

Because of South Florida’s growing—and aging—population, Jamieson says the region could be facing a physical shortage of health care professionals in the future. “We fund educational projects from elementary school all the way through the college level,” she says.

The grant money will provide FAU with various types of advanced, high-tech learning equipment. “They have a facility there that replicates a hospital room,” Jamieson says. “Students work in that ‘state-of-the-art’ hands-on training facility. It’s a lot more realistic than a textbook.”

Mark Goldstein, senior director of the Simulation Center at FAU’s Charles Schmidt College of Medicine, says the grant money is going to help fund the construction of additional space adjacent to the original 7,800-square-foot simulation center. “We are now adding 6,700 to 6,800 square feet,” he says.

The additional space is well needed.

“We are now at 256 students,” Goldstein says. “We had well outgrown our space. We needed to expand our training space and add more technology. Rooms at the new building will be twice the size. We’ve added a new multipurpose room. It’s all related to being able to advance training and add technology.”

“We wanted to expand,” Goldstein says. “Our space was limited, therefore the amount of training was limited.”

The simulation center is no stranger to Quantum funding. “My relationship with Quantum goes back 12 years,” Goldstein says. “We’re very indebted to Quantum for their support. They’ve always been a big supporter since 2004.”

Goldstein says there are two simulation centers in Palm Beach County; the one at FAU’s Boca Raton campus; the second at St. Mary’s Hospital in West Palm Beach. “We’ve trained residents from JFK and the University of Miami, and more than 3,000 practicing nurses,” he says.

A visit to the simulation center features—among many other lifelike educational tools—a number of high-fidelity mannequins. Thanks to the Quantum grant money, an additional four rooms at the new training facility will have mannequins as well. “We bought two with Quantum grant money,” Goldstein says.

The four new additional rooms will be set up like patient exam rooms, Goldstein says. “The goal of the program is to emphasize the teaching of good clinical skills, critical thinking and using the whole technology package,” he says. “These kids are really tech-savvy. They would much prefer active learning. The clinical skills training center will enhance technology and provide a better learning experience.”

FAU medical student Michael Migita, who is entering his fourth year at the medical college, has used the simulation center multiple times. “I’ve used it since my first year. It’s part of the curriculum. As a med student, it’s a great way to learn to communicate with patients. It would definitely help in an emergency situation. It helped our learning process, to communicate and to take a patient’s history,” he says.

The mannequins are not only programmed to communicate, but also allow students to listen to lung, heart and abdominal sounds as they would on an actual patient when assessing for any abnormalities.

Third-year medical student Nicolas Heft also finds the mannequins to be an exceptional learning tool. “We use mannequins and the staff controlling them as live patients,” he says.

Heft, an emergency medical technician who works at a hospital emergency room while going to school, says says the mannequins are on a hospital bed and can be programmed to produce any sound. “They will purposely put in pathology like abnormal heart, lung and abdominal sounds,” he says.

He finds examining the mannequins realistic compared with what he sees in the ER. “We face similar situations all the time,” Heft says. ♦