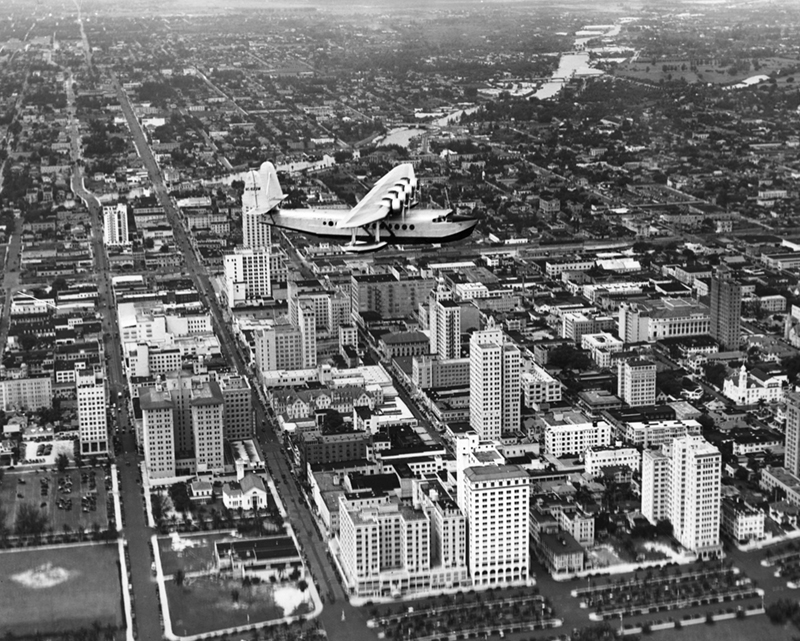 It all began with a big idea from businessman E.S. Peets in 1910: Why not host a flying exhibition in Miami? Most Miamians had never seen an “aeroplane,” much less seen one fly. Air meets were being staged elsewhere, including Tampa and Havana, so Peets sold the idea to Miami’s Board of Trade, which contacted the Curtiss Exhibition Company.

Both tried, but failed, to find the right spot for flying and charging admission. Months later, the idea took off again when Everest G. Sewell, Merchants Association president and future mayor, persuaded local businessmen to finance the event. Soon, a contract was signed with the Wright Brothers to send an aviator and an “aeroplane” for Miami’s 15th anniversary celebrations, July 20-22, 1911.

The event was free, but you could buy a bleacher seat for 25 cents. During the exhibition, aviator Howard Gill climbed into his “aeroplane”—a cloth-winged biplane with a 35-horsepower engine—and flew up over the Miami Golf Links twice. Gill even took Sewell for a ride. Some weren’t sure Sewell would make it back in one piece, but he did, and the flying bug had bitten him. As far as he was concerned, aviation had a future in Miami.

A century later, millions of people and dozens of air sites past and present in Miami can attest to it.

Leading city and aviation officials worked to promote Miami’s prospects as an aviation center, and, in 1927, an innovative man with a small wood-and-fabric plane and a dirt runway in Key West opened an airline. That man was Juan Trippe, and his airline soon became Pan-American World Airways.

During the 1930s, Pan-Am’s previous acquisition of a seaplane airline exemplified the foresight and vision of Trippe, who carried his fledging carrier to new heights. These flying boats opened the door to the small Miami airline, flying to parts of Latin America and the Caribbean and expanding the company’s scope. The “clipper” planes that made Pan-Am so distinctive flew out of Miami’s International Pan American Airport, the current site of Miami City Hall.

Miami’s wild ride to the top as an international hotspot is an intriguing one. HistoryMiami Museum and the Miami International Airport have partnered to tell the 100-year story of flight in the Magic City with an exhibition, “The Century of Flight,” in concourse J of the south terminal, in the new Hall of Aviation.↵