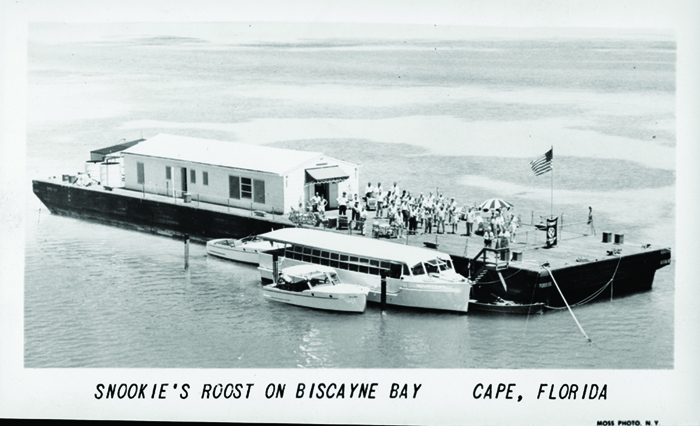 Just south of Key Biscayne’s tip, there’s a group of houses precariously perched on stilts dug into the sand banks of Biscayne Bay. As early as the 1920s, long before bright lights lined Ocean Avenue, the stilt shacks served as the premier entertainment venue of the Southeast.

Places such as Crawfish Eddie’s, established shortly after the Prohibition era, sold bait, beer and a signature crawfish dish. As the demand for more entertainment grew, more and more of those little stilt houses sprouted up, creating a history all their own.

The Calvert Club sprung up in the late 1930s and was the first social club to call the crystal blue waters of Stiltsville home. Members of the elite Miami Beach Rod and Reel Club flocked there because it offered seclusion for a group that really knew how to party.

As Miami’s population skyrocketed, so did an expanding need for exclusive social groups. In 1940, Commodore Edward Turner saw an opportunity and seized it. Turner built a massive house near the well-established Crawfish Eddie’s and named it the Quarterdeck Club. During its commencement, membership was invitation-only and cost $150. Word got out and the Quarterdeck’s popularity blossomed; it even appeared in a Feb. 10, 1941, Life magazine article that described it as an “extraordinary American community dedicated solely to sunlight, salt water and the well-being of the human spirit.”

Stiltsville’s allure of mischievous fun was washed away by hurricanes in the 1960s. Hurricanes Donna and Betsy together took out more than half of the 27 houses built off the coast of Biscayne Bay.

Hurricane Andrew, a storm of historic proportions, swept through Stiltsville in 1992, and left only seven houses standing. The dated buildings were on their last legs and were in dire need of repair. South Floridians recognized the community as a part of Florida history that ought to be salvaged, and many efforts were made to preserve the little town on the water. However, it wasn’t until August 2000, with the help of 75,000 signatures, that Stiltsville officially was recognized as part of Biscayne National Park.

Since then, the Stiltsville Trust was created, raising funds to repair and rehabilitate the homes to showcase the vibrant part of Florida history that they represent. To ensure that hurricanes do not further beat down the area, the seven remaining homes have hurricane strapping added into the structures to protect against hurricane force winds.

Tours of this iconic city are offered twice a month through the HistoryMiami Museum. Acclaimed historian Paul George serves as the narrator and tour guide for day cruises through Stiltsville, sharing interesting anecdotes while letting patrons soak up the sun and fall in love with the crystal blue waters.

Information for this feature is courtesy of the HistoryMiami Archives & Research Center, which is open to the public and contains more than 1.5 million images of southeast Florida, the entire state and the Caribbean from 1883 to the present. For information or to visit HistoryMiami, visit historymiami.org.↵

Information for this feature is courtesy of the HistoryMiami Archives & Research Center, which is open to the public and contains more than 1.5 million images of southeast Florida, the entire state and the Caribbean from 1883 to the present. For more information, visit historymiami.org.