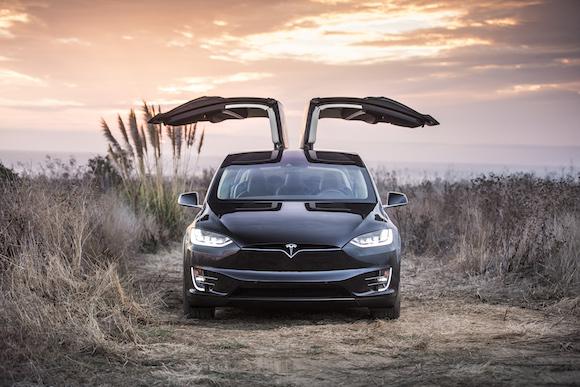 The electric-car maker could dominate the market for the foreseeable future.

It’s easy to get caught up in Tesla Motors’ (NASDAQ:TSLA) sleek car designs, its superior electric power at the wheels, its semi-autonomous Autopilot system, and its David-vs.-Goliath persona in the automotive industry.

But in addition to Tesla’s allure, there are a few key areas that give the electric automaker a serious advantage over its competition.

Let’s look at three charts that show why Tesla is the premier electric-car maker of today, and likely into the future.

Electric vehicles are poised for massive growth
Between 2015 and 2024, sales of electric vehicles will jump from just 2.4 million to 6 million. But that’s only just the beginning. By 2040, EV sales will account for 35% of all light-vehicle sales that year, and up from just 1% right now.

Here’s what that growth will look like over the next 24 years, according to Bloomberg: 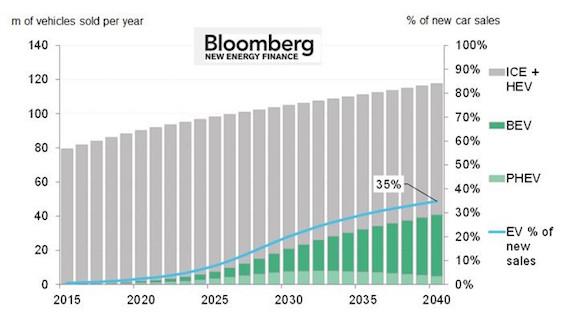 Yes, a 24-year outlook is a tad long, I get it. But look at the green bars toward the left side of that chart; that’s where EV sales are right now (you can hardly see them!). So, why are barely recognizable worldwide EV sales advantageous for Tesla? Because at the end of the chart, you can clearly see how electric vehicles are expected to become a major part of worldwide sales. It’s evidence that Tesla is betting on a winning future, and it already has a sizable lead.

Tesla is currently on its third production electric vehicle (the Model X) and will start production of its fourth (the Model 3) next year. While many other automakers are still trying to decide whether or not electric cars are more than a niche market, Tesla seemed to take a peek at the future, and then created four cars based on what it saw. 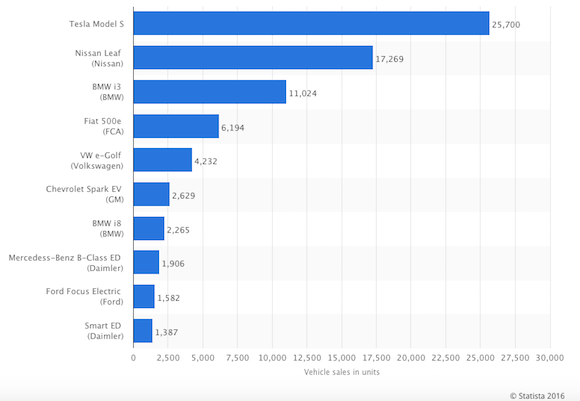 Now, we all know that past performance isn’t always a predictor of future success, of course. But consider that this year, Tesla will not only be selling its Model S, but also its Model X SUV. If the company already dominates sales of EVs with just one car, then it’s not hard to image two very popular all-electric vehicles will likely add to its already-strong sales (compared to those of other EVs).

Then, add to that that late next year, the Model 3 will officially start production. That means Tesla will have three EV models for sale by late next year. Meanwhile, one of Tesla’s closest competitors, BMW, is facing a mass exodus of its core talent to a Chinese electric-car start-up funded by Tencent Holdings.

With competitors struggling to stay in the electric-vehicle game, and Tesla expanding its product line, it’s clear the company is poised to continue its lead.

Tesla’s Gigafactory will make the company even more competitive
Many Tesla investors have likely seen the graph below, but that doesn’t make it any less important to dive into. Tesla’s in the middle of building its massive $5 billion Gigafactory out in the Nevada desert and expects it to be at full battery-producing capacity by 2020.

Here’s what the Gigafactory’s battery prodcution will look like over the next few years, according to Tesla:

Less than four years from now, Tesla will be making more cell batteries than all of the batteries current producers manufactured in 2013. The advantage here lies in Tesla being able to produce massive amounts of batteries for of its vehicles, and thus bring its operating costs down.

The company says it’ll be making 500,000 vehicles by that point, and it’ll need a lot of batteries to put in them. Keep in mind that Tesla manufactured just over 50,000 vehicles in 2015.

No other carmaker has built, or is building, a battery factory of the Gigafactory’s scale. The cost reduction for the batteries (one of the most expensive parts of an EV) is allowing Tesla’s Model 3 to become a reality — and to drive further, with more power, and at a cheaper price tag than its competitors.

Foolish thoughts
Tesla will likely hit a few snags along the way — it’s already running into a few problems with early versions of the Model X — but the above advantages aren’t going away any time soon. The company is already outpacing its electric-car competitors right now, and it appears its lead could continue to widen as time goes on.

10 stocks we like better than Tesla
When investing geniuses David and Tom Gardner have a stock tip, it can pay to listen. After all, the newsletter they have run for over a decade, the Motley Fool Stock Advisor, has tripled the market.*

*Stock Advisor returns as of April 8th, 2016.
The author(s) may have a position in any stocks mentioned. The Motley Fool owns and recommends shares of Tesla.