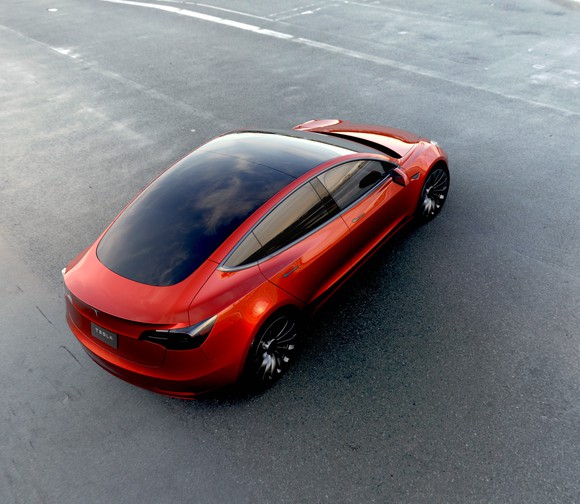 The 3 Best Auto Stocks for Your Portfolio

There are some great buy-and-hold opportunities among automotive stocks for patient investors right now. Our contributors especially like these three.

Many automotive stocks have had a tough time in 2016. That’s not necessarily because the companies are in trouble, or badly run. It’s because some investors are eyeing the U.S. new-vehicle market and concluding that it’s probably past its cyclical peak.

That’s a legitimate short-term worry, but it’s one that creates opportunities for investors with a longer-term horizon. Buying well-run companies with strong bottom-line growth possibilities, disruptive opportunities, or a fat dividend — or all of the above — is always a good idea, all the more so when some of them are cheap.

So, what are the three best automotive stocks for your portfolio? Right now, our contributors like Swedish auto-safety technology supplier Autoliv, Inc. (NYSE:ALV), electric-car and energy powerhouse Tesla Motors (NASDAQ:TSLA), and — for a surprising reason — Detroit icon General Motors (NYSE:GM). Here’s why.

Daniel Miller: Although I’m still bullish on some major automakers thanks to dirt-cheap valuations and record profits, the fact is, new-vehicle sales are peaking in the U.S. market. Because of that, it’s smart for investors to look at other angles of the auto industry for their portfolio. In the famous words of Jim Cramer: “There’s always a bull market somewhere.”

With that theme in mind, one stock that has kept my interest has been Autoliv. Autoliv is a global leader in manufacturing safety components and systems for the automotive industry. Those products include air bags, electronics, and seat belts as well as automated emergency braking, lane correction, and radar sensors, among others.

With recalls continuing to increase in more mature markets, increased safety regulation is likely to follow, which should present Autoliv with a great opportunity to grow its top and bottom lines in the years ahead even if new-vehicle sales slow. As consumers become wealthier in emerging markets, demand for safety content within vehicles should increase. Furthermore, many automakers prefer suppliers that can produce parts on a global basis — just as they do — and Autoliv has production facilities in 25 countries.

One catalyst in the near term is thanks to Takata’s humongous air bag recall, which has affected just about every major automaker on the planet. Autoliv should be positioned to win some of that business at least temporarily, and perhaps long term. Autoliv also benefits from high switching costs, because for a vehicle with a life cycle of five to eight years, sometimes longer, switching between suppliers within that cycle would be expensive and time-consuming.

Ultimately, Autoliv is one of the rare parts suppliers that seem well positioned for increased safety demand and regulations globally, which should make it a valuable automotive stock as the U.S. new-vehicle market plateaus.

The car company that’s about much more than cars

Jason Hall: Now’s an interesting time to be investing in auto stocks, considering that the North American auto market — one of the largest and most important in the world — has given all indications that it has peaked and could be flat to down over the next year or more. And while this is a completely normal part of a healthy auto market, and will ebb and flow from one year to the next, it does make now a somewhat risky time when it comes to near-term stock performance.

With that in mind, I’ll offer up a different — and maybe controversial — suggestion: Tesla Motors. I’ll not deny there’s measurable risk with Tesla, and a lot of today’s share price is based on the potential of what the company aims to be years from now. There’s also the risk that CEO Elon Musk’s plans to combine Tesla Motors and SolarCity don’t work out, and instead of generating positive cash flow, the solar company could turn into a weight on the auto business.

But I believe that Musk is a once-in-a-generation visionary and that Tesla Motors will thrive as both an automaker and an energy company. Frankly, this isn’t an investment to make without accepting that if it goes badly, it could go very badly, and investors could lose a lot of money. But if Musk is able to achieve even a portion of his plans for Tesla Motors, investors could do incredibly well years down the road.

If it’s growth you’re looking for, and you’re willing to stomach the very real risk, Tesla Motors is the best auto stock for your portfolio.

Just below the radar, something very big is happening in Detroit

John Rosevear: It may seem funny to see General Motors on this list. After all, GM was the poster child for everything wrong with Detroit for decades.

But that was then. This GM is a transformed company, with fat profits, a strong dividend, shareholder-friendly management, and industry-leading quality. Not only that, but CEO Mary Barra has GM on a bright course for the future — and out in front of the trends that are expected to reshape the auto industry.

GM IS RAMPING UP PRODUCTION OF THE CHEVROLET BOLT EV, THE FIRST AFFORDABLE LONG-RANGE ELECTRIC CAR. IT’S JUST ONE OF SEVERAL AREAS IN WHICH GM IS SURPRISINGLY OUT IN FRONT OF THE INDUSTRY — AND SILICON VALLEY, TOO. IMAGE SOURCE: GENERAL MOTORS.

That’s true of a few other automakers. Why does GM’s stock look like an especially intriguing buy right now? There are three big reasons. The first is valuation: GM shares are trading at less than four times the company’s trailing-12-month earnings. Even for a 100-plus-year-old automaker, that’s dirt cheap: The historical norm is more like 10 times earnings.

Second, that low price means GM is sporting a terrific dividend yield of about 4.8%. Of course, the auto industry is cyclical, and a fat dividend yield doesn’t mean much if GM will have to cut its dividend during the next downturn. Historically, GM and its Detroit peers have swung to losses during recessions. (That’s one reason GM is cheap now, as the U.S. new-car market appears to be past its peak.)

But that’s one thing that really is different this time: GM has lowered its cost base enough that it should stay profitable at anything above the trough of a deep recession, like we saw in 2009. Its profits will be squeezed, but GM has a $20 billion cash hoard to fund product development and other obligations through the next downturn, whenever it happens. And CFO Chuck Stevens recently said that unless the recession becomes very severe and protracted, paying the dividend will count as one of those “other obligations.”

If it were just about the dividend, you could do a lot worse than buying GM now and reinvesting the dividend payments through the next downturn. But there’s a third reason to consider buying GM now, and this is the one that surprises many investors: Barra has GM on a growth trajectory.

About two years ago, Barra laid out a comprehensive plan to boost GM’s pre-tax profit margin to between 9% and 10%, sustainably, by “early next decade.” The plan is complicated, with several parts, but the takeaway is this: It’s already working, and it will continue to work even if gas prices rise or the economy dips. When Barra announced the plan in October 2014, GM’s margin was 6.1%. Last quarter, it was 8.3%.

Long story short: It’s rare to find a fat, sustainable dividend, a deep-value price, a strong management team, and a credible profit-growth story all in one stock. Take a good, long look at this one.