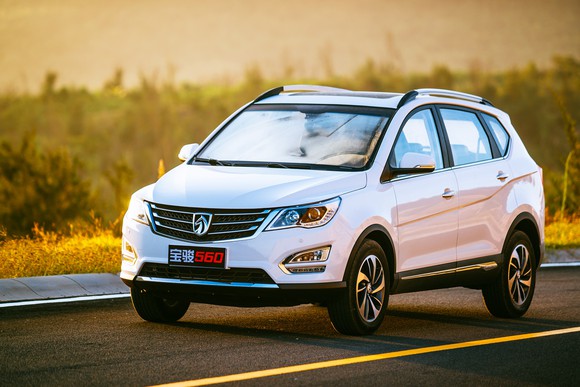 The 3 Best Stocks to Profit From the Rise of China

You don’t have to read Mandarin to find companies well-positioned to profit from China’s ongoing boom. Here are three familiar American names that fit the bill.

Many American investors are intrigued by the investment possibilities offered by China’s ongoing economic rise. But they’re also daunted: There is a bewildering array of up-and-coming Chinese companies to consider, and getting news on many of them (or at least, news in English) can be a big challenge.

But you don’t have to go to China to find companies that are thriving in the booming Chinese market. We asked our Fool contributors to identify three U.S. companies that each have a big presence in China and that are well-positioned to bring home big profits as the Chinese market grows. Here’s what they came up with.

Sprinting for growth in the Middle Kingdom

Steve Symington: It’s hard to find any company with a more attractive runway to bolster its presence in China than Under Armour (NYSE:UA). Last quarter alone, Under Armour’s international revenue grew 68% year over year, to just over $150 million. But international sales still represented only around 15% of Under Armour’s total. And during Under Armour’s subsequent conference call, company founder and CEO Kevin Plank specifically singled out the greater China geography as crucial to implementing Under Armour’s global growth strategy, especially amid what he described as “increasing support for sport by the government.”

Plank also called this quarter an “inflection point for the brand in China” as it begins to ramp its expansion plans in earnest. So far this year, e-commerce revenue from China has already climbed 157%. And when all is said and done in 2016, Under Armour will have opened more than 150 international partner stores this year, with the majority located in China.

“We’re not as famous as we will be [in China],” Plank stated, “but we’re definitely proud, I think, of the inroads that we’ve made, and the big opportunity in putting stores behind it, putting distribution.”

But arguably most important to Under Armour’s success in China is the fact that its consumers largely view UA as a superior performance footwear brand, with many even regularly referring to it as “the professional brand,” according to Plank. To be sure, Under Armour’s men’s and women’s running businesses have each more than doubled from last year. And with the help of two-time NBA MVP (and loyal Under Armour-sponsored athlete) Stephen Curry, the high-end Curry 2 Under Armour basketball shoe has proven the top-selling item in China year to date in 2016. It should come as no surprise, then, that just last week Under Armour took Curry on his second tour of Asia to promote the brand over five days in Shenyang, Guangzhou, Hong Kong, and Taipei.

So with international revenue still representing such a small slice of Under Armour’s total, and with the Middle Kingdom playing a central role in its overseas growth initiatives, I think Under Armour is a perfect stock to profit from the rise of China.

No stranger to China

Tim Green: International Business Machines (NYSE:IBM) has been operating in China for decades, with the first IBM machines installed in the country way back in 1934. IBM China was established in 1936, headquartered in Shanghai, and by 1939 the company counted as customers the Central Bank of China, Bank of China, and various other major organizations. The revolution of 1949 complicated matters, but by 1979 the first IBM computer system was installed in the country.

As China’s economy continues to grow rapidly, IBM is positioned to benefit. One area in particular where IBM could expand its business in China is the market for server CPUs. In an effort to effectively compete against Intel, IBM launched the OpenPOWER foundation in 2013 along with companies like Alphabet’s Google and NVIDIA. The goal was to create an ecosystem around IBM’s Power processors, creating a viable alternative to Intel in the data center.

Part of IBM’s plan is to allow third-party companies to build and sell Power servers, as well as custom Power chips. Allowing Chinese companies to design and build custom Power chips could help IBM make inroads into the Chinese server market, given China’s push to build up its homegrown tech industry. Advanced Micro Devices is following a similar strategy with its recently announced joint venture in the country. China is a tough market for American technology companies, but IBM’s long history and realistic strategy should help the company profit from the country’s continued rise.

This Rust Belt icon is thriving in China

John Rosevear: I think a lot of U.S. investors are dimly aware that Buick is a popular brand in China. But I think a lot of folks miss just how big General Motors’ (NYSE:GM) presence in China has become, how well it’s positioned to ride the country’s growth over the long term — and why, here in 2016, GM is looking like a very good investment.

China has a slew of domestic automakers, and most of the global giants have a presence there. But GM sells more cars and trucks in China than any manufacturer other than Volkswagen — and in some years, GM sells more than VW. Both GM and VW have dominant positions in China. But GM is the better bet for investors for a bunch of reasons.

THE BUICK EXCELLE GT IS ONE OF CHINA’S BEST-SELLING CARS. IT’S A CLOSE COUSIN OF THE U.S.-MARKET BUICK VERANO. BUT GM’S PRESENCE IN CHINA GOES FAR BEYOND BUICK. IMAGE SOURCE: GENERAL MOTORS.

China has become a huge part of GM’s global business: Last year, GM and its Chinese joint ventures sold 3.6 million vehicles in China, more than the 3.1 million GM sold here in the U.S. It’s on track to sell even more in 2016: Through August, GM’s sales in China are up 8% versus the same period last year.

That growth isn’t likely to stall. GM has the production capacity, the dealer network, the product mix, the local partners, and the on-the-ground expertise to continue to be a leader in the Chinese auto market well into the future.

China doesn’t yet contribute as much to GM’s bottom line as its wildly profitable North America operation. That’s mostly due to product mix: The Chinese still buy more small cars and fewer loaded big SUVs than Americans, though they’re buying more SUVs every year. And GM’s upscale (and highly profitable) Cadillac brand is growing quickly in the Middle Kingdom. But China already contributes a lot: GM raked in $2.1 billion in equity income from its Chinese joint ventures last year, more than a fifth of its $9.8 billion in net income for 2015. That proportion will rise as Chinese buyers continue to move upscale.

There are a lot of good reasons aside from China to take a closer look at GM shares right now. Even with all of the radical technological changes expected to come to the auto industry over the next few years, GM’s low valuation (just over four times trailing-12-month earnings) and fat dividend yield (4.7%) make it a very intriguing stock — in part because GM is better-positioned to thrive in that technological upheaval than many realize.

Long story short: China is a major part of GM’s compelling growth story, and it will be for years to come. Take a closer look at this one.

10 stocks we like better than IBM
When investing geniuses David and Tom Gardner have a stock tip, it can pay to listen. After all, the newsletter they have run for over a decade, Motley Fool Stock Advisor, has tripled the market.*

David and Tom just revealed what they believe are the ten best stocks for investors to buy right now… and IBM wasn’t one of them! That’s right — they think these 10 stocks are even better buys.