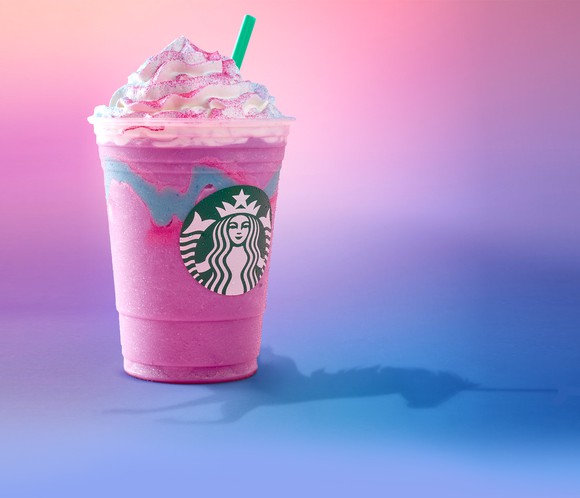 The company has a limited-time hit, but it may also have found a new audience.

Starbucks (NASDAQ:SBUX), with the success of its Unicorn Frappuccino, has become one of a handful of companies that have managed to master the art of capturing public attention. Call it car-crash public relations, or liken it to a person wearing a bright pink tuxedo at a black-tie affair. In any case, the brightly hued, super-sugary drink was simply too bizarre to ignore.

The Unicorn Frappuccino joins products like KFC’s Double Down (the sandwich that used fried chicken as bread), Tacos Bell’s original Doritos Locos Taco, and Pizza Hut’s pizza with a hot-dog-stuffed crust as food spectacles that get people talking.

It’s a formula designed not so much to create good food (though all the items mentioned above have their devoted fans), but to generate attention.

The Unicorn Frappuccino brought Starbucks a stunning amount of free media coverage and turned customers into a social media army that fueled attention for the limited-time offering, driving traffic to stores so people could buy the color-changing, flavor-changing beverage before it sold out.

What does this do for Starbucks?

Obviously the coffee chain got tens of millions of dollars’ worth of free advertising in the form of media coverage and social media shares. But that’s only a small part of the benefit the Unicorn Frappuccino brought to the company.

Perhaps the most important thing the frozen beverage did for Starbucks is let the public know that the company has non-coffee-based offerings. The sheer number of social media pictures with young kids drinking it eventually conveyed that message.

The Unicorn Frappuccino not only brought in lapsed Starbucks customers and increased checks from regulars, but also opened up a new audience for Starbucks. This particular drink is only a limited-time offering, but the chain has creme Frappuccinos (which do not contain coffee) on its regular menu, along with hot chocolates, caffeine-free teas, and other kid-friendly beverages.

The gift that keeps on giving

The various Yum! Brands chains have not only scored with some attention-getting products, but they have also built up expectations. People are waiting to see what they will do next, and that brings both media and social-media attention to their newest stunts.

Starbucks may not be able to top the success — or the sheer absurdity — of the Unicorn Frappuccino, but more people will be looking for new menu items going forward. Starbucks, thanks in part to customer-created “secret menu” items, has a deep bench of unique, non-coffee-based drinks it could cycle onto its menu as a way to build upon the too-young-for-caffeine audience whose attention it now commands.

The American public has shown a willingness to fall for train-wreck marketing. It’s why we watch Dancing with the Stars, and why many of us can’t look away from whatever the Kardashian sisters might be doing. Combine two seemingly mismatched foods or create an over-the-top edible (or drinkable) spectacle, and people will come.

Starbucks has captured the public’s attention with the Unicorn Frappuccino, and it should be able to hold on to it with its next “stunt” drink. That should grow the chain’s audience and give it an easy way to bump sales during slow periods — by simply bringing the fanciful beverage back.

10 stocks we like better than Starbucks
When investing geniuses David and Tom Gardner have a stock tip, it can pay to listen. After all, the newsletter they have run for over a decade, Motley Fool Stock Advisor, has tripled the market.*