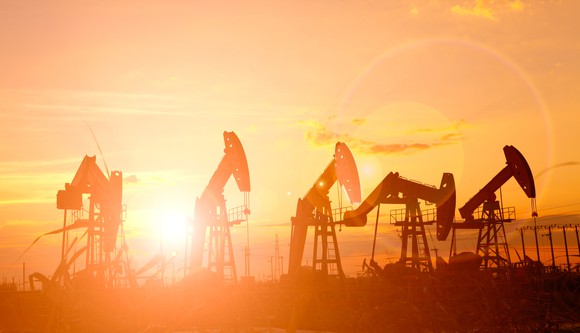 A new report shows that the U.S. has more recoverable oil than Saudi Arabia.

According to a new report by energy consultancy Rystad Energy, the U.S. is sitting on more recoverable oil than any other nation in the world. Rystad estimates that the U.S. could recover 264 billion barrels of oil, which, for perspective, is enough to get America off foreign oil imports for the next 30 years. That figure represents more oil than the estimated 256 billion barrels located beneath the frozen tundra of Russia and the projected 212 billion barrels lying underneath the desert sands of Saudi Arabia.

Drilling down into the report

Rystad based its report on the analysis of more than 60,000 oil fields, which it conducted over a three-year period. Overall, it estimates that total recoverable global oil reserves stand at 2.1 trillion barrels of oil, which at the current production rate of 30 billion barrels annually, is enough to last 70 years. That said, this number includes reserves that are technologically and economically viable to produce and not the estimate of the total of the world’s potential resources, which are projected to be much larger.

For the U.S., Rystad’s report shows the remarkable impact of shale, with roughly half of the country’s recoverable oil coming from these unconventional plays. While the oil has always been there, what’s new are the tools to unlock the oil trapped in these tight rock formations. The initial keys to unlocking this oil were the combination of hydraulic fracturing and horizontal drilling. However, recent innovations such as 3D seismic, geosteering, and enhanced completions are increasing the amount of oil that producers can recover from these tight rocks, which is the game changer that has rocked the oil market to its core in recent years.

Rystad’s report shows just how far the U.S. oil industry has come in a few short years. However, the industry is still scratching the surface of its potential. Oil producers are fine-tuning and continuing to improve their process.

Independent driller Newfield Exploration(NYSE:NFX), for example, recently discovered the STACK play in Oklahoma. However, while its initial drilling results were good, they’ve become even better over the past few years. Driving these gains are various tweaks the company made to its drilling process, which included drilling wells closer together and targeting specific rock zones that the data shows are rich in hydrocarbons. Newfield is also drilling longer wells, spacing fracks closer together, and using more sand per well. The results have been breathtaking. Newfield now recovers more oil per well, at a lower cost than ever before, driving exceptional drilling returns at current oil prices.

Global exploration and production giant Apache (NYSE:APA), likewise, spent the past few years testing and tweaking its shale drilling process. This year, for example, the company’s primary investment is in the strategic testing of its acreage to discover the best way to optimize its recoveries and returns. This investment is in addition to driving down its costs through efficiency gains, with the company’s well costs down 45% over the past year. While about half of that drop is because of cost deflation as a result of the market downturn, the other half is structural due to well design changes and faster drilling rigs making these cost savings permanent in nature. These structural changes will vastly improve Apache’s drilling returns as oil prices improve.

Because of these innovations, shale went from being one of the highest-cost supplies to being among the most economically competitive in the world. According to analysts at energy researcher PIRA, U.S. tight oil’s supply costs average between $45 to $65 a barrel, which at the low end is on par with conventional supplies from Nigeria and Venezuela. Furthermore, some wells are economic at as little as $30 a barrel, which is on par with Russia and the Middle East.

As analysts dig into the data, it is becoming clear that the U.S. is sitting on a vast supply of recoverable oil. This number could continue rise as producers discover the best ways to get the most oil out of these tight rock formations. These future advancements could drive down the cost of production even further. This assessment suggests that the best days for America’s energy industry still lie ahead.

Matt DiLallo has no position in any stocks mentioned. The Motley Fool has no position in any of the stocks mentioned. Try any of our Foolish newsletter services free for 30 days. We Fools may not all hold the same opinions, but we all believe that considering a diverse range of insights makes us better investors. The Motley Fool has a disclosure policy.