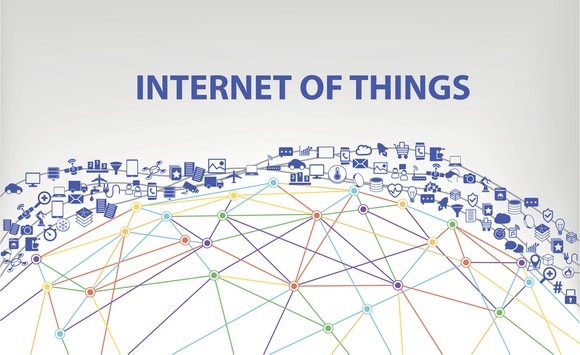 Why 2017 Is the Year to Invest in IoT Stocks

There’s been a lot of talk about the Internet of Things lately, but many tech companies are now making strategic moves in the space — and creating big IoT opportunities for 2017.

Investors have likely heard a lot about the Internet of Things (IoT). The term refers to the connection of formerly unconnected things to the Internet, so that they can collect data or automate processes. A smartwatch is an IoT device, and so is an Internet-connected tractor that knows how many seeds have been planted, and where.

The IoT’s broad applications have made it a favorite among some investors, and there are plenty of companies to choose from in the space. But is now a good time to invest?

To help answer that question, let’s take a look at a few key developments happening in the IoT space right now.

Telecoms are making the IoT a priority

Japanese telecom giant SoftBank (NASDAQOTH:SFTBF) recently purchased the British chipmaker ARM Holdings for nearly $32 billion, mostly based on ARM’s position in the IoT. SoftBank’s billionaire CEO, Masayoshi Son, had this to say about the importance of IoT in the acquisition:

“First there was the internet, then the mobile internet and next there will be the internet of things, which is going to be the biggest paradigm shift in human history. I’m making this investment at the very beginning of this shift.”

SoftBank’s purchase of ARM was the company’s largest acquisition, the biggest Japanese acquisition in Europe, and one of the largest acquisitions of 2016. The company is betting that ARM’s IoT chip designs will be just as popular as ARM’s tech has been in smartphones. But SoftBank isn’t the only telecom betting on the IoT.

Verizon Communications (NYSE:VZ) is already making inroads in the IoT space in the U.S. with its Hum automotive telematics service and its upcoming 5G network. The former allows drivers to add an internet-enabled device to their car’s onboard diagnostics connection and pair it with an app that tracks how fast the car is going, monitors if it leaves a specified boundary, and provides maintenance reminders.

But the real opportunity is in Verizon bringing an IoT-specific network online, to allow the billions future IoT devices to come online.

Verizon’s vice president of technology planning, Adam Koeppe, said in an interview earlier in 2016 that the “IoT will be about tens of billions of devices connected to the network. When you think of truly connected societies — traffic lights, stop signs, parking meters and everything within a city connected and interacting with itself — that’s where 5G comes into play.”

The company says that 5G will be the “foundation for creating more internet-connected devices” and will bring part of the 5G network online sometime in 2017, with more expansion after that.

Companies have been building out IoT platforms for developers for a few years now, but the number of platforms is increasing and their capabilities are expanding.

Take Amazon.com (NASDAQ:AMZN) for example. Its Amazon Web Services (AWS) has been around for a while now, but the company is continually releasing new IoT platforms that help developers connect to it.

Amazon’s latest IoT platform, called Greengrass, debuted earlier this month and allows developers to set a single hub device to receive data from multiple low-energy devices and transmit the data to the cloud for those devices. All of this allows small IoT devices to conserve energy yet still collect data to be analyzed.

That’s just one small part of Amazon’s broad-based IoT focus, but it’s another example of the company building IoT platforms that tie directly into its AWS. That’s good news for the company as it expands its AWS revenue, which was $3.2 billion in the third quarter.

Amazon isn’t the only one going down this path, of course. Alphabet’s (NASDAQ:GOOG)(NASDAQ:GOOGL) Google has built out several iterations of IoT platforms, and just released its newest one, called Android Things. This version allows developers to build on Android APIs and connect with the company’s new Google Assistant.

Google has already released several different IoT plaforms (Android@Home and Brillo), but Android Things is already starting to gain traction, with Belkin, WeMo, and Honeywell already signing up. The benefit for Google is the same as with Amazon’s IoT platform: If Google can get more developers to use its protocol when building IoT applications, then it might be able to host those devices on its cloud services as well.

Mobile giants are pivoting to IoT

Qualcomm’s (NASDAQ:QCOM) strong position in the mobile space is undeniable, but as sales of smartphones slow down, even this mobile juggernaut is looking to the IoT for new opportunities.

The company made a $37 billion bid for chipmaker NXP Semiconductors (NASDAQ:NXPI) in October and expects the purchase to boost its IoT prospects. Qualcomm CEO Steve Mollenkopf commented on the acquisition’s potential during a conference call:

“Our priority growth segments, IoT, automotive and networking, are being transformed by mobile technologies. Our proposed acquisition of NXP and our 5G leadership further accelerates our positions in these segments.”

Qualcomm will use the NXP purchase to enter the growing semi-autonomous car market, while benefiting from NXP’s IoT position in the near-field communication and radio-frequency identification spaces as well.

Qualcomm says that after the deal closes on NXP, the company will earn about 30% of its total revenue from the Internet of Things and automotive segments, up from about 8% right now.

Nearly all of the companies I’ve listed above just made big IoT moves within the past few months. Some have been making big strides in the IoT space before that, but the acquisitions, platforms, and networks they’re building are further proof that the IoT will continue being built out in 2017. As SoftBank’s Son said, he’s making his investment in IoT “at the very beginning of this shift” — which means there’s still plenty of time for investors to benefit as well.

Suzanne Frey, an executive at Alphabet, is a member of The Motley Fool’s board of directors. Chris Neiger has no position in any stocks mentioned. The Motley Fool owns shares of and recommends Alphabet (A and C shares), Amazon.com, and Qualcomm. The Motley Fool recommends NXP Semiconductors and Verizon Communications. Try any of our Foolish newsletter services free for 30 days. We Fools may not all hold the same opinions, but we all believe that considering a diverse range of insights makes us better investors. The Motley Fool has a disclosure policy.