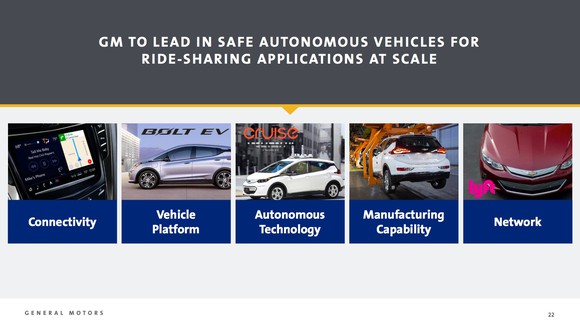 The Chevy Bolt shows that GM’s technology claims should be taken very seriously.

Some, but not all. One century-old Rust Belt giant is increasingly confident that it will be among the winners as self-driving technology goes mainstream — and if you’ve followed General Motors (NYSE:GM) under CEO Mary Barra, you know that when GM talks about technology, it’s worth paying close attention.

Why GM thinks it will be a self-driving leader

Earlier this month, GM President Dan Ammann explained why the General’s management team thinks GM is well-positioned to lead in the coming era of self-driving vehicles: “We have been very consistent, I think, in our external messaging on autonomous vehicles and ride-sharing and what we see the opportunity to be. We think this could be a very, very large, addressable market, in autonomous and ride-sharing at scale, and we believe that we have assembled all of the pieces that we need to lead in this area.”

This slide from Ammann’s presentation shows those “pieces” as GM sees them.

Most tech-oriented investors probably don’t think of GM as a leader when it comes to vehicle connectivity. But most of us have seen those OnStar buttons that GM has been installing in its vehicles for 20 years now. Put two and two together: GM has taken the OnStar technology and connectivity platform — and the lessons it has learned over the last two decades — and is transforming it into a comprehensive platform for the connected vehicles of the not-very-distant future.

As for GM’s vehicle platform, the photo says it all. Ammann:

We believe we have the right vehicle platform for AV. We think the only long-term sustainable path for autonomous vehicles is fully electric. And we’re obviously in a leadership position with the Bolt. All of our AV development that’s going on is based on the Bolt platform.

The all-electric Bolt is already in mass production at GM’s factory in Orion, Michigan. That factory has plenty of capacity to ramp up, if and when demand for the little electric crossover increases. “Manufacturing capability” is a big challenge for new industry entrants, but it obviously isn’t going to be an issue for an auto-manufacturing giant like GM.

As for network, that was a key to GM’s investment in ride-hailing start-up Lyft, as Ammann explained: “And then on the network, we have our alliance with Lyft, that’s one year old now. And we think it’s been very successful in terms of both the short-term opportunities we’ve been pursuing in relation to Express Drive, but also, obviously, the ultimate goal here of deploying autonomous vehicles into a shared network.”

But does GM really have its own self-driving technology? How can an old Detroit company keep up with Silicon Valley? Part of the answer is that GM bought a San Francisco-based self-driving start-up, Cruise Automation, last year. Here’s the rest, per Ammann:

So any time any of us from the leadership team are out on the west coast, we stop by to see the Cruise team and typically, we’ll take a ride and join one of the development rides in the cars and see how the technology is evolving. And what I’m going to show you is a video of a ride that I went on.

Amman explained that this video is from a “regular development ride,” not a special ride done just for the video. It’s sped up, but it includes all 22 minutes of the ride that Ammann took, in the back seat of this vehicle as the video was filming.

“So there you go. It’s real,” he said. “From a technology point of view, we think a ton of progress has been made. There’s still a lot of work to do, safety, integration and so on. But this, hopefully, gives you a flavor for how quickly we think this is moving along.”

Here’s the takeaway as I see it for investors interested in self-driving cars and the intersection of technology and autos.

A lot of tech-minded investors, analysts, and pundits didn’t take GM seriously when it first rolled out the concept version of the Chevy Bolt two years ago. How could hidebound old GM hope to compete with Tesla Motors and other Silicon Valley darlings, they asked.

Fast-forward to today: The Bolt is shipping, and real-world testing has shown that it exceeds the targets GM announced when it showed that concept Bolt in early 2015.

That’s one of many areas in which GM has delivered on expectations set by Barra, Ammann, and the other members of the General’s management team over the last few years. That’s why I think it will turn out to be a big mistake to look past GM when talking about self-driving cars.