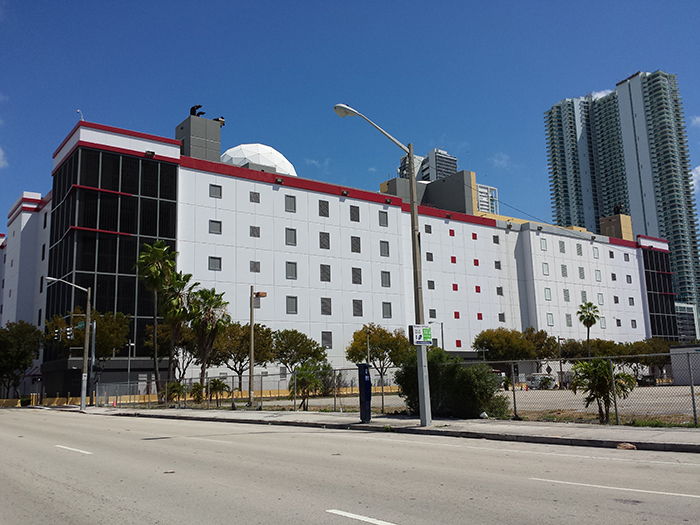 What Miami needs to succeed as a tech hub

Miami is in the first couple of years of a 20-year cycle in emerging as a hub for technology investing, according to one of the venture capitalists who is trying to make that happen.

Brad Harrison has opened a Miami office for his New York venture capital firm, Scout Ventures, and announced at a Miami Finance Forum event that it has invested in Rokk3r Labs, which offers a platform to help entrepreneurs launch companies.

Harrison was part of a panel with Rokk3r CEO Nabyl Charania on the topic of: Is Miami the next Technology Investing Hub? The answer appears to be yes, according to the panelists.

Harrison’s first South Florida deal was an investment in Live Ninja, which has a video chat platform for online customer support.

“The problem we are suffering in Miami is most people are real estate or conservative investors. They don’t understand the early stage asset class,” Harrison said. Another issue is that entrepreneurs in South Florida tend to be sloppier in corporate governance than areas such as Boston or Silicon Valley.

He credited keynote speaker Manny Medina, who launched the eMerge Americas conference last year, with laying the foundation for growth, and said other positive factors include the creative scene in Wynwood, low taxes and the region’s weather.

Charania said Rokk3r started three years ago with five partners and now has more than 20 companies in its portfolio. Among other things, it provides technology support for entrepreneurs.

“Miami has all the ingredients to make me believe we are in the right place at the right time,” he said.

Cr�me de la cr�me companies such as Magic Leap, Care Cloud and Open English are getting the same valuation as if they were in Silicon Valley, but the other 90 percent of technology-oriented companies in South Florida can’t attract capital like those in Silicon Valley or other tech hot spots, said John Trbovich, managing director and co-founder of Arsenal Venture Partners, headquartered in Winter Park.

He also said, “Florida wasn’t part of the conversation, but it’s gone a long way in 12 years.”

Melissa Krinzman, Managing Director of Venture Architects, which has raised $1 billion in capital for its entrepreneurial clients, said investors are attracted to companies that are allied with business accelerators with expectations that the odds of success are better.

Florida was outsized in deal count and activity in 2014, which was a robust year in IT and mergers, said Celine Armstrong, S&P Capital IQ’s Managing Director, Investments Banking – Product Management. “This could be an interesting year as well.”

Climbing the wall of investor worry

It seems like there’s something new everyday for investors to worry about, but Linda A. Duessel, senior equity strategist for investment giant Federated Investors, cut through the clutter during a recent talk sponsored by Coral Gables Trust.

Looking back, Federated got it right in the dark days of November 2008 by concluding that political leaders would support financial markets that seemed on the verge of collapse, she said. In 2009, Federated strategists saw the start of a long-term secular bull market that could last 17 years.

The S&P 500 has more than tripled since bottoming at 666, but  “people are still worried about the next shoe to drop,” she says.

In the stock market, the key question is: What price should I pay for earnings? The answer is that no metric is more closely associated with earnings than inflation, said Duessel. Inflation is now at a level considered Goldilocks for stocks.

Federated was proven to be the closest estimator of where the S&P 500 would finish last year among those asked by Barron’s. It was also the most bullish prognosticator and is again this year with a year-end target of the S&P 500 of 2,350. (The index was at 2,055 in early February.)

A key factor has been the V-shaped recovery in corporate profits, fueled by margin expansion. To get the S&P 500 to 2,350 more job creation and sales are needed, Duessel said. A positive sign is that small and medium-size businesses who hire 70 percent of workers have finally started adding jobs.

Despite worries of a global slowdown, two-thirds of countries were in economic expansion mode through January. “If you are looking for global stocks to cause a recession, you are too early, – Duessel said.

Duessel did offer caution that the next move for bonds is a secular bear market, since interest rates are at record lows. Investors made a lot of money on bonds as interest rates went down, “but nothing lasts forever,” she said.

True inspiration is a rare find at most business meetings. But it was in great supply at a recent presentation sponsored by CPA and consulting firm Vizcaino Zomerfeld.

The event, entitled Environment for Growth, featured an overview of South Florida’s economic outlook for 2015 by Tony Villamil of the Washington Economics Group, who served as the U.S. Undersecretary of Commerce for Economic Affairs under President George H.W. Bush.

The outlook is positive for South Florida’s three counties, he says, which have a combined GDP of $6 billion. Long term fundamentals likely to contribute to their future growth include the fact that our global brand is strong; corporate relocation is growing; we have a burgeoning higher education cluster; our airports are expanding; and Port Miami will soon be the only port south of Norfolk, Va., that can bring in post-Panamax container ships – expected to be a business boon headed our way from the Panama Canal.

Other factors contributing to the economic good news are declining energy prices – which Villamil calls high octane for Florida’s economy as a whole – low interest rates, and the positive business climate currently in the state. The U.S. economy is projected to grow at about 3 percent in 2015, while the state of Florida is likely to surpass it at 3.5 percent.

Ignore the noise of daily reported market news, he advised, and focus on long term, solid investment strategy. Bernstein believes the best news currently is that the economy and investment opportunities are getting better in a bull U.S. market that is nearly six-years-old – but people don’t seem to believe it and aren’t investing accordingly. This uncertainty creates opportunity, he says and notes that markets move on sectors getting better or worse – not good or bad economies.

Inspirational speaker and life coach Curtis Zimmerman, author of nationally best-selling books, including “Life at Performance Level,” drove home the point that we are the star of our own life show. As such, we should be living the dream we write for ourselves. So when someone asks us, “How are you?” the answer should be, “Living the dream,” because we actually are doing just that.

Members of the Patriot National team gathered in the lobby of their headquarters building on Jan. 16 to celebrate the Fort Lauderdale company’s IPO on the New York Stock Exchange under the symbol PN.

Chairman and CEO Steve Mariano congratulated the company’s staffers for their persistence through challenging times that ultimately led to the IPO at $14 a share.

Within a few weeks of the IPO, Patriot announced the acquisitions of Phoenix Risk Management Insurance Services, a managing general agent headquartered in Roseville, Calif., and DecisionUR, a software company that offers sophisticated utilization review solutions in the workers” comp field.

Rick Case has opened another world’s largest dealership in Broward County. This time it’s a 260,000-square-foot, five-story facility at Sunrise Boulevard at the Sawgrass Expressway. It is the largest exclusive Kia dealership globally.

Rick Case Kia features 600 new and used cars and employs a staff of more than 100, which will eventually grow to a staff of over 150.

Rick Case Kia is the fourth world’s largest dealership in Broward County owned by Rick and Rita Case – the others sell Hondas, Hyundais and Volkswagens. Rick and Rita Case have 16 dealerships total and their company says its 1.2 million square feet of real estate is more than any other Broward county dealers combined.

More than $270,000 was raised at Educate Tomorrow’s annual gala event for foster youth.

The non-profit Educate Tomorrow’s primary mission is to provide one-on-one educational mentors, life skills, and in-school support to foster youth that are turning 18 and “aging out” of the system. It supports nearly 300 students.

�Every dollar helps us make education and other life resources attainable for these kids who have been neglected,” said Gibraltar Private Bank & Trust Chief Lending Officer, Chris Damian, who chaired the annual event attended by more than 500 guests at LMNT in Midtown Miami.

Damian is also a co-founder and board member of Educate Tomorrow. He became involved with the program through his initiative by mentoring a family of siblings in foster care.

Weymouth named Downtowner of the Year

It’s not often that companies reach the fourth generation in a relatively new area like South Florida. The Las Olas Co. and its president, Michael Weymouth, have not only done that, but Weymouth has been named Downtowner of the Year by the Fort Lauderdale Chamber of Commerce. That will be celebrated at a March 19 luncheon.

The Las Olas Co. recently concluded a major renovation to its crown jewel, the Riverside Hotel. Weymouth has been very involved in the community as chairman of the Fort Lauderdale Downtown Development Authority, member of Broward Workshop, member of the Chamber’s Council of Economic Advisors, board member for the Riverwalk Trust and past chairman for the Winterfest Boat Parade, among other activities.

Here are excerpts from a Q&A that SFBW did with Weymouth:

What’s your reaction to being named Downtowner of the Year?

I am humbled to be named with past honorees such as Wayne Huizenga, Clay Shaw, Jack Loos, Bill Keith, and more recently Mike Jackson, Jack Seiler, and Romney Rogers.

What are some of the accomplishments you have been able to achieve that are the most gratifying?

The gratification I receive is being a part of the evolution of the next generation of this city. I fondly remember fishing the New River from the Las Olas Isles to the I-95 overpass and being able to use the Landmark Bank building as a point of reference.

The decision for this city to “grow up” was made several years ago, which it has done very nicely, but now it’s time to manage that growth.

It has been very rewarding to have a hand on putting the luster back on [the Riverside Hotel] and to be a part of the renaissance along Las Olas Boulevard.

What trends do you anticipate in the Las Olas area?

We are focused on quality of life issues such as pedestrian safety, commercial truck traffic and constantly trying to bring new and different ideas to the downtown and Las Olas Boulevard.

The Barry & Judy Silverman Foundation funds local educational and social services with a special focus on people who are disabled or have special needs and safeguarding the improvement of Jewish lives. Barry Silverman is a retired orthopedic surgeon and active investor in health care and real estate. ?

A photo of Boca Raton Regional Hospital’s iMRI/iCT scanners was misidentified in the February Special Report on the Future of Health Care as a GE 3T MRI at Broward Health. The scanners at Boca Raton Regional Hospital’s Marcus Neuroscience Institute are found in only a handful of facilities nationwide and enable doctors to view high-quality, real-time scans of a patient’s brain and spine during a procedure. This results in safer and more precise surgeries and reduces the need for additional postoperative imaging procedures. The iMRI/iCT scanners move along a ceiling-mounted track within the operating room suite, eliminating the need to transfer a patient to and from the diagnostic room and operating room.