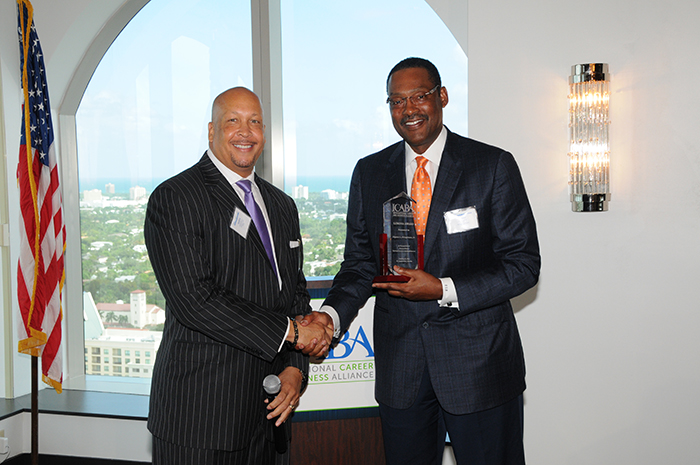 Building Wealth from the playground to the boardroom

Former Miami Dolphins center Dwight Stephenson says legendary University of Alabama Coach Paul “Bear” Bryant always told him to not only have a plan B, but also a plan C. That advice became vital after a Monday Night Football game when Stephenson was blindsided by an opposing player, severely injuring his left knee and ending the future Hall of Fame member’s career.

Stephenson has gone on to be an entrepreneurial role model as CEO of D. Stephenson Construction, which he and his wife, Dinah, founded in 1992. The company’s projects have included work at Fort Lauderdale-Hollywood International Airport, more than 20 Broward County public schools, Memorial Health System, Florida Memorial University, the Broward County Judicial Center, four public libraries and the Mount Hermon AME Church.

Stephenson was among the highly successful entrepreneurs who spoke at the ICABA Wealth Summit on Oct. 23 in Fort Lauderdale. ICABA (icabaworld.com), which is led by President and CEO Jerome Hutchinson Jr., helps connect and provide information and opportunities to black professionals.

Stephenson says he chose the construction field because he liked being in control and South Florida lacked a major black construction company. In some ways, it paralleled why he became a center, a leadership role that black players generally were steered away from at the time, he says.

One key piece advice from Stephenson: “Once you start something, you don’t quit. The times when it gets tough are when you learn the most about your team, your people and your product. You make it out of that, and you are just that much more committed to your success.”

Stephenson spoke on a panel called “Building Wealth from the Playground to the Boardroom” with Ulysses “Junior” Bridgeman, who had a 12-year career as an NBA player. He is the CEO of Manna Inc. of Louisville, Kentucky, which oversees the operation of 400 restaurants, including Wendy’s, Chili’s, Perkins and Golden Corral locations. His net worth has been estimated by Forbes at over $200 million.

When he was a players” representative, Bridgeman says he noticed how the owners would talk business deals during breaks. He realized basketball was just one of many businesses in which they were involved.

Jim Fitzgerald, owner of the Milwaukee Bucks, where Bridgeman played most of his career, told him if he got involved in business, he would have only two problems: people and money. “After you make your first million dollars, it’s just a matter of putting more on top of it,” Bridgeman recalls him saying.

Bridgeman didn’t have an auspicious beginning in business. He and NBA star Paul Silas opened a Wendy’s in Brooklyn’s Bedford-Stuyvesant neighborhood well before it was trendy. They immediately started losing money. About six months into the venture, someone broke into the business, tried to drag out the safe, started bleeding and then set the restaurant on fire.

“That was probably the best thing that happened to us. It put us out of business for a while,” Bridgeman said, drawing a laugh from the audience.

Bridgeman got training in the restaurant business and also became very people-oriented – down to bailing employees out of jail if they got into trouble. “People will take what you want to heart when they know they care about you,” he says.

The remote is fabuloso

Here’s a bit of multicultural marketing advice: Don’t just think you can launch a product and then think about marketing to Hispanics, says Javier Garcia, a vice president and general manger of multicultural services for Comcast Cable, which has the Xfinity brand.

Garcia knows something about the topic after living in Miami about a decade and leading Yahoo! U.S. Hispanic. He has now moved to Philadelphia to help Comcast Cable, which offers video, home security, Internet services, voice services and Internet of Things (IoT), partnering with Nest and Lutron on the latter.

One way Comcast has approached multiculturalism involves the structure of its new X1 Platform, which has apps, a much simpler remote and easier on-screen choices.

For example, the main On Demand screen has a Latino category, and Comcast zeroed in on what Garcia calls “passion points,” such as soccer. Users can see a game on the left side of the screen while scrolling through teams and scores on the right.

Users can also filter On Demand programs by language, such as looking for preschool content in Spanish. The old method of looking for a SAP setting has been replaced by a way to filter all content for SAP.

The remote also has voice command. Say “Celia Cruz,” and it will show you programs about the late Queen of Salsa.

The service is also cloud-based, so Garcia was able to download five movies on his iPad to watch on his recent trip from Philadelphia.

So what should companies in general think about when marketing to Hispanics? Garcia outlined the biggest mistakes:

” Thinking of marketing to Hispanics as the same as marketing to just Spanish speakers; you are missing the larger opportunity of the 80 percent of Hispanics who are bilingual.

” Thinking it’s a one-size-fits-all market. There is diversity, such as young families with tight wallets, urban dwellers and those in suburbia.

The number of completed deals reported by business brokers in South Florida was up 15 percent to 368 year-to-date deals near the end of October, reports Andy Cagnetta, who was the subject of last month’s SFBW CEO Connect; prices were down 5 percent to $365,000.

Cagnetta said his company, which is the state’s largest business broker, had a 1 percent increase in the sales price of businesses, while transactions were up
5 percent.

A tasty bite of the arts

Hoffman’s Chocolates is providing a tasty way to support the arts with its new limited-edition Art Bars Collection.

Half of the sales prices goes to the respective artist or the nonprofit organization of their choice, including the Animal Recovery Mission, the Gallery 2014 Girl Noticed project, Paws 4 You Rescue, Big Cypress National Preserve, the Guy Harvey Ocean Foundation and the Irie Foundation.

The 6-ounce bars are sold at Hoffman’s Chocolates retail locations for $10 each and include a poster with the artist’s work. A set of six for $60 includes all the posters.

Mission United supports service members, veterans and their families by helping them
re-acclimate to civilian life in areas such as employment, education, health, legal assistance, emergency financial aid and housing.

Ramola Motwani, CEO of Merrimac Ventures, was the chairwoman of the gala, and Broward Mayor Tim Ryan was the host for the event, which took place at the Greater Fort Lauderdale/Broward County Convention Center. Service members from each Broward city were honored on stage.

“We are honored to be able to host such an amazing event with the support of so many generous friends, colleagues and community members,” said Kathleen Cannon, president and CEO of United Way of Broward County.

JM Family Enterprises and Southeast Toyota Distributors were the title sponsors for this year’s gala, while Broward Health served as the presenting sponsor.

Somewhere under the rainbows

CC Homes, the developer owned by Armando Codina and Jim Carr, and partner BBX Capital Real Estate had an auspicious groundbreaking for Bonterra with a double rainbow providing a backdrop.

Bonterra, which is inside a BBX Capital master-planned development, is notable as one of the few undeveloped parcels of land in northern Miami-Dade County. It is on the west side of I-75, just south of Miami Lakes Drive.

CC Homes is building 394 single-family residences at Bonterra, priced from the mid-$300,000s.

Get some help securing IT assets

ARC Broward Electronics Recycling Services is celebrating a new name: ARC Broward IT Asset Recovery. The new name helps highlight how the nonprofit organization has gone from just picking up and recycling electronics to offering IT asset disposition, data security and asset tracking and reporting.

ARC handles more than 2 million pounds of IT assets a year and has a 25,000-square-foot secure facility. It has increased the number of employees and individuals with disabilities that it trains and places in jobs from 8 to 35.

One year after receiving $25,000 in seed funding, the inaugural class of Florida Atlantic University’s Tech Runway recently participated in the “Venture Vintage 1” graduation.

The class includes BedaBox, a company that simplifies shopping and shipping outside the country using any currency; Design Comfort Shoes, a company that has a patent-pending comfort system for high heels; Stand4, a website that connects individuals, charities and corporations to enhance the charity donation process; and Modulux Lighting, a company that provides more light with less power through its LED lighting fixtures.

Tech Runway has supported nine startups in its first year using 50 trained mentors, and reports that its companies have raised $5.76 million in seed funding and created 35 new jobs with an average salary of $75,000.

Boies, Schiller & Flexner LLP recently celebrated 15 years in South Florida at an event in Miami. The firm started locally with a single partner, Caryl Boies, in an office in Hollywood. Today, it has grown to more than 50 lawyers with added offices in Miami and Fort Lauderdale.

In Fort Lauderdale, the Kim Vaughan Lerner law firm celebrated its 10th anniversary with a reception at the Riverside Hotel. The minority law firm is a certified minority business enterprise and a leader in pro bono cases. ?