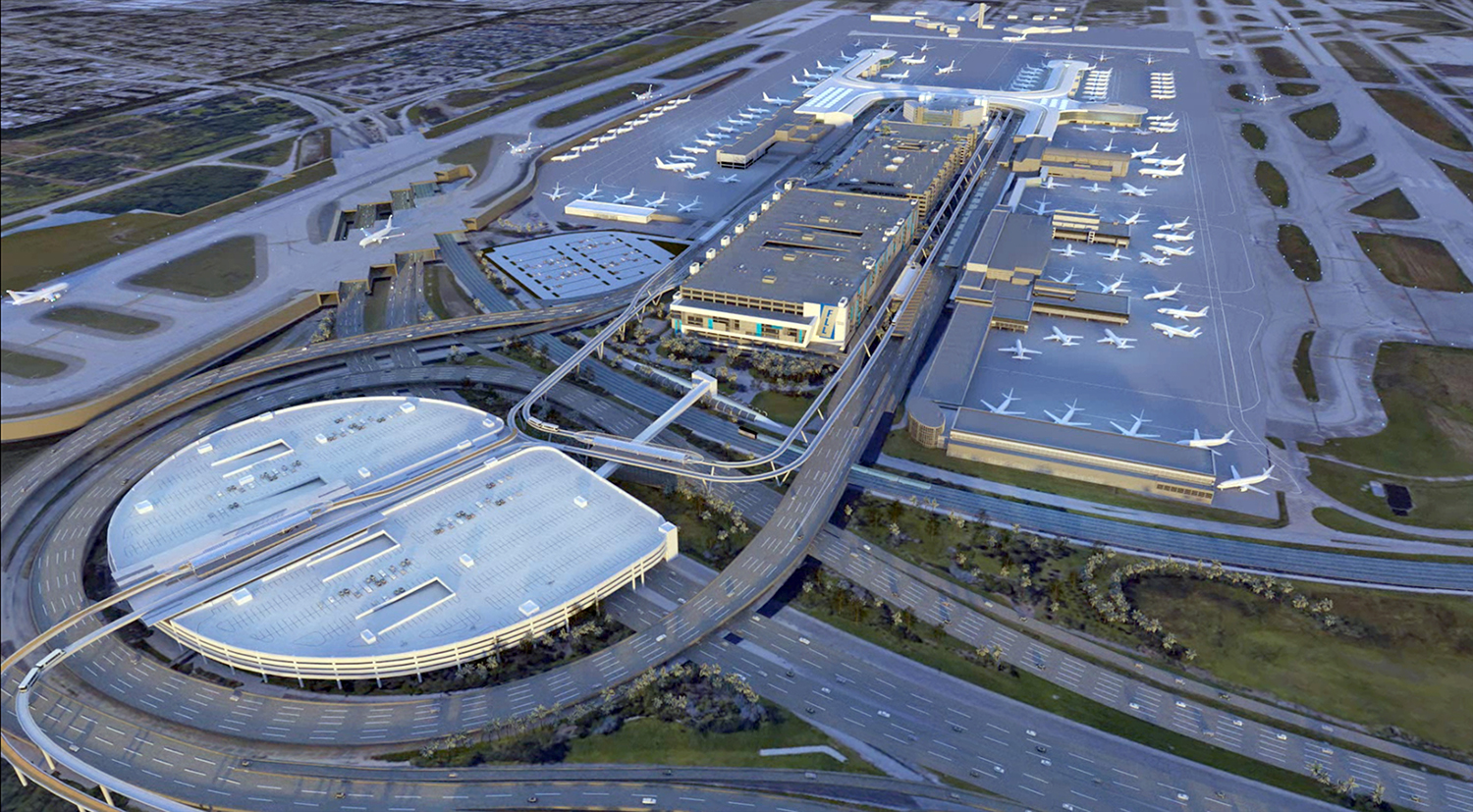 While South Florida is well known as a global epicenter of the marine industry, an underappreciated success story is the size of its aviation industry.

After a while, Coddington asked about the acknowledgment and was told that the 954 area code was recognized in the aviation industry for craftsmanship, quality and integrity.

On the passenger side, Fort Lauderdale-Hollywood International Airport can save relocating corporations an average of 27 percent on aviation costs because of its abundance of low-cost carriers, according to a study by the Alliance, the public/private economic development organization for Broward County. “It really lends itself well when we recruit cost-conscious companies,” Swindell says.

The Alliance and SFBW explored just how big the aviation impact is with a roundtable discussion at Alliance headquarters in Fort Lauderdale. It included the leader of Fort Lauderdale-Hollywood International Airport, representatives from three airlines and three companies involved in maintenance, parts and services fields.

Fort Lauderdale-Hollywood International Airport was the fastest-growing large-hub airport in the United States from 2013, growing 53 percent from 23 million passengers to 36 million passengers, says Mark Gale, CEO of the airport. The economic impact is estimated at $37.5 billion a year and roughly 17,000 jobs are tied to the airport.

Gale expects FLL (the airport’s international city code) to rank 18th in total passengers among U.S. airports for 2018. That’s higher than New York’s LaGuardia and the hub airports in Philadelphia and Detroit. FLL is expected to rank ninth with 8.5 million international passengers.

A couple of years after completing a new south runway, the airport is tearing up the north runway, which dates back to World War II. The airport is pouring new concrete, which is 17 to 21 inches deep, in the middle of the runway. That should be good for 30 years.

By the beginning of July, 1,000 cubic yards of concrete had been poured and 8,000 tons of asphalt installed. The work on the 120-day project is going on around the clock and involves 15 subcontractors with 150 to 200 workers.

There has been plenty of work on terminals as well.

The $333 million construction project on Terminal One, used by Southwest Airlines, is pretty much completed, Gale said. Terminal Two, home to Delta Air Lines, is being revamped in a $220 million project that should be completed by early 2022. Moving sidewalks behind the security screening will make it easier to move from Terminal One to Terminal Two.

The airport is working to enhance concessions and terminal three will have a Bokamper’s, Rocco’s Tacos and Bonefish Grill.

The airport is working on updating the 2010 master plan to carry through to 2035. The number of gates is envisioned to increase from 63 to 95.

One of the challenges is moving people in and out of the airport. The airport is talking with Brightline, now Virgin Trains USA, about having a station at a new intermodal center on the east side of the airport. A people-mover system would loop around the airport. Gale envisions the Palm parking garage being torn down and redeveloped as a commercial space with more retail and restaurants plus an 800-room hotel.

The airport’s biggest allure is great connectivity and an abundance of low-cost carriers.

“We have some of the lowest, if not the lowest average, one-way fares of any major airport in the United States,” Gale says. “If you take our top 50 destinations domestically—we have nonstop service to all 50 of those—on many of those, we have competition, multiple airlines serving those destinations.”

From January to May, JetBlue ranked as FLL’s top carrier with a 22.7-percent market share. It has up to 81 daily departures to 35 destinations, including many Caribbean islands and the northern part of South America. JetBlue’s longest flight is from FLL to Lima, Peru, says JetBlue director Jason Annunziata. It takes six hours.

Having Port Everglades close to the airport is also a big plus, he says. A Brightline/Virgin Trains USA airport stop would also be beneficial as well.

Passengers tell JetBlue their airport of choice needs to be simple and fast, Annunziatta says, which is what the airport’s leadership and the airlines strive to provide. “If we can get people out of Miami to make a right instead of going straight to Miami International, I think that says something about our success here,” Annunziatta says.

Lately, passengers also have been attracted by JetBlue’s Mint service, which provides lie-flat seats and pampering with food and beverage menus on flights to Los Angeles and San Francisco.

Spirit Airlines is the second-busiest carrier at FLL, with 3.52 million passengers in 2019 through May, up 17.6 percent from the previous year.

Spirit long has been known as an ultra-discount carrier but more recently has emphasized on-time performance.

The airline has quintupled in size since he joined 11 years ago, Canfield says, and is approaching 190 aircraft. By the end of 2021, it expects to have more than 300.

Canfield says the airline is economically important to the market since it appeals to highly price-conscious consumers who might want to vacation in South Florida.

Spirit in July was listing 152 destinations from its hub at FLL. Like JetBlue, it offers an abundance of flights to the Caribbean and Central America. Its South American service is focused on the northwest part of the continent.

One issue for Spirit is a lack of capacity to add because its gates are already highly used.

“Probably 50 percent of our international growth has been through Orlando, over the last 12 months, primarily because of the constraint here,” Haralson says.

Canfield also said the development of rail passenger service to FLL is significant given public disdain for traveling on Interstate 95.

“This is the fastest-growing large market in the country from an aviation point of view, so that percentage growth is way outstripping Miami and Palm Beach,” Canfield says. “The certainty of reliable high-speed, local rail service is going to make a huge difference.”

A key long-haul international carrier at FLL is Emirates, which added service in 2016. It has 265 aircraft with the world’s biggest fleet of Airbus 380s and Boeing 777s. When Emirates was looking to expand to South Florida, FLL was the obvious choice because of a business partnership with JetBlue, says Bruce Beckman, a senior sales representative. Emirates’ leaders also liked FLL’s facilities, ease of connections and demographics.

Emirates provides the only nonstop flights from FLL to the Middle East. Its hub in Dubai, United Arab Emirates, offers an array of global connections to Europe, the Middle East, Asia and Africa. For example, Emirates serves 10 cities in India.

South Florida has a tradition of being a hub for airline maintenance dating back to the days of Eastern Airlines, said Alex de Gunten, business development officer for HEICO Aerospace Corp. There are an estimated 20,000 people in Florida working in the maintenance, repair and parts field, mostly in South Florida.

The field offers an abundance of high-paying jobs. The economic impact has been estimated at more than $2.7 billion.

HEICO is one of the giants. For fiscal 2018, it had revenue of $1.77 billion and net income of $259 million. The New York Stock Exchange-listed company, which has offices in Hollywood and Miami, has about 5,000 employees globally and 1,000 in Florida, de Gunten says. The company has customers all over the world.

If airlines are doing well, then HEICO is doing well, de Gunten says. The industry is in a positive state now with new jet orders, but a lot of HEICO’s business involves parts and service for aircraft that are 10 to 15 years old.

GA Telesis of Fort Lauderdale is another South Florida aviation giant with $1 billion in assets under management. The company provides integrated solutions to more than 3,000 customers in 19 countries.

Panelist Pastor Lopez is president of GA Telsis’ maintenance, repair and overhaul services division. GA Telesis is having double-digit growth as the North American market is growing 4 to 5 percent a year, a bit more than the European market, but the big hot spot is Asia with 10 percent growth.

South Florida is a global hotspot for MRO companies, he says. At the last MRO tradeshow he went to, about 50 percent of the companies were connected to South Florida. He counts five independent metal-plating companies and about 10 independent machine shops.

“The impact of aviation in South Florida is huge,” he says.

Lopez says it would be great if FLL had more hangar space for MRO work. Gale says the airport has been in conversation with multiple parties about hangar space that could handle large “group five” aircraft, which includes the Boeing 777. Lopez says that would attract more maintenance jobs to South Florida.

National Jets, a fixed-base operator with a 20,000-square-foot hangar on the north side of the FLL, has a thriving MRO business for private and business jets, such as Learjet, Gulfstream, Citation and Falcon.

National Jets is the only operator at FLL certified as an FAA part 145 repair station, says Reggie Nichols, National Jets’ general manager and director of safety.

National Jet started out as a family-owned car service station in Durham, North Carolina, in 1945, but in 1960 moved to Fort Lauderdale and started leasing and operating large transport aircraft, its company history says.

“I believe we were the first stakeholder with an actual building before there was even a fence around the airport,” Nichols says. The 108-employee company has a 40-acre leasehold on the north side and its subtenants include FedEx, according to the company’s website.

National Jets has a fleet of long-range Learjets available for charter and a 24-hour flight crew center. It offers an array of aviation management services and makes more than 500 flights a year as an air ambulance service company.

The company also sells about 10 million gallons of fuel a year, Nichols says. “It is a big part of the economic impact for the area.” ♦