Are Great Whites Lurking in Our Waters? 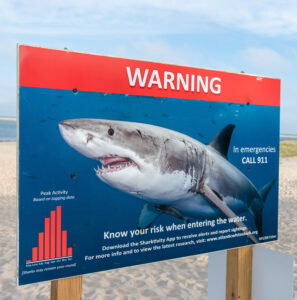 Of all the high-season travelers to escape to South Florida this winter, just one ventured some 2,200 miles only to set off alarms for swimming in the ocean. That’s because Acadia—a 1,602-pound female great white shark (nearly 11 feet long), originally tagged by the data-driven nonprofit organization Ocearch 14 months earlier in Nova Scotia, Canada—pinged in mid-January while off the coast of the Florida Keys.

That same month, fishermen on a charter boat departing out of Fort Lauderdale caught (and released) a 13-foot great white. In October 2019, there was yet another great white sighting—this one, a 2,000-pounder swimming off Key West.

They’re the kinds of stories that might be shared on social media—accompanied by John Williams’ Academy Award-winning score from the movie Jaws. However, in the bigger picture, are these simply isolated incidents? Or do we need a bigger boat?

Could it be that great white sharks are starting to call South Florida home?

Bob Hueter, chief scientist for Ocearch, an organization that uses global-positioning tags to track travel patterns of great white sharks and collect data, suggests that it may be a matter of perception. A better question, he says, might be, “Are we seeing more great white sharks in South Florida than before?”

Great whites, similar to their human snowbird counterparts, always migrate south from the northwest Atlantic Ocean as water temperatures change. The difference, Hueter says, is that there’s more awareness of the predatory fish.

“More people in the water have smartphones, GoPros and other devices that allow for recordings of great white sharks,” Hueter says. “Those are all going out on social media and that gives the perception that there are more great whites [off the coasts of Florida] than ever before.”

What about climate change contributing to more great whites in South Florida waters?

Neil Hammerschlag, director of the Shark Research & Conservation Program at the University of Miami, researches the effects on shark species of global change events, including urbanization, light pollution, chemical pollution and boat disturbance—all of which might influence shark migration.

“It’s certainly within the realm of possibility that changes in ocean climate could be impacting their movements, but there is no evidence for it right now,” Hammerschlag says.

Farther north, Ocearch has discovered great whites in higher abundance than previously recorded in Nova Scotia, where global warming could be playing a role. “This is in terms of them spending more time in these northern—and what used to be cooler—waters,” Hueter notes.

“[But] I would discount ocean warming for great white sharks in Florida waters,” he says. “They aren’t particularly tropical; they live in more cool-to-temperate waters. That’s not going to bring more sharks to Florida by itself.”

That said, there is another factor connected to increased sightings on which all shark experts can agree. After decades of decline, the great white shark population along the East Coast of the U.S. slowly has been increasing since the late 1990s. Hueter credits stronger protection of the species through shark conservation measures.

However, people shouldn’t panic, he cautions. “It’s not that we will have thousands of great white sharks off the beach overnight. They don’t reproduce that way,” says Hueter, who notes that the growing great white community is helping to put the ocean back into balance.

They also don’t attack humans in the way that Jaws would lead you to believe. The International Shark Attack File confirmed great white sharks were involved in at least 16 unprovoked bites in 2020, including six of the year’s 10 fatalities: four in Australia, one in California and one in Maine. None in Florida.

While that sounds like a significant number, think about it this way. According to research done by the ISAF, the odds of dying from any shark bite are 1 in 3,748,067.