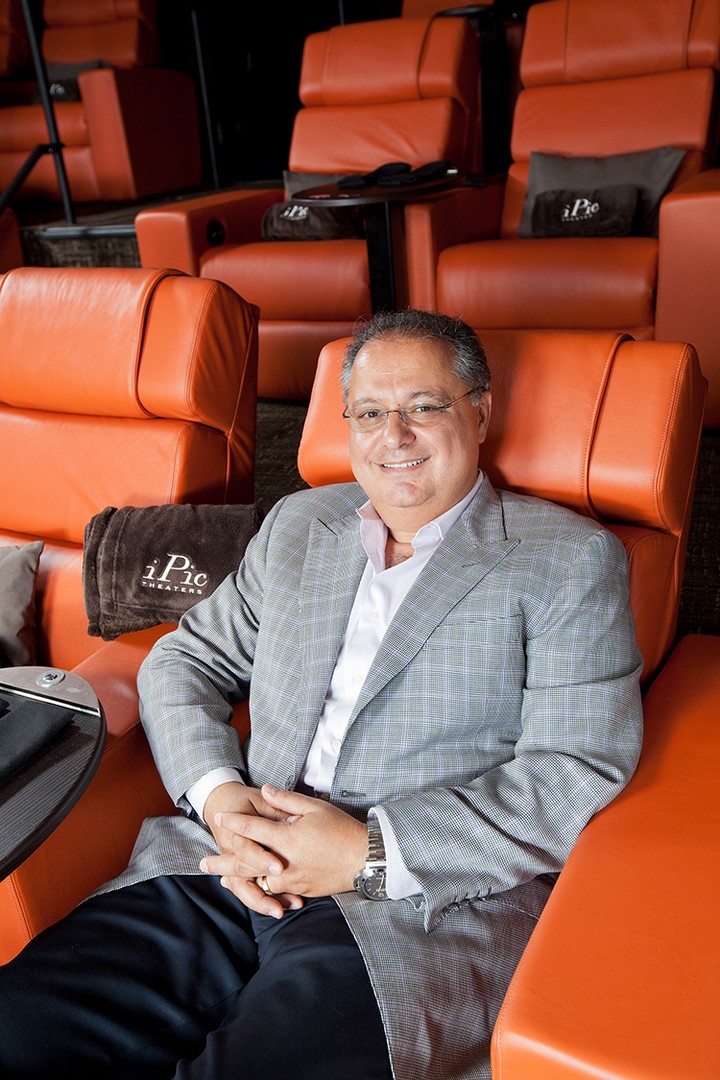 Hamid Hashemi says he got into the movie business because he didn’t know any better and stayed because he is a sore loser.

About 30 years later, the founder, president and CEO of iPic Entertainment appears to be the happy winner: Hashemi has developed and successfully launched three companies involved in motion picture exhibition. iPic Entertainment currently has an average of 1.1 million customers in its 11 locations, with 12 more under development.

In South Florida, he expects to open a North Miami theater in 2015 and is considering Coral Gables and other Miami locations. The iPic Theater in Mizner Park in Boca Raton is already open. All of the theaters here are east of I-95, to attract those with more free time rather than families whose time is more limited.

Hashemi’s success seems to stem from knowing that being in the movie business isn’t really about the movies. He learned this the hard way, he says, when he bought his first theater in 1984 in Coral Springs. Then goliath General Cinema open one a mile away and Hashemi’s business suffered.

Lesson One: “One movie theater can be very like another, so the question is: How do I get people to my theater instead of others? You elevate the experience to something memorable – a great night out,” Hashemi says. “Make the environment exciting and luxurious with unique amenities – like pillows and blankets, great food, drinks and service. Include the popcorn in the ticket price, offer extremely comfortable seats – and no sticky floors.”

His iPic Theaters brim with fun – so much so that the average customer spends 4.5 hours there each visit. They choose from three culinary concepts driven by Wolfgang Puck-trained chef Sherry Yard: Italian, barbecue and seasonal American.

A gastro pub concept is expected to launch in 2015. Mixologists make creative cocktails. Guests can enjoy food and drinks in restaurant and bar environments or be served right in their movie seats. Tickets cost $18, depending on seats.

What they won’t find are the things customers typically complain about in their average movie experience, Hashemi says: noisy children (because the demographic is not family-driven); over-priced popcorn (because it’s free); sticky floors and seats (because they are clean); and monotonous commercials (because iPic shows variety show-like entertainment before its movies). He is hoping to attract many who have been turned off by that experience to his theaters because they promise luxury; lure those who typically watch movies at home because they can make a night or afternoon of it; and increase the frequency of movie-going among his clientele.

“This is a seven night a week business – and this is how you fill your theaters seven nights a week,” he says. “In addition to attracting new customers with what we offer, we have a lot of repeat customers.”

He founded Muvico Theater in 1984, growing the company in less than 10 years to over 100 screens in South Florida, before selling to Regal Cinema. From 1995 to 2005, under the same Muvico Theater name, he began building a new generation of megaplexes with 18 to 24 screens. During this period, he built some of the nation’s most exciting and highest attended theaters, such as the Egypt-themed Muvico Paradise 24 in Davie; the Egyptian Theater in Baltimore; and Boca Palace 20 in Boca Raton.

Under Hashemi’s leadership, Muvico broke quite a bit of industry ground. It was the first movie exhibition company to offer amenities such as childcare centers, assigned seating, valet service and gourmet concessions. Muvico Palace was the first theater in the country to offer a premier movie experience and dining option under one roof, and was recognized throughout the industry for its innovation.

In 2006, Hashemi says he founded iPic Entertainment to pursue his vision of creating social destinations anchored by theaters and making the luxury movie-going experience available and affordable to the general population. iPic Theaters has 11 sites in California, Illinois, Texas, Washington, Wisconsin, Arizona and Florida. New York, New Jersey, Texas, Maryland and Pennsylvania are next.

“We are considered a desirable anchor tenant because we bring a higher-spend customer to all of our locations,” he says. “It is a good time for the expansion from a real estate perspective.”

Even during the recession, that customer was spending on movies.

“They may forego vacations, but a night out at the movies is still the least expensive form of entertainment. We really didn’t have problems then,” Hashemi says. “Over the years I have learned what people like in their idea of a great night. They know they can count on it at iPic, which is why they keep coming back.” ?