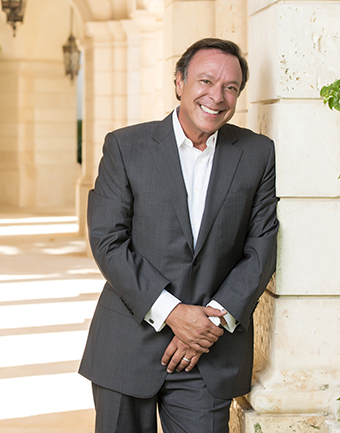 The Travels of Mike Fernandez

What do you do when you’ve exceeded every one of your goals and then some? Or when you’ve come from being an impoverished immigrant to becoming a billionaire, and one of the richest men in Miami? Or when you create 25 companies from scratch, turning into one of the most successful healthcare entrepreneurs in America? Or when your personal holdings include a 4,000-acre plantation near Tallahassee, 25,000 acres of property in Alabama, a helicopter, a plane and a Coral Gables mansion valued at $36 million? Or when you’ve already donated more than $125 million to healthcare and children’s causes in the Miami community?

If you’re Miguel “Mike” Benito Fernandez – known to his friends and family simply as Mike – you take a 508-mile, 32-day trek through Europe to raise money for Miami Children’s Hospital, which saved his granddaughter’s life several years ago.

Then, you write a book about the adventure – about both the one from France to Spain and the one that took him from his beginnings as a poor Cuban immigrant to the heights of economic prosperity in his beloved adopted country.

And, if you’re Mike Fernandez, you donate 100 percent of the proceeds from that book, “Humbled By The Journey, Life Lessons For My Family�And Yours,” to the Early Childhood Initiative Foundation, a nonprofit focused on early childhood education started by Fernandez’s pal, former Miami Herald publisher David Lawrence.

“It is not a book about vanity or ego,” says Fernandez, 62. “It is a book about delayed gratification. And when you help with children’s causes, it puts you on the right side of the ledger.”

Lawrence, who joined Fernandez for 72 miles of one of the walks, is not surprised about Fernandez’s decision to donate the profits from his book.

“I think of him as one of the most generous and good people I know,” he says. “Much of what he has done nobody knows about. He’s given away millions, most in ways people don’t know. The highest form of charity is when people don’t even know where the money came from. Our country is lucky to have him.”

The book, written with former Miami Herald reporter Marty Merzer, details Fernandez’s humble roots, moving with his family from Cuba to New York at the age of 12. He worked as a floor cleaner and delivery boy and, eschewing college, joined the army, where he incurred five herniated discs in his back after 72 jumps out of airplanes.

After the army, Fernandez tried his hand at selling insurance door to door, where he discovered a passion for business. From there, he delved into entrepreneurship with both feet, founding the Coral Gables-based MBF Healthcare Partners, a private equity firm that invests in healthcare service companies nationwide. The portfolio includes Navarro Discount Pharmacy (which was just sold to CVS Pharmacy) and a managed-care company, Simply Healthcare Plans. He also started a partnership with the University of Miami and Magic Johnson Enterprises to provide services to South Florida’s HIV/AIDS population.

The book also explores Fernandez’s grueling trek last November along the El Camino de Santiago trail in Europe. Out of the 32-day trek, Fernandez was sick for 21 days. That’s when the book was born: he used the down time to start writing about his feelings, thoughts and values.

Fernandez’s wife Constance and friends like Lawrence and Miami-Dade College President Eduardo Padrón had been pushing Fernandez to write a book for years, but his response was always the same: “That’s egotistic and vain.”

Finally, when Lawrence and Fernandez were crossing the northern tip of Spain, they struck a deal. Fernandez agreed to write a book if Lawrence would help him find an editor and publisher. And he insisted that all the proceeds from the book would help children’s education.

Fernandez finally felt he had an adventure worthy of a book. On the trek, he contended with vast changes in the weather, from snow to 80-degrees overnight, walked 58,000 steps a day and expended 6,100 calories daily. He befriended hikers from Korea, Colombia, and other countries all over the world.

“It was a grueling experience, but wonderful,” recalls Fernandez. “You’re completely equal to the person next to you, whether it’s a rock star or a simple person. The simplicity of people and how wonderful they are is very special. It’s a grounding and spiritual experience.”

Since then, Fernandez has taken three more treks along different paths throughout Europe, and plans another with his 11-year-old son this summer.

Is there another book in Fernandez’s future? Don’t count on it, says the billionaire, who is more Bill Gates than Donald Trump.

“I’m the most boring person in the world,” laughs Fernandez. It’s a statement few would agree with.