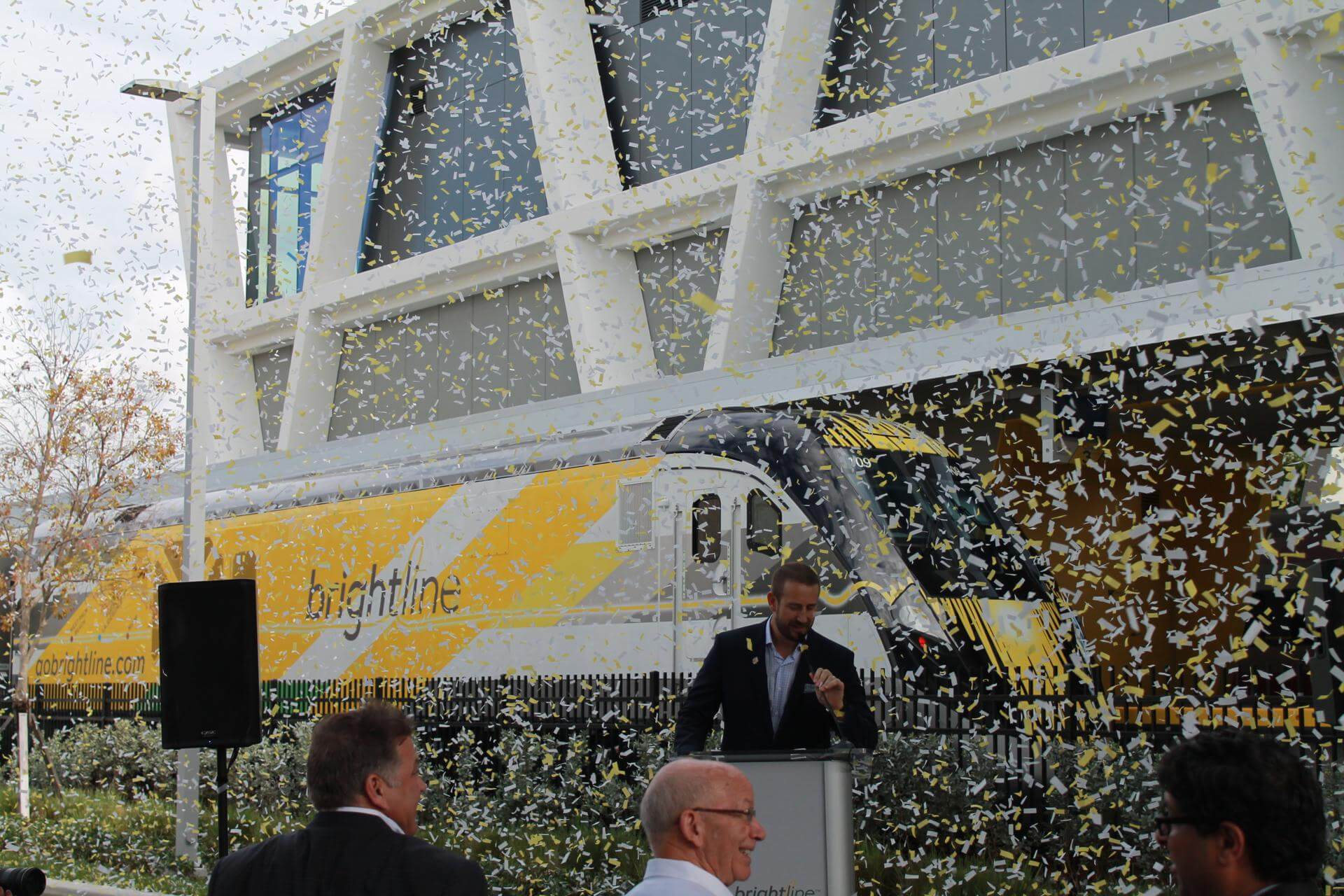 Brightline unveiled it’s new high-speed rail service to the media and I was aboard for the ride from Fort Lauderdale to West Palm Beach, so I’ll share my experience. There’s also a photo gallery at the end of this blog.

The garage for the Fort Lauderdale station is a seven-story structure near Broward Boulevard and the Florida East Coast Railway tracks on the northern edge of downtown. While there were plenty of parking spots on the bottom floor, I decided to trek up to the top floor and found one of the best views you can find of the downtown skyline. Workers were still putting bright yellow fabric canopies on the upper level.

If it’s rainy out, bring an umbrella because the garage is across the street from the actual station. The station has a very smart modern design with Brightline’s signature V-shaped columns. Walk through the front door and there are several kiosks to buy tickets. You can type in your name and other information to create an account.

Unfortunately, Brightline had some opening day glitches. I tried to buy tickets earlier in the morning online, at the station and with the new Brightline app, but they all ran into an issue when payment came due. (A Brightline executive tried the app and also ran into problems.) Late in the afternoon, I was able to buy tickets on Brightline’s website.

There was a short presentation with VIPs and the media before the ride. If you are wondering who came up with the Brightline, the answer is Wesley R. Edens, the co-founder, principal and co-CEO of Fortress Investment Group, which owns Brightline. Sports fans may also know him as co-owner of the NBA’s Milwaukee Bucks.

Edens understood the congestion on South Florida highway and since Fortress owned the railroad, he approached Gov. Rick Scott to get his ideas on the concept and received support. Brightline initially is launching between West Palm Beach and Fort Lauderdale with Miami to follow in a few months. Edens said service should start to Orlando International Airport in 2020.

After some brief remarks from other elected officials, there was a blast of confetti and it was time to board the train. Passengers take an escalator or elevator up from the station, go through security if they have large bags and then take another escalator or elevator down to the platform.

The trains are sleek and modern. It’s a much different experience than the TriRail and Amtrak trains I’ve ridden. The leather seats are very comfortable and everything is fresh and new. There are places to plug in your chargers. The WiFi worked well. There’s also a clever design for seat tray tables. You can pull down a mini-tray to put your beverage or a full tray if you need to plunk down your laptop.

A few blasts of the horn and we started rolling out of Fort Lauderdale. It was a colorful scene with murals facing the tracks as we went through the FAT Village area. We hit 59 mph just north of downtown Fort Lauderdale and hit 79 mph in Pompano Beach, according to the Waze app on my smartphone.

Much of the way, the train parallels Dixie Highway so it was a novel experience whizzing past traffic. The scenery is quite a mixed bag from nature preserves, auto salvage, schools, parks, shiny new residential and just about anything else you can think of. Some property owners should think of tidying up and doing some nice signage to advertise their businesses.

Brightline courteously provided food for the media. I had a tasty veggie sandwich on the way up and a nice roast beef sub on the way back. There was also an array of fresh fruit and a tasty piece of banana cake. Food and beverages will be available for purchase on board. The Select Service, which costs $15 one-way compared with $10 for the Smart Service, includes 21 inch wide seats (two inches bigger), beverage service, snacks and access to the premium lounge.

The ride was very smooth compared with other trains I’ve ridden, which usually sway from side to side. The cars are pretty quiet except when the engineer has to blow the horn. That happens a lot because there are a lot of crossings. Brightline is still working on safety measures that will ultimately end the need to blow the horn for crossings.

We arrived in about 35 minutes, which is what Brightline expects. We had a little time to go around the station. There’s a food service counter that’s reminiscent of a Starbucks. Most important to some of us, there is beer on tap. There was also an array of grab and go beverages and snacks that customers can scan to do a self checkout. Make sure you have a credit card, because it’s a cashless setup. There was also a cute children’s play area overlooking the tracks at the north end of the station.

The trip back was just as smooth except the train slowed just north of Fort Lauderdale because of a restricted speed zone.

My overall impression was very favorable. As a Fort Lauderdale area resident, I’m eagerly awaiting service to downtown Miami where I have to budget 90 minutes to make appointments because of congestion on I-95. Moreover, parking in Miami typically costs me about $15, which is more than the basic train fare.