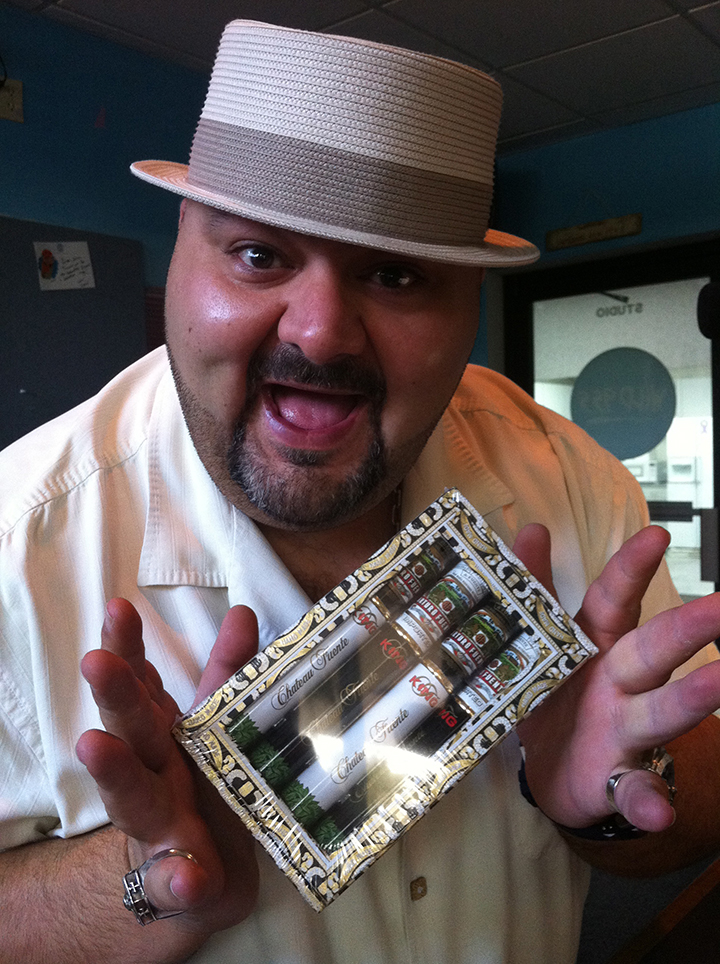 Cigar retailing is typified by a guy who loves to smoke and opens one store. Abe Dababneh has built an empire.

His Smoke Inn stores have grown to 12 locations with online sales, the Microblend Series line of cigars, and the Sindicato cigar company he formed with other retailers. He also has a weekly radio show and The Great Smoke, a charitable cigar event that brings over two thousand people to West Palm Beach each year. Dababneh’s success comes from a combination of business acumen, attention to detail and marketing savvy down to his cartoon character on SmokeInn.com. His monikers include “Honest Abe” and “Big Delicious.”

There’s a reason many cigar retailers, or businesses in general, never get past one location, he says. Patience is needed to build a business, but many entrepreneurs expect to pull down a six-figure salary pretty quickly.

“They will try to live past the means of the business. When I started I was living on $300 a week,” he says.

An example of his attention to detail is how he went through six cappuccino machines before he found the right one for his headquarters and flagship location in Boynton Beach, which is called “Casa de Montecristo” after the famous cigar. He sells about 50 a night on Saturdays – and they better look perfect before they leave the counter, he says.

He’s strives to create an enjoyable retreat with a full liquor bar, a superior selection of cigars and a rare cigar room that has memorabilia and even pre-Castro Cuban cigars. The ambiance is important because, “a cigar is a cigar – you can buy the same stick anywhere,” he says.

There’s a reason the cartoon Dababneh can be seen wearing a Cubs jersey on his website. He was born in Chicago in 1972 to Jordanian parents. His college years were spent studying business at the University of Indiana and Loyola University. He started a graphic design company while he was still enrolled at Loyola.

His love of cigars began when he had a celebratory smoke after his high school football team won a conference championship. Dababneh got into the cigar business while running his graphic design company when he was helping his uncle with his liquor store and he had a friend who distributed cigars. He started by putting some in cabinets to sell to customers.

The young entrepreneur knew he was on to something when they sold out in a couple of weeks. Dababneh started putting humidors in bars and retail locations and giving the retailers a 20 percent cut. Soon after he planned to open a retail store in the Chicago area when a friend in the Tequesta area talked him into being a partner in 1998. In 2002, Dababneh opened a second store in West Palm Beach with a different partner.

A crucial turning point for Dababneh came a few years later when he was approached by a third partner for his third store and had reservations about building a business with multiple partners. With the goal of consolidating the ownership structure, he took eight potential investors to a steak dinner at a City Place restaurant and his accountant handed out a prospectus. Only one of them even wrote a letter back, and it said he had problems with Dababneh’s concept.

“I was bummed out and gave up on the idea,” Dababneh says.

His wife said he should talk with his friend Harry Hersey Jr., who was a motivational speaker and had a multi-level vitamin marketing company. Hersey went for it.

“He was probably not only the best partner I ever had but one of the greatest human beings I’ve known,” Dababneh says. “He had a knack for bringing the best out of you. He always said as a partner, “This is your business, I know you know what you are doing.””

Dababneh has had his challenges along the way. His third store opened in 2006 in Port St. Lucie, a fast-growing area that was subsequently devastated by the Great Recession. It has since turned around. Hersey wasn’t enthusiastic about a Pompano Beach location, but Dababneh bought it in 2008 and made it into a more upscale experience. Hersey died in 2010, but his estate is still a partner with Dababneh.

Dababneh has licensed the Smoke Inn brand to five locations, which have different owners.

Dababneh has transcended being a typical retailer with his Microblend Series and the Sindicato cigar company.

He took a chapter out of the microbrewery playbook by coming up with the Microblend, which is made in partnership with industry names including My Fathers Cigars, Padron and Havanna Cellars. The concept is a limited run of about 750-1,500 boxes. Dababneh says one problem with mass produced cigars is the quality can vary over time with factors such as differences in harvests.

The Anarchy microblend with Havana Cellars got Smoke Inn a blaze of publicity when Playboy wrote it up.

“They called it Not your grandfather’s cigar,” Dababneh says.

He tries to come up with creative packaging such as the Bunker Buster, which comes in packaging that looks like an ammunition box. Another example is the Oktoberfest Dunkel that has a dark wrapper with white tip to make it look like a poured glass of Guinness Stout. Each box comes with a beer glass giveaway.

Sindicato was launched to help cigar retailers compete against brands that end up with the big online retailers that can operate with thin markups. Dababneh said some top 50 top retailers nationally have invested in the concept of having their own brand, which can then be distributed in their stores and with any other retailer that believed in the concept. Cigar maker Eduardo Fernandez has been involved in making the Sindicato namesake brand, which means “union” in Spanish.

Kiss My Ash and The Great Smoke

Dababneh is approaching 140 episodes on his Kiss My Ash radio show, which airs from 10 a.m. to 12 p.m. on Saturdays on the Seaview Radio stations plus kissmyashradio.com. The show, which has the motto “Life, Liberty & the Pursuit of Fine Cigars,” features some of the top names in the cigar field and includes Dababneh’s side kicks, Adam “The Brewmeister” and the “Lovely Lady M,” who manages the Smoke Inn Montecristo Lounge at PGA National Resort & Spa.

The Great Smoke, held in February, will be hitting its ninth year in 2015 in West Palm Beach. The event has raised more than $30,000 for charities, including The Kids Cancer Foundation, and includes a lot of the biggest names among cigar manufacturers. For $165 last year, attendees received 40 premium cigars, plenty to drink and food from local restaurants.

Not too bad for a guy who once couldn’t get a response from seven investors and was told by an eighth that his idea wouldn’t work.

Dababneh can smile about that now when he says, “The guy that didn’t like my concept opened two other stores that I ended up owning.”

The World of Abe Dababneh

” Smoke Inn, 12 cigar stores from Vero Beach to Margate, and one in Pinehurst, NC plus the smokeinn.com digital store

” Kiss My Ash Radio (kissmyashradio.com), a Saturday radio and Internet show from 10 a.m. to noon

” Sindicato Cigars (sindicatocigars.com), a venture Dababneh created with other retailers to provide an exclusive line of premium cigars at more than 200 stores nationally