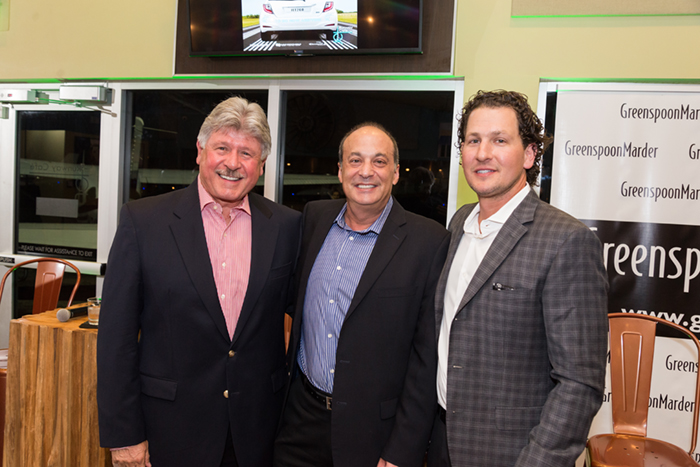 Don Campion is founder and president of Banyan Air Service, a fixed base operator (FBO) with 160 employees. It operates a pilot shop and offers services including repairs, maintenance, parts, avionics and aircraft sales.

Mike Linder is owner and CEO of Silver Lining Inflight Catering, which started in 2001 and provides concierge level services that go well beyond food and beverage service.

Linder opened Jet Runway Café after being approached by Campion. The café, which hosted CEO Connect, overlooks the tarmac at FXE and is open for breakfast and lunch Monday through Saturday. It’s also a popular spot for special events.

This edition of CEO Connect was sponsored by the Greenspoon Marder law firm and TD Bank.

Linder and Campion were interviewed by SFBW Chairman and CEO Gary Press. The following transcript has been edited for brevity and clarity.

Campion: My parents were missionaries. Dad was a surgeon and mom was a nurse. As a young couple they went to the bush in southwest Nigeria and started a hospital.

I lived there until 18. Little bush aircraft would pick me up on a grass strip and take me to boarding school.

Linder: I’ve always been in the food and hospitality industry and graduated from Florida State University. I came down here and worked in corporate restaurants.

My business partner Mitch Amsterdam, who is head chef, and I found a niche in the market and found a segue into the aviation market. As we got the ball rolling, I quit my corporate job.

We rented a kitchen. I stayed up the next seven years often 24 hours a day. We serviced Banyan as one of our first clients and slowly took over FXE, as far as providing the best service. We hired our first person after seven years.

What prompted you to found your own companies?

Campion: I went to school in Toronto. I came down here for spring break and Christmas and there was more aviation here than in all of Canada. It was my goal to leave Canada as soon as I finished pilot and aircraft maintenance training.

I started a little pilot contracting job flying a small six seater to the Bahamas. I saw the charter company was struggling with maintenance. I asked the owner if he would allow me to rent a hanger and maintain the plane I was flying. I lived at the hangar, ate at the hangar and slept at the hangar. I named it Banyan after the trees around our village in Africa.

I slowly found other people that wanted someone to exceed customer expectations and do more than what the customer asked. With that passion, we got the ball rolling.

Linder: I really didn’t have a business plan. We used to have pilots coming into our catering kitchen and saw a need for catering to pilots.

We went into this just trying to make a paycheck. I remember buying one cantaloupe at a time at Publix. I was sleeping in my car in the parking lot, and we had a business.

What’s the craziest customer you’ve experienced over the course of business?

Linder: Anything’s possible—that’s what we do. Anything from when the industry was booming on into 2007 and 2008. We were still growing, so the economy didn’t affect us. We were picking up new clients.

We have done everything from picking up pets at pet stores, so kids in the back of the aircraft would have something to play with.

At this point, there’s nothing strange in the kitchen anymore. We say yes, and we figure it out. We provide the best customer service. One of our training procedures is we have somebody call and ask for the most random things that don’t make sense and see if they say yes.

We’ve supplied about everything they have at Whole Foods. On a daily basis, we deal with all the new diets and new allergies.

Campion: The people demanding that food is what we serve. There are a lot of celebrities.

It’s really more notable how our teammates handle customers. If an elderly person is struggling to walk in the lobby, they will bring in a golf cart. If a pilot spills ketchup on a white shirt, our people will bring a clean shirt.

What’s the biggest challenge in growing your business?

Campion: Building trust in aviation. We are a Federal Aviation Administration repair station. We rebuild engines. We do major inspections on aircrafts. We upgrade electronics and install Wi-Fi.

In the early days to have that element of trust and for them to leave their airplane with you was a big deal. South Florida had a Wild West type of atmosphere that didn’t contribute to that. Trying to build a business founded on integrity and trust was difficult.

Linder: I have to say our team is amazing. Developing the team and giving up some of the reins was the hardest thing.

It took 16 years to build this from the beginning to now—building the right team and finding the right people and putting a training procedure in place.

What are some of the key opportunities that came across your desk?

Campion: Our business is very capital intensive. It takes a lot of space to have hangars and ramps.

In 1985, I was 28 or so and hooked up with Jerry Holland of Holland Builders. He had purchased an airplane and kind of liked the idea of the hangar business. He had a parcel that he was looking for someone to lease from him, and all I had was a small maintenance shop. He asked me if I wanted to get into fueling. He took a chance on me.

That relationship has grown to 120 acres on this field and a million square feet of hangars.

We hooked up with Comerica. They really put their trust into us, which allowed us to provide four aviation businesses on this field. It’s a partnership. We really wanted to create a customer experience: If you come to the Banyan complex, you could enjoy more aviation services than perhaps anywhere else in world.

Mike came with the restaurant and we have flight schools, air ambulance and charter companies. I started to offer them buildings that Holland was getting ready to build. By selecting them, we made this a center of aviation activity. It’s one of the busiest in the world as it relates to business aviation.

Linder: We have a unique way of doing things. We never have a business plan. We didn’t approach Don about a restaurant, he approached us. We were a couple of little guys, and we didn’t know what we were doing. We initially said no but approached him again in 2009 and said we were ready. I remember in a year we were ready to open.

We say yes to everything and don’t keep ourselves in a box. When everything becomes busy, we make a new business out of it.

Over the past years we have grown events at FXE. We have a hangar connecting next door that is Don’s that we use for events. We noticed we were paying 60 to 80 percent of what an event costs to rigging, lighting and decor companies. We got into that business and have 35,000 square feet full of furniture, decor and a wood shop. We are kind of back into every business as needed. We talked about expanding Silver Lining to other states. We’ve talked about the Bahamas and other islands. We tried and did. We have talked about moving into California and New York. We have maximized our growth in South Florida.

What are you thinking about doing over the next couple of years?

Linder: We get calls every day about selling or expanding this place. We would only expand to another airport with a great view. We were the No. 1 caterer around the country [in Professional Pilot magazine] the last six years in a row. We bend over backwards for everyone out there.

Campion: We have 200 teammates at Banyan and are always increasing our capabilities. We now have 13 countries where we are certified for repairs. We recently took on Mexico. Our customers can go back to their countries and not be re-inspected.

Campion: What keeps us up is: Are we giving the customer the best value by having the best teammates leading their departments?

LINDER: Since the day I started, the minute I leave the office or before I go to sleep, I call 10 clients and email 20 people. I make phone calls to every kitchen and every leader that is still at the kitchen just to see how we are looking for tomorrow.

We have a team that I can trust, but I’m still up every night waiting for the next morning.

Earlier, Don, we were having a conversation about giving back and I heard this wonderful story about your company and how you take your team and go back to Africa.

In 2008, it had been 25 years since I was at the mission station, I wanted to take my wife, Sueanne, and show her where I grew up in Egbe.

The hospital my parents had founded was about ready to close. We really felt God was calling us to rebuild the hospital. We asked God for signs that it was meant for us to put energy into that.

Now, we have 11 doctors living there. 400 Americans have rebuilt 45 buildings. We just got back from Nigeria. We took 22 people there.

I just returned from Africa and 3,500 villagers named myself a chief. The website is egbehospital.org. ♦