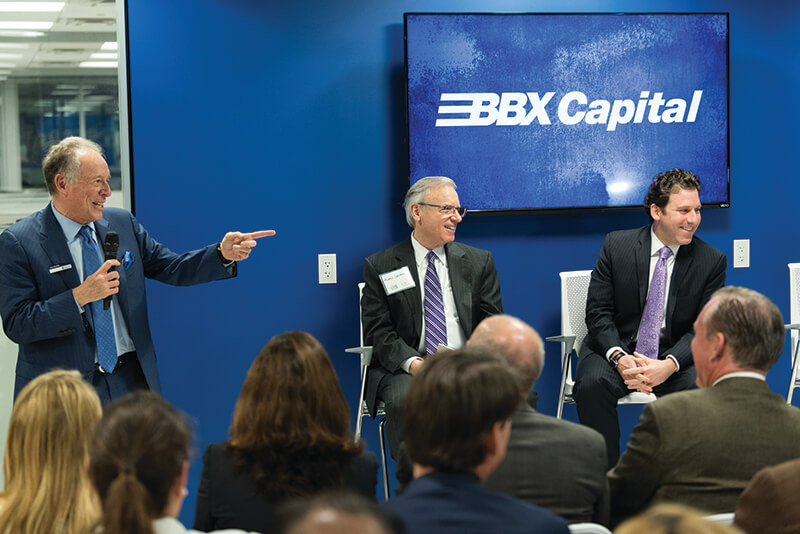 SFBW Chairman and CEO Gary Press interviewed the father-son duo of Alan and Jarett Levan at BBX Capital’s Fort Lauderdale headquarters for this month’s “CEO Connect” feature. Alan is chairman and CEO of BBX and chairman of Bluegreen Corporation, a wholly owned subsidiary of BBX Capital.

During his career—more than four decades—Alan has chaired four New York Stock Exchange-listed companies and raised more than $2 billion in debt financing and equity. In 1971, at age 27, he founded IRE Financial, the predecessor to BBX, and, over 10 years, raised hundreds of millions of dollars and built a $1.5 billion national real estate portfolio.

In 1984, he acquired control of BankAtlantic and built it into a 100-branch, $6 billion Florida banking franchise. Later, he led its sale to BB&T.

He chairs the finance committee for the Nova Southeastern University board of trustees, and is founder and chairman of the BBX Capital Foundation (formerly the BankAtlantic Foundation), which has contributed more than $15 million to the local community.

Under his leadership, BankAtlantic was named Florida’s top bank for customer satisfaction in 2010 by J.D. Power. BankAtlantic also operated with one of the lowest cost of deposits in the banking industry.

This conversation has been edited for clarity and brevity.

Give us an overview of BBX capital and its current state, and what you’ve been able to accomplish since the Bank Atlantic deal.

As we got into 2007, 2008, 2009, it became obvious to us that our appetite for being in the business diminished significantly. So we structured a transaction to sell to BB&T. And we kept every single loan—and keep in mind this was during the Great Recession—that had what we referred to as a scratch or a dent … this was a foreclosure, this was a late payment.

We said to BB&T, “Instead of paying us cash for this franchise, we’ll just take the real estate that you believe and everybody else believes is garbage.” We kept $600 million of junk, which all turned out to be gold. It didn’t take a rocket scientist to know that.

I’ve been through the recessions of the ‘70s, and the ‘80s, and the ‘90s, and the good news about Florida—the reason why we are here—is that Florida always comes back stronger than when we go into a recession. The only thing you have to do is figure out how to get to the other side of the recession and you can reap the spoils that existed.

We had great real estate, and we started selling off some of it, and we started developing. We worked with terrific developers like Joel Altman. He was building spectacular apartments and we wanted to participate in that. We participated in a project with the recently deceased Terry Stiles and the Stiles Co. that we just completed, a 400-unit housing development in north Hialeah off [Interstate] 75. We’ve always been an eclectic kind of company. Even when we had the bank, we had other businesses at the same time, under the same umbrella.

We have a hospitality company [Bluegreen] with 66 resorts, and we have a whole bunch of candy companies. And people ask us all the time: What’s the strategy? How do you decide what you are going to buy? And Jarett is a good barometer of that. The answer is, if we like it and we can afford it, and if we think we can manage it, we’ll buy it. We are what is called a diversified holdings company—one of those kinds of companies that Wall Street says can’t possibly exist.

Jarett: The only thing I’ll add to that is one of the pieces of the puzzle of business operations is great people. We have terrific management that operates each of these companies, and BBX works with management on strategy, on budgets, on major decisions. We have really good people.

One of the things I’ve noticed, when I meet anybody who works with you or has worked for you, is most people say you guys have a great culture.

Jarett: We look at culture in two ways: structural and behavioral. Structural is the financial discipline, the compensation plans, the hiring practices. Behavioral is the relationship building, it’s the happy hours, the team building and community service. Companies have one or the other; we have both. We work hard, we play hard. We care deeply about our employees and they care deeply about us and the company. It’s all about mutual respect.

We take the position that, if that was important to us, it is also important to our employees. Why shouldn’t they have the same ability to do that? So when somebody says, “I have to go because I’m going to be late for a ball game,” we understand. They have to get their work done, yes, but they don’t have to be in sight. Their personal lives, their family lives are just as important to them as is work, and I think that goes a long way. We care about who they are and what they believe in, whether it’s religious or it’s giving back or its their children. If it’s important to them, it’s important to us.

Jarett, what’s the biggest lesson you learned from your father?

Jarett: Persistence. Many father-son relationships don’t work because the father wants his son in the business and he won’t let his son do anything. In my case, that was never a problem because, from an early age, my father brought me into the business and allowed me to make my own mistakes, which I’ve always appreciated.

The biggest lesson I learned goes back to the BankAtlantic days, which is simply: When you get to the top of the mountain, look around the corner. Because you always have to prepare for what is coming next and have the capital, the resources, the people, the strategy that prepare you for what might be lurking around the corner. Another way to say it: Failure lurks in the shadow of success.

What’s the biggest disagreement you’ve had with Alan?

Alan: Jarett was a unique child. Our other kids would say, “Yes, Dad.” Jarett would say, “That makes no sense.” I would say, “I’m your father. Just do it.” And he would say, “Well, why would you ask me to do this, if it makes no sense?” He was never the child who would ask why the clouds were white or why was the sky blue.

When Jarett was younger than 10, we were butting heads all the time. He would not listen to my fatherly commands. One day, his mother came to me and said, “You know why you don’t get along with Jarett? He is just like you.”

From that moment on, Jarett and I have never had a disagreement that raised to a heightened level. We’ve disagreed in business, but after we’ve expressed our sides, we would follow each other’s advice or sometimes we wouldn’t. Sometimes, it turned out great, and other times, it turned out wrong. But neither of us use the “I told you so” phrase. As a result, we have a lot of mutual respect for each other, and we both have skill sets in certain areas. Jarett is a better communicator than I am, and I utilize his strength at work and so forth. ↵

The evening begins with a cocktail reception for about 100 guests followed by the highlight of the event, a live interview conducted by Gary Press, SFBW Chairman and CEO, and a well-known C-level executive who provides insight into their personal lives, careers and views on issues affecting the business community.