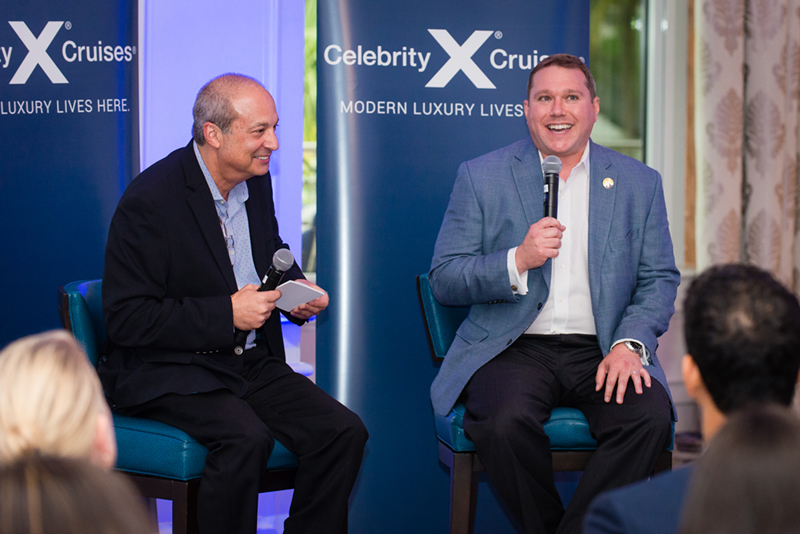 Daniel Cane is CEO and co-founder of Modernizing Medicine of Boca Raton, a digital health care record system for six different medical specialties. Since founding the company in 2010, Cane has led his team to raise more than $318 million in funding and to employ more than 550 people. In May, Modernizing Medicine announced it had raised $231 million from Warburg Pincus, a global private equity firm.

Cane has a bachelor’s degree in applied economics from Cornell University. As an undergraduate, he co-founded Blackboard, which brought new technology into classrooms. Blackboard raised more than $100 million in venture capital. In 2004, he helped take the company public. In 2011, Blackboard sold for $1.6 billion.

He came up with the concept for Modernizing Medicine while visiting dermatologist Michael Sherling for a routine skin examination. He noticed Sherling used paper charts. Cane and Sherling, who is Modernizing Medicine’s chief medical officer, decided to specialize in electronic medical records for specific specialties.

In 2015, Cane was named Ernst & Young Entrepreneur of the Year and honored by Florida Gov. Rick Scott with the Business Ambassador Award. Cane is vice chairman at the South Florida Science Center, on the board of United Way of Palm Beach County, and is vice chairman of the board of trustees at Florida Atlantic University.

He was interviewed by SFBW Chairman and CEO Gary Press at the Polo Club of Boca Raton. The following transcript has been edited for brevity and clarity.

Congratulations on raising $231 million. How did you do that?

When raising capital, we didn’t go out to raise that much money. I’m a firm believer in raising what you need to get to the next level of profitability. Modernizing Medicine raised $90 million in financing and it was over five rounds of financing. Our first raise was $1 million, then $4 million, then $13 million and then $30 million. We worked our way up. The best time to raise money is when you don’t need to raise money; otherwise, you get really bad deals. We had reached our profitability on our fifth plateau. We are doing about $100 million of recurrent revenue.

Modernizing Medicine goes well beyond just storing data in the cloud to helping doctors make good decisions. How do you do that?

Modernizing Medicine is next-generation technology when it comes to using data to improve outcomes. We’ve got about 141 million patients in our platform. We have 10,000-plus providers and users. The idea is that if we standardize a way we collect information, everyone will begin speaking the same language and improve patient outcomes.

We harness that collective wisdom of the masses, so, statistically, based on a disease’s severity and the location and who you are—your age, race, ethnicity, gender and your allergies and medications—I can use data to show the physician statistically what might lead to better outcomes.

We also use data to make it more efficient. If I can get in the head of the doctor, I can save them time. Because everything we do is on an iPad, the more they use it, the faster it gets to predict what they are likely going to do the next time. I’m shaving seconds, but it adds up. So over a course of a patient encounter, I might save a doctor two to three minutes, but they’re seeing 60 patients. So, I just saved two or three hours of time. And a funny thing happens—they don’t see more patients, they end up spending more time engaging with the patients in front of them. Their quality of life is higher and they aren’t staying two to three hours after clinic to catch up on documentation. That’s all done in real time. And that’s the reason why the company has grown so quickly.

A lot of tech leaders complain about talent here, but you actually seem to be addressing that issue by partnering with colleges and universities. What’s the strategy?

We have amazing talent down here. We have anchor universities producing high caliber talent. So instead of complaining, I went and engaged with Lynn, FAU and NSU [Nova Southeastern University]. I said, “Look, we are hiring your graduates and here’s what they are missing.”

When you have a great culture, people genuinely want to be a part of it. And then you complement that with the financial success we’ve had, you get the perfect storm of getting people wanting to be here. The issue we have is talent leakage, people going out of state. And they don’t realize there are great companies down here that can be interesting. We’ve got Ultimate Software and Magic Leap. We are sitting a quarter-mile from where the personal computer was invented, in Boca.

You co-founded Blackboard and sold it for $1.6 billion. How much did you make off the sale?

Less. A lot less. As college freshmen, we knew nothing when we started that company. I would argue, even today, I still know very little but I am starting to figure a few things out. Back then, what I didn’t know was evolution. We raised a ton of capital, thinking that more capital means more growth. What you don’t see is that all the venture capitalists and private equity funders putting money in have all sorts of downside protections. I was incredibly naive and I joke that I got a $300 million MBA, because that’s all the money raised before we took the company public.

Does the amount of money raised by Modernizing Medicine and Magic Leap indicate that South Florida is more on the national stage now in the world of venture capital and private equity?

I think South Florida is being taken more seriously. There was a time when I first moved down here that raising more than $300 million was almost laughable. We chipped away at it, but it was Magic Leap that put a big wall on the whole thing, so I have to give them a lot of credit.

I think we hit the inflection point because of awareness and media and because the world is smaller and people are paying more attention. Motorola invented the smartphone right down the street. IBM invented the PC. These were giant game-changing things. People didn’t put the words “Boca Raton” next to them, but they should have. Now we are doing a better job as a region. We are making a lot of noise in technology, in banking and in health care. And these things matter.

Often times, founding CEOs will leave rapidly growing companies when they hit a certain level. Do you think that will happen to you?

I got to grow Blackboard from the founding to the IPO to the exit to the private equity. It is a very different skillset at each stage. The type of entrepreneur and businessperson you need to be when you are struggling to make your first $100,000 and then $1 million is very different than the operational expertise it takes to grow a company of hundreds of thousands of employees. And I don’t pretend that I can do all of it. My gift is teams. I can surround myself with people who know how to do that and I can empower them in ways that’s genuine. I don’t know, even after doing it twice at each stage, but, man, my team does. I have an incredible CFO, COO, CTO, and they know what they are doing and I trust them to do it.

And yes, I and Michael Sherling paint the vision, but it is just as much as my executive team and employees’ company as it is my own. That works and helps us grow. So, as long as they will have me, I’m going to stay.

Well, this capital raise. We got to celebrate it for 45 minutes and then I realized I have a massive investor who has 231 million reasons to see me successful, which I liked and I slept well until I realized the return they want to get on that capital was substantial. I now need to go build a multibillion-dollar company. That’s exciting. It’s positive stress, when I think about it. ♦

SFBW’s CEO Connect series is an exclusive, invitation-only monthly event that brings together South Florida’s top business leaders to meet, mingle and talk among their peers.

The evening begins with a cocktail reception for about 100 guests followed by the highlight of the event, a live interview between SFBW chairman and CEO Gary Press and a well-known C-level executive providing insight into their personal life, career and views on issues affecting the business community.