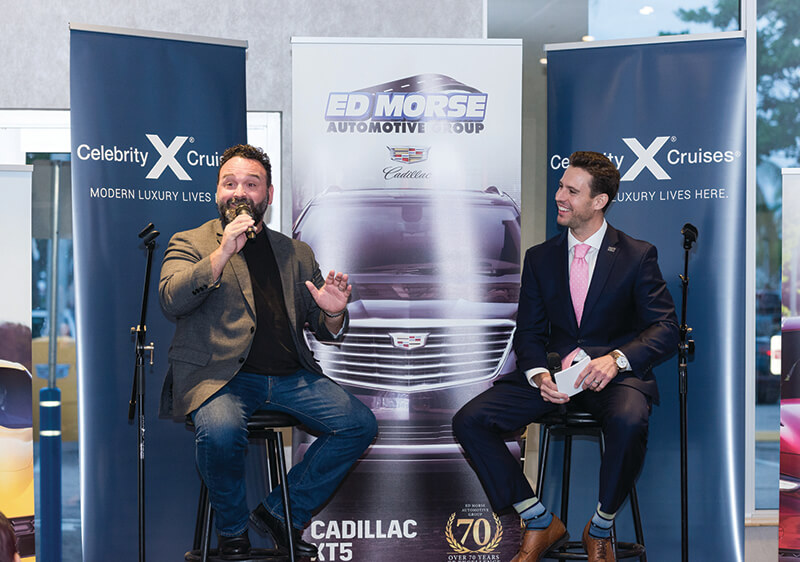 Teddy has been in the automotive business almost his entire life. His grandfather, Ed, founded Morse Motors, a rental car company in 1946. In the late 1980s and early ’90s, Ed Morse Automotive was the first dealership group to exceed $1 billion in fleet sales.

His father, Ted, became chairman and CEO after Ed died in 2012, at the age of 91, but he had to work his way up, starting as a gofer and detailing cars while he was still in school. After going to Northwood University (now Keiser), he sold cars at the Honda dealership and later handled finance and insurance, and became assistant general manager at the Cadillac dealership in Delray Beach. His first GM job was at Bayview Cadillac in April 2008. The Fort Lauderdale dealership was named Cadillac’s dealer of the year twice during his four years in that position.

He joined the corporate staff in 2012 as director of advertising and marketing, and became CEO last year after the death of his father.

And what’s the car you are driving now?

The car is a 2017 GMC Sierra 1500 pickup with a 3-inch lift kit and 33-inch tires. I actually got it when the hurricane was coming because I needed something that would get me out of my neighborhood. I was staying out east and I was one of the idiots that refused to leave. And so I made sure I had the vehicle that would be able to get me out if things went bad. I have so much fun in that truck. I took a drive down [State Road] A1A, and until you drive a monster truck, you don’t know how fun it is. The road was covered in sand from the storm.

Did Hurricane Irma affect your business?

In the short term, it affected us quite a bit. When it comes to selling cars, a big part of it is that people need to have insurance when they drive off the lot. Three days prior to the hurricane possibly making landfall, insurance companies—boom! —they cut you off. You couldn’t get new cars insured. It shut down operations for about three days prior to the hurricane and a few days after because we had a number of dealerships without power. We are in a business, luckily, where people are very set on buying cycles. People are going to buy a new car every three to five years, so being shut down for a few days during the hurricane isn’t going to make somebody not buy the car. It might delay it for a few weeks. We were very blessed.

Your father put you through some hard knocks early in your career. Tell us about some of the things he did with you and what your relationship was like?

I was extremely blessed to have one of the best father-son relationships I’ve ever heard about. My dad was an amazing guy.

He busted balls a lot, which I didn’t understand at the time. When I was 15 years old, I was detailing cars at our Mazda store in Coconut Creek. And I didn’t even get to clean the new cars coming off the truck. I had to detail cars that were coming out of the body shop that had overspray on them. I’m out there with a 40-pound buffer on the side of the vehicle, it’s August, and its 99 degrees.

He had me work every job in the dealership as I was growing up. And I can’t tell you how much that means to me now having done that. From that experience, I can understand what our employees do and care about what they do because I’ve worked the same jobs. What my dad did for me was invaluable.

What else did he teach you?

The car industry is undergoing rapid change with the emergence of electric cars and potentially self-driving cars. Do you think electric cars are moving towards a majority of sales in the industry?

I think they are phenomenal. One problem we see with electric vehicles is what is called range anxiety. People are very nervous about their car running out of juice and being stranded on the side of the road. We have the Chevy Bolt that can go up to 238 miles per charge, but until we can get that range higher, to 250 to 300 miles, it’s going to hamper sales a little bit. Also, we need to get the charging to where you can charge a vehicle fully as fast as you can fill a tank of gas. A lot of electric cars take up to eight hours to fully charge. And there’s a lot of rapid-charge devices you can get that will bring it down to four hours, and maybe there are some that will do it in two. But that’s a long time to charge.

When do you think we will see self-driving cars introduced to the marketplace, and what challenges and opportunities does this create for your company?

What I think will happen is that we won’t just have self-driving vehicles, but it would be an option in your car like the cruise control. You can turn it on when you want and turn it off when you don’t. It might be one day that nobody will be driving on the road, but that’s maybe in 50 years. I think it will be a technology that is implemented in the vehicles that we have now. ↵

The evening begins with a cocktail reception for about 100 guests followed by the highlight of the event, a live interview conducted by Gary Press, SFBW chairman and CEO, and a well-known C-level executive providing insight into their personal lives, careers and views on issues affecting the business community.

This CEO Connect was held at Bayview Cadillac in Fort Lauderdale