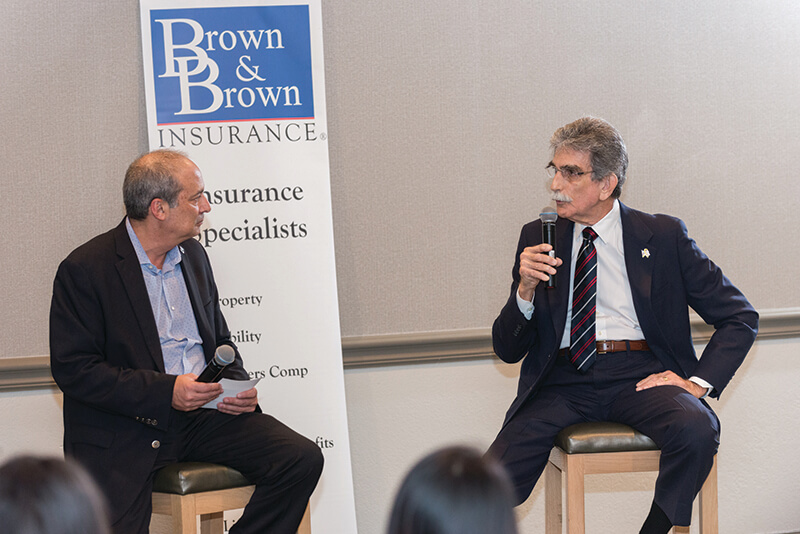 Giving Back in Meaningful Ways

Stephen B. Moss is a partner at the Holland & Knight law firm, specializing in real property development law, hotel development and operations, title insurance and business law. Moss began the practicing law in 1971 after two years of active military service in the Army, including a year in Vietnam. He serves on the board of directors for United Way of Broward County and is the founding chair of its Mission United Advisory Council.

For the latest installment of Veterans of Influence, SFBW Chairman and CEO Gary Press interviewed Moss at the DoubleTree by Hilton Hotel Deerfield Beach-Boca Raton. This transcript has been edited for clarity and brevity.

I want to talk about Mission United and your career. You were inspired to help veterans after your daughter, Shannon, was injured during Army duty in Iraq. It must have been horrible hearing about that. What happened to her, what caused your frustration as she sought help?

Our daughter decided to join the Army like her dad did. She wanted law enforcement as a career, so she joined the military police corps. And while she was in military police school in Missouri, the Iraqi war goes bad. So, there was an exchange and she went to Baghdad as her first tour of duty. While she was there, she ended up severely injuring her left shoulder.

She didn’t tell us until she got home. And then she told us that she had two choices: She had three months left of her tour of duty or tough it out with the troops. The real difficult thing when she came home, she had a MRI done that revealed that she had tendinitis. The Army decided that she couldn’t go back to Iraq and gave her an honorable discharge. It took two years for her to get the surgery she needed, and it was four hours of major reconstructive surgery.

We met with her doctor and he said that the system had failed her because two years was too long of a wait, and that she would have a permanent disability in her shoulder. But he told us about an intensive physical therapy program for her to do that would take six months.

We learned that she would get her disability benefits from Veterans Affairs, but there was such a backlog that it would take about one year for her to get her first check. Shannon is not shy and she said to them that she has parents who would help support me because I can’t work. And she questioned, “What happens to other men and women who don’t have financial support from their families?” The VA representative said, “They go homeless.” And that was a defining moment in my life. And I thought that I hope someday something will happen that will allow me to give back and help to other women and men who have served. Then the United Way of Broward County came in.

She’s doing well, and she’ll always have the disability. She met her husband in Iraq, which is a great love story. He was also in the service. They just moved here late last year, and they are very happy.

Have you seen any improvements under new VA director David Shulkin?

Yes, there are improvements happening. I’ve met with the VA at the headquarters in Washington, D.C., and there’s just so much bureaucracy. The United Way of Broward County made an announcement that it was going to do something that the United Way hasn’t done before in our country. And that it was starting a program called Mission United, which would reach out to veterans in our community. They were seeking volunteers. I was asked to be the founding chair. One of the best success stories of Mission United is our relationship with our local people. Dr. Phillip Greenberg at the Miami VA Healthcare System hospital is phenomenal. The William “Bill” Kling VA Clinic on Commercial Boulevard is outstanding. And we are giving great care for our veterans in South Florida.

What kind of services does Mission United provide?

We provide a holistic type of service, which is all encompassing. What’s important to know is that the United Way became a catalyst of getting the community together. We invited all the nonprofits to come talk to us. We wanted the United Way to become better, and we also wanted to collaborate with all the other nonprofits. We work together so effectively seamlessly. That’s what we’ve established. It’s the whole community making it work with the United Way.

I’m proud to tell you that, since we launched in 2014, more than 19,000 former homeless veterans or veterans facing foreclosure now have safe, affordable housing and they have jobs. Through the [Americans with Disabilities Act], we just received our fourth year of $2 million grants for each year for a total of $8 million.

We provide employment oppor-tunities, working with Career Source Broward and human resource personnel from various businesses. We do career boot camp training, so they are prepared the workplace. We help them with their résumé and skill set.

We have legal services. The United Way has funded two full-time attorneys and one full-time paralegal, and we have more than 400 lawyers in the area who volunteer for us. We have financial services and emergency financial aid for education and health care services. It’s bringing it all together. And what will happen is that a veteran will call 211 on the phone and ask for help. Then they meet with one of our case manager. It’s not a Band-Aid that we want to put on there. It’s not a quick fix. It’s a long-term solution we are looking for. We ask, “What is the reason why you are in this situation?” “Well, I just lost my job” or “I’ve been downsized at my company, and it pays half of what I earned.” “Let’s get you a better job with more money.” ♦