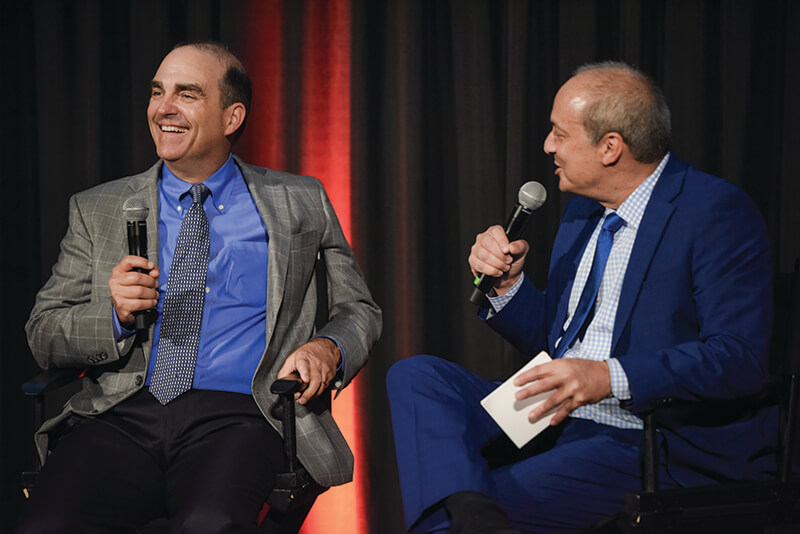 Mark Zoradi has served as Cinemark’s chief executive officer since August 2015. Headquartered in Plano, Texas, Cinemark Holdings is a leader in the motion picture industry with 533 theaters and 5,964 screens in the United States and Latin America. It is the country’s third-largest theater company, with 339 theaters and 4,566 screens in 41 states.

It has South Florida locations in Davie, Boynton Beach and Boca Raton.

Zoradi spent 30 years at The Walt Disney Co., most recently as president of Walt Disney Studios Motion Picture Group. Before that, he worked in a variety of positions at Disney, including general manager of Buena Vista Television and president of Buena Vista International with responsibility for the international marketing and distribution of Disney, Touchstone and Pixar films for theaters and home entertainment.

SFBW Chairman and CEO Gary Press interviewed Zoradi in front of a live audience at Cinema Palace 20 in Boca Raton. The following transcript has been edited for brevity and clarity.

I’ve got to say two. I absolutely loved “Gone With the Wind.” My most favorite modern movie is a series of movies, and it’s because they were so near and dear to our heart. I was at The Walt Disney Co. when we bought Pixar, when it wasn’t called Pixar. They were making little commercials. The first time I saw “Toy Story” and the follow-up with “Toy Story 2” and my favorite movie of all time, which was “Toy Story 3,” the end of that trilogy … there’s a fourth one coming out next year, too.

Disney is seen as one of the greatest companies in the world, providing entertainment. What was it like to work there?

I started to work at Disney right out of business school, and they were a small company at the time. I know that it doesn’t seem like that today. In fact, it was May 1, 1980, and we were just starting up the home video business, if you remember that. For those of you who are old enough, you can remember those VHS tapes and those Beta tapes. Well, I was fortunate enough to have done my master’s field study project in this area of this new business. When I got a job there, I was the first employee hired at Walt Disney Home Video. So, we took 20 movies—“Mary Poppins” was probably the highest one and then a lot of catalog things, like “Hot Lead and Cold Feet”—and Mickey Mouse cartoons, and we put 20 of these out on video. It was very exciting.

I was really fortunate to be there when Disney was small and growing. About three years later, a team of us got the opportunity to start the Disney Channel. And we knew little about cable television. We made a lot of mistakes, but we did a few things right. And then, I got to grow with the company. I was in the right place, at the right time and I also loved movies. It was a good cultural fit for me, and I happened to live in Burbank, California. And that’s where Disney’s headquarters is, so I was one of the few Los Angeles people that had no commute. It was a great 30 years there.

Give us an overview of the company’s growth since you become CEO and what your upcoming plans are.

When I started at Cinemark, I had left Disney and I thought maybe it was time to retire. My wife has said that I’m failing to retire two times, and if I fail a third time, I’m out. Anyway, I was on the board of a company that Cinemark bought. It was called Rave Motion Pictures and now is called Rave Cinemas. They had about 500 screens. Then I got the opportunity to be on the board with Cinemark. And it wasn’t too much longer that the CEO retired, and I was given what I thought was an opportunity of a lifetime. And I knew a lot about the company because I was on the board and also they were a key client of ours at Disney. We would make the movies and Cinemark was effectively the retailer. I was excited to join them because I knew it was a good company. And it was not a turnaround, it was a good and solid company.

I felt like if I continued the positive culture that was there and made some improvements along the way, then I would be successful. And I want to give credit to Lee Roy Mitchell, who started Cinemark. Today, he’s the chairman of the board and he owns 8 percent of the stock. He instilled in the company a very family approach and a desire to do customer and guest services.

If there’s one thing we try to distinguish ourselves with, it is guest service. … The two places that we try to emulate is, one, what it feels like when you go to Disney—the way you are greeted and dealt with. And the second one, on the retail level, is something like Chick-fil-A. They have thousands of stores across the country, and when you go to them, you are treated like a valuable customer.

How important is South Florida to your organization?

South Florida is very important to us. We’ve got three great theaters here, in Davie, Boca Raton and Boynton Beach. Last year, we spent $380 million in improving our theaters and building new ones, trying to make sure they offer a great experience for our guests. There is not another theater in our entire worldwide operation that we spent more money in to improve than at the Boca theater. It was the single, most important redo.

One of my favorite parts of the business, I thought was going to be the film side. But where I got the most upside, and the greatest learning curve, was the real estate side of our business because we own land at about 42 of our theaters. But, at most of our buildings, we have a landlord and lease. We commit to 15-year leases, so we study the demographics very carefully. We look at income levels, where we think we can get our clients from, and if there are enough people to get a return on investment we are putting in. We only build six to eight new theaters in the U.S., and maybe eight to 12 new theaters in Latin America, each year.

Do you have different types of concessions from one theater to another, depending on the economics of the area?

Yes. For example, we don’t serve alcohol at our theaters in Utah. At our theaters in south Texas, what you see at the snack bar is very different than what you’d see in the Northeast, simply because tastes are different. The Boca Raton theater is a sort of flagship for us, and what we offer for food is about as good as it gets. This place is like a palace.

A ribbon-cutting was held to celebrate the theater

When you are looking at which movies to screen at which theaters, is that a big decision?

Like food, we will program theaters depending on the area of the country. There are certain areas that have more families, so we will play more movies for them, and there are some areas that play well with art-house movies—we have a brand called CinéArts, which plays independent films. And there’s a film team that sees every single movie, and they make a decision on how many runs—and when I say “run,” that means how many theaters it will play in—and how many screens within that theater to play in. And then the local guys and women will make a decision on how many shows during the day we will play.

You also have a movie subscription plan. How does that work, and how has that helped the company’s success?

We considered a number of different programs, such as an all-you-can-eat plan. We considered, what I think is more user-friendly, that if you don’t use the subscription for one month, you don’t lose it. Think of your old cellular data plan. If you didn’t use your data, what happened to it? It rolled over. So we decided to come up with Movie Club. We launched it last December. I told the board to expect 200,000 members by the end of the first year. Well, we hit that in six months. The essence is you pay $8.99 a month. You get a credit on your phone because it is app-based. If you don’t use it during a month or two, you don’t lose your credit. And when it comes time to when you want to use it, you can use them all and you can bring a companion if you want. You can reserve your seats online with no fee. And one thing that people love is the rollover and the 20-percent discount on all concessions.

We tried to make it really simple. My son convinced me that it needed to be app-based and easy to quit. So, you can quit with one click, if you want to, and we don’t make you call a 1-800 number to quit. It’s been amazing how many people have stayed on because it’s so simple and consumer-friendly.♦